Celebrating its 55th anniversary in 2022, the annual SEMA Show has evolved to fit the times, reflecting and responding to changes in the specialty automotive industry, and this year’s Show should be no different. With an extra 600,000 sq. ft. of exhibition space courtesy of the new West Hall, last year’s Show provided attendees with more room to conduct business in a collegial environment while still having ample space to enjoy a dazzling array of enthusiast events, builds, competitions and networking opportunities. The 2022 Show promises more of the same. 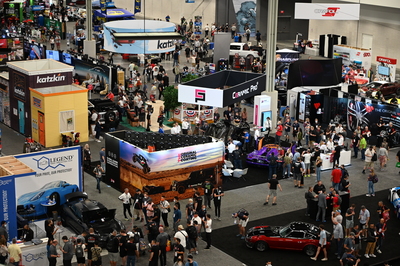 While the SEMA Show floor is organized by category and numbered to improve navigation, an ideal way to simplify the Show experience is with the 2022 SEMA Show app, which contains detailed exhibitor information, interactive floor plans and daily event information—all accessible from mobile devices.

The Show app also features a scanning function that allows attendees to capture product information from the New Products Showcase and exhibitor information from feature vehicles on display. The app puts the entire SEMA Show in your pocket, and it’s available as a free download from your mobile device’s native app store or by logging on to www.SEMAShow.com/app.

SEMA Award winners are determined and voted on by SEMA Show exhibiting manufacturers to recognize vehicles that manufacturers are investing in and developing products for. The program heightens awareness for aftermarket products and exemplifies the industry’s partnership between automakers and aftermarket manufacturers that develop products to improve vehicle performance, safety and convenience as well as appearance and comfort. 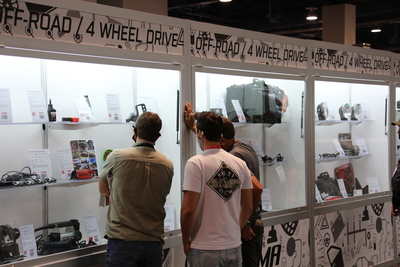 A first stop for many attendees, the New Products Showcase provides Showgoers with an up-close opportunity to examine the more than 2,500 new products on display at the Show.

A first stop for many attendees and a must-see for everyone else, the New Products Showcase provides a window into the automotive aftermarket for the coming year as hundreds of manufacturers roll out their latest innovations. In all, the 2022 New Products Showcase is expected to exhibit more than 2,500 new and featured products in a brand-new, 30,000-sq.-ft. exhibition space in the Upper South Hall. For 2022, two additional product categories will be added to the Showcase: advanced driver-assistance systems (ADAS) and EV technology.

The New Products Showcase enables buyers to focus their efforts on the companies they need to see to keep the product pipelines active and their inventories fresh, and media attendees can get a glimpse of the latest trends to emerge from the industry’s leading influencers. Additionally, scanning products with your mobile device using the SEMA Show app enables communications between buyers and exhibiting companies to generate leads and drive future sales. 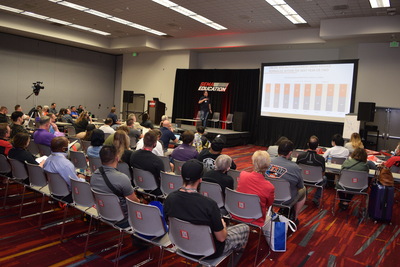 Throughout the week, SEMA Education hosts more than 100 seminars, workshops and demonstrations hosted by industry professionals.

This year, SEMA Central expands to offer Showgoers a more immersive industry experience than ever before. Visit this Show hub to see top-tier vehicle builds and center-stage interviews with iconic personalities. There’s even a boutique shop to outfit you with the latest SEMA Gear.

SEMA Central is also the place to see celebrity appearances, to take in daily panel discussions and Brew Talks with some of the industry’s most notable and knowledgeable figures, and to get an up-close look at last year’s Battle of the Builders winner Bob Matranga’s classic ’55 Chevy, which will be on display during Show Week. SEMA Central is also the site for the finals of SEMA Launch Pad, SEMA’s annual competition of automotive entrepreneurs. (See page 52.)

The SEMA Show is renowned for the innovative parts and accessories displayed on show vehicles representing every industry niche, from cars and trucks to powersports. Much more than rolling works of art, the vehicles offer an in-person look at real-life applications of the aftermarket’s latest and most impressive products.

Located throughout the Las Vegas Convention Center, inside and out, the displays connect with Showgoers as an extension to the exhibit booths of the product creators. The SEMA Show app features a scanning function that allows attendees to quickly capture product and exhibitor information from feature vehicles on display throughout the Show. 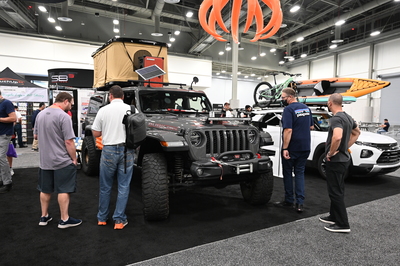 Returning to the SEMA Show for 2022, SEMA Overland Experience casts a spotlight on the fast-growing adventure lifestyle sector that encompasses every backcountry activity from camping and fishing to kayaking and ATV riding.

With many similarities and connections to off-roading, adventure travel, aka overlanding, has strong roots in Australia and South Africa, and in the United States, its popularity has exploded over the past decade. Buyers at the 2022 SEMA Show will be able to see products and vehicles specifically for overlanding in the expanded SEMA Overland Experience area. This special exhibit will include dozens of customized vehicles with fully popped-out tents, survival accessories and portable kitchen systems all displayed among exhibitors supporting the growing overlanding market. 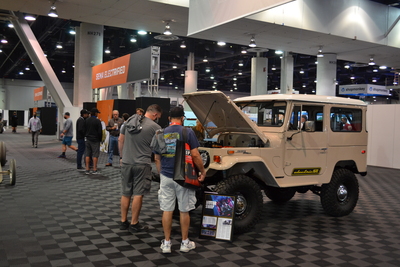 The coming wave of electrified vehicles was the talk of the 2021 SEMA Show, and nowhere was this more apparent than at SEMA Electrified, the SEMA Show’s showcase for the latest EV technologies.

As a trade association, SEMA looks down the road for emerging trends in performance and hot rodding, and it views vehicle electrification as a modern-day expression of those enthusiast pursuits. Now SEMA Electrified offers the industry an opportunity to see where this growing segment might take us in the next five to 10 years and beyond. Experience for yourself the surprising technologies that are advancing and redefining the performance aftermarket. At SEMA Electrified, you’ll encounter some incredible custom electric-vehicle conversions and noteworthy parts and products that are currently driving the market.

Fifteen executive-level innovators compete in a “Shark Tank”-like business competition for automotive entrepreneurs. The Top 5 are then selected for an elimination competition to be held on Wednesday, November 2, at SEMA Central, with the final two candidates presenting their pitches at the SEMA Industry Awards Banquet, Thursday, November 3. The ultimate winner will then receive a prize package of nearly $100,000. Throughout Show Week, each of the 15 competitors will have their new products on display in the Launch Pad Corral and the Featured Products Showcase. Visit the Corral to learn about the products and businesses. 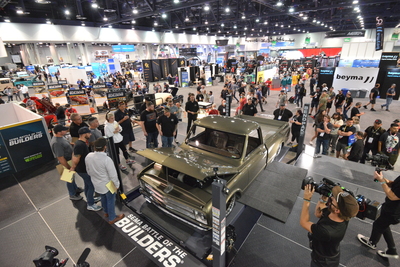 Another must-see feature, SEMA Battle of the Builders showcases some of the world’s most talented vehicle builders in a day-long competition that concludes SEMA Show week.

SEMA Battle of The Builders

Since its debut in 2014, SEMA’s premier showcase of the builder’s art has become one of the Show’s biggest attractions. It returns for 2022 and runs all during Show week before culminating on Friday, November 4, in North Hall. Forty of the world’s most creative builds will be judged by a panel of industry experts, with the Top 12 vehicles advancing to the finals in four distinct categories that are new for 2022: Hot Rod/Hot Rod Truck, 4-Wheel Drive & Off-Road, Sport/Compact, Import Performance, Luxury & Exotic and Young Guns (builders under age 29). The winning vehicles will lead the procession at SEMA Cruise, which takes place immediately after the winners are announced. 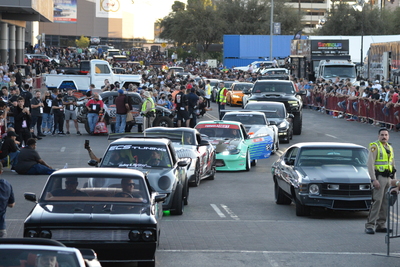 Vehicles from the 2022 SEMA Show begin parading out of the Convention Center at Show close—4:00 p.m. on Friday, November 4—to the delight of thousands of fans in grandstands along the route.

More than 1,000 vehicles will take part in the SEMA Cruise, which proceeds toward the West Hall parking lot and SEMA Ignited, the Show’s official after-party that’s open the public. Spectators have a ringside seat to view the coolest cars on the planet, and the Cruise has become one of the Show’s most anticipated events.

The 2022 SEMA Show culminates at SEMA Ignited, the official after-party that launches immediately after the Show ends on Friday, November 4. The event takes place in the West Hall Parking Lot—just a short walk away—and is free to all credentialed Show attendees.

Introduced in 2014, the annual event is also open to the public, giving consumers the chance to glimpse some of the vehicles and excitement from the world-famous, trade-only SEMA Show. The party is a great way for Showgoers to unwind from the week while enjoying a night of food, entertainment, drifting demonstrations and more. Gates open at 3:00 p.m., and your SEMA Show badge serves as your free ticket. For more information, visit www.SEMAignited.com.

For your shopping convenience, SEMA Gear stores are located throughout the Show in the Bronze Lot, the East Lobby, SEMA Central, the Grand Lobby, the Grand Plaza, the Central Hall, the Skybridge and the West Hall. Don’t forget to stop by and pick up gifts and SEMA Show memorabilia for friends and business associates back home. You’ll find T-shirts, hats, bags and more at each store. A portion of the proceeds from every sale is donated to SEMA Cares charities. 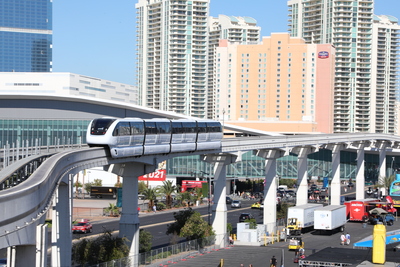 Walking the SEMA Show floor can eat into valuable time, so Showgoers looking to maximize their efficiency during Show Week can take advantage of the new LVCC Loop. A 1.7-mi. subway tunnel that connects West, Central and South Halls at three dedicated stations, the Boring Company-built Loop can save time by transporting attendees from one end of the Convention Center to another in roughly 4 min., and the system can transport more than 4,000 passengers per hour.

While all of the information contained in this article was accurate at the time this issue went to press, be sure to visit www.SEMAShow.com or the SEMA Show app for the latest updates and schedules.

How Was the SEMA Show? We Need Your Feedback