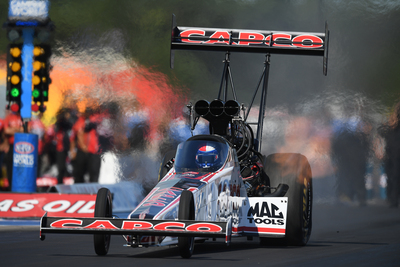 Facing off with eight-time world champ Tony Schumacher in the final round, Torrence picked up his 52nd career victory with a run of 3.866 seconds at 322.04 mph in his 11,000-hp Capco Contractors dragster. He improved to 5-0 against Schumacher in eliminations this year, also picking up his first win in four final round appearances in 2022. Torrence moved up to third in Top Fuel points with the win.

Funny Car’s Tasca won his second straight race and third in the past four events. He was the only driver in both nitro categories to make clean runs on every pass Sunday, finishing it off with a pass of 3.945 at 329.42 in his 11,000-hp Motorcraft/Quick Lane Ford Mustang against defending world champ Ron Capps in the final round. Tasca moved up to fourth in points with one race left in the regular season.

“Regretfully, we have made the decision not to move forward with the remaining dates of the ADRL’s 2022 season. I have taken a new role within our industry that comes with a strict no-compete clause. Trying to manage an organization like ADRL is a big endeavor and rebuilding the brand makes it even tougher. Mel Roth, who ran the day-to-day operations, and I have discussed every option out there. Between his business, the races he already promotes, and other commitments, it would be impossible for him to continue running the sanction on his own. We are truly saddened to have to make this decision. Mel and I both believed in the brand and wanted to be able to rebuild the organization. Finally and most importantly, good luck to all the racers; you guys are really what drag racing is all about.”

Acura Motorsports has revealed its all-new, electrified Acura ARX-06 prototype sports car, which will make its competition debut next January at the Rolex 24 at Daytona.

A new 800V Banshee propulsion system powers the Dodge Charger Daytona SRT Concept, which is designed to “revolutionize the look of a BEV while offering subtle nods to Dodge brand’s muscle car legacy.”

The Charger Daytona SRT Concept also boasts a PowerShot push-to-pass feature. Activated by pushing a button on the steering wheel, PowerShot delivers increased horsepower for a quick burst of acceleration.

For the complete details, visit the announcement here.

Andretti Global, the parent company of Andretti Autosport, has announced plans for a new global motorsports headquarters in Fishers, Indiana. The team intends to build a 575,000-sq.-ft. facility that will occupy approximately 90 acres alongside the Nickel Plate Trail, the Ritchey Woods Nature Preserve and near the Indianapolis Metropolitan Airport. The new global headquarters is expected to add up to 500 jobs to the local community by early 2026.

The $200 million facility is planned to serve as the headquarters of Andretti’s global commercial functions and the base of operations for the team’s current NTT IndyCar Series, Indy Lights, IMSA programs and other future racing initiatives.

In addition to day-to-day operations for the racing team, the building will be home to advanced research and development, and the collaborative campus will feature modern technologies to “create a work-life environment for the benefit of our team, fans and partners.”

Andretti Global will also welcome the Indiana community and race fans worldwide through involvement with the Fishers Parks Nature First program, a planned indoor amphitheater and a museum and innovation center aimed at preserving and showcasing the Andretti legacy and inspiring the future of motorsports.

The team, led by Michael Andretti, operates worldwide in seven racing championships and across eight types of motorsports with 17 full-time drivers.

For the complete details, visit the announcement here.