Dodge has announced that it will end production of the Dodge Charger and Dodge Challenger after 2023.

“We are celebrating the end of an era—and the start of a bright new electrified future—by staying true to our brand,” said Tim Kuniskis, Dodge brand CEO of Stellantis, the global automaker and mobility provider with a portfolio of brands, including Dodge.

As part of this announcement, the Dodge ’23 lineup will pay homage to the musclecar pair with seven special models, the return of a rainbow of heritage colors, an expansion of SRT Jailbreak models, a commemorative “Last Call” underhood plaque for all ’23 Charger and Challenger vehicles and a new, customer-focused vehicle allocation process.

The new ’23 models were teased and displayed under full vehicle covers at M1 Concourse in Pontiac, Michigan, during the first day of the three-day Dodge Speed Week event. Details and specific information on six of the vehicles will be released later this year. The new models will be offered on a first-come, first-served basis at top-selling Dodge dealerships, with a list of dealerships to be shared on dodgegarage.com.

The seventh and final ’23 Dodge model will be the “very last of its kind” and will be revealed at the 2022 SEMA Show in Las Vegas, November 1–4.

The Fédération Internationale de l’Automobile (FIA) has appointed Luke Skipper to the newly created role of director of communications and public affairs. Canadian-born Skipper brings 17 years of experience to the FIA’s growing international team. Tasked with delivering a new communications and public affairs strategy, he will work with the Federation’s leadership to “ensure the FIA is the global voice of mobility and motorsports.” He will also lead a team to drive growth through social media and digital engagement and enhance the FIA’s lobbying capability.

Skipper joins the FIA after seven years with Weber Shandwick, currently the world’s second-largest communications agency. He most recently served as director of public affairs. Before, he worked for the Scottish National Party in the Scottish Parliament, the European Parliament, and as the chief of staff for the party at the House of Commons in London for eight years.

Hennessey, based in Sealy, Texas, has appointed Michael Harley as the new vice president of marketing and communications. He will oversee global marketing and communications at Hennessey Special Vehicles, Hennessey Performance (HPE), and Tuner School. Harley is a noted automotive expert who has held key roles at J.D. Power and Associates, Autoblog, AutoWeb, Autotrader, and Autobytel. He was most recently executive editor at Kelley Blue Book. Before his move to the automotive industry in 2006, Harley held the director of creative resources position at Cameo Guild, where he managed development and marketing for the global gift and collectible manufacturer and importer.

Smith holds content creation experience as the owner of Raven Media and as the former editor of Muscle Mustangs & Fast Fords and Mustang-360.com. He also runs the REVan Evan YouTube channel and @official_ford_guy Instagram page.

Smith has worked intimately with Ford Motor Company, Holley Performance, NHRA and Shelby American, and has won races as a driver in NMRA, NMCA and NHRA. He also served as a factory test driver for Ford Motor Company on special projects, including the Shelby GT350, GT500 and Cobra Jet Mustangs. 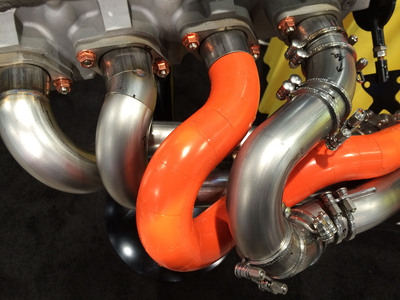 Van Sant Distributing has announced its recent acquisition of Icengineworks—originator of custom exhaust modeling and fabrication systems. Icengineworks products aid in the design and welding of custom headers, turbo manifolds, full exhaust systems as well as turbo downpipes and cold air intakes. Model a custom exhaust inside your car’s engine bay using the Icengineworks modeling blocks, then use the cutting jigs to help transfer your design into metal using mandrel bent U-bends and J-bends. The tack-weld clamps allow fine tuning and adjustment to ensure proper fitment prior to welding. The latest addition to the lineup is the NPSeries for turbo manifolds. It helps builders utilizing stainless pipe elbows in the fabrication of custom turbo applications.

Chris von Lenski, former CRP executive vice president of sales, marketing and product development and 40-year veteran of the company, passed away on July 14. The announcement was made by Dan Schildge, CRP Industries CEO.

During his tenure with CRP, von Lenski was an integral part of the CRP organization and a major contributor to its overall success and growth in the U.S., Canadian and Mexican import automotive aftermarket parts business. He was a consummate “hands-on” individual who always did whatever was needed to take care of CRP’s customers and assure their satisfaction.