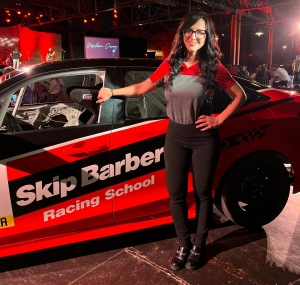 Sports car racer Sally McNulty and Skip Barber Racing have have formed a midseason partnership for the remainder of the 2022 TC America season, beginning with Rounds 9 and 10 of the championship at Road America in Wisconsin, August 19–21. McNulty will pilot the brand-new No. 780 Borla Exhaust Skip Barber 11th Generation Civic Si for the remainder of the 2022 championship. Only two turnkey 11th Generation Civic Si Honda Performance Development (HPD) race chassis was created for 2022 and are the beginning of the next generation of HPD racing.

“I am beyond pumped for the opportunity to race the new generation of Civic Si turnkey race car by Honda, as well as work with a championship-winning team,” said McNulty. “I graduated from Skip Barber School with my competition license, and it just feels right to race under their name as well. Looking forward to growing as a driver and competitor with them for the rest of the 2022 season!”

Facing off with four-time defending world champion Steve Torrence in the final round, Brown powered to a run of 3.902 seconds at 309.49 mph in his 11,000-hp Matco Tools dragster to earn his 69th career victory and first since the third race of the 2021 season, snapping a 30-race winless streak in the process.

Coughlin Jr. didn’t have to wait long for his second career Pro Stock win, making it two victories in a row with a phenomenal weekend in Topeka, including a final-round run of 6.680 at 206.54 in his JEGS.com/Elite Motorsports Chevrolet Camaro to knock off defending world champion Greg Anderson.

Gladstone wrapped up a perfect weekend in Pro Stock Motorcycle, going 6.876 at 195.59 on his J&A Service Suzuki Hayabusa to knock off Eddie Krawiec in the championship round. He denied Krawiec his 50th career win, making his seventh straight run in the 6.80s to finish off a remarkable weekend in style. He also took over the points lead on Saturday and pushed it to a 64-point lead over Angelle Sampey with his stellar showing in eliminations as Pro Stock Motorcycle appeared in Topeka for the first time since 1997.

Officials with the Pikes Peak International Hill Climb (PPIHC) have revealed the 101st Running of the Race to the Clouds will take place on Sunday, June 25, 2023. Drivers, teams and fans will converge on “America’s Mountain” for the 12.42-mile course with 156 turns on the 14,115-ft. summit.

“This race is an event like no other,” said PPIHC Board Chairman Fred Veitch. “Many drivers list the Pikes Peak International Hill Climb at the top of their bucket list and are eager to accept the challenge. Others have competed for more than 20 years and keep coming back. We are really excited to see what the next century of hill climb racing on Pikes Peak will look like as we prepare for the 101st running next summer.”

The current course record is 7 minutes, 57.148 seconds, and was set in 2018 by French racer Romain Dumas in a purpose-built, all-electric ’18 Volkswagen I.D. R.