Luttrell brings substantial business and technology experience from a variety of previous roles, most recently as the senior vice president of information technology at Shiloh Industries, where he focused on enterprise research planning (ERP) consolidation and the company’s move to cloud-based computing. Before Shiloh, Luttrell was the chief information officer and vice president of customer care at the Masco Cabinetry business unit of Masco Corp., and prior to that, he was with Federal-Mogul Corp. for 17 years in various leadership roles.

RealTruck recently announced its name change and rebrand with its “In The Real” campaign to motivate people to get offline and explore the outdoors.

Nitrous Supply Inc. has launched its new website: www.nitrous-supply.com. The company, founded by nitrous-oxide pioneer Mike Thermos, specializes in key components, including nozzles, valves and solenoids, that can enhance the performance of any brand system.

Thermos, who has recently received a Lifetime Achievement “Wally”from NHRA for his contributions to drag racing and named to SEMA’s Motorsports Performance Manufacturer’s Council (MPMC) Hall of Fame, is universally recognized as the “Godfather of Pro Mod” for his efforts in promoting the now-popular class. He has been active in the industry for more than 45 years. 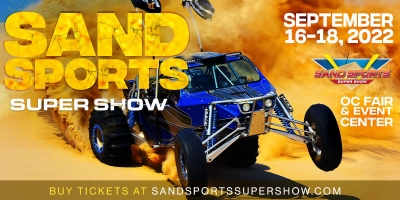 The Sand Sports Super Show, September 16–18,  Costa Mesa, California, will feature more than 300 industry-leading exhibitors, and attendees can get up close to the latest sand rails, UTVs, ATVs, side x sides and toy haulers, and check out the accessories, new apparel and much more.

The sand sports and off-road community come together at the OC Fair & Event Center in Costa Mesa, and enjoy the event’s features, including a performance marketplace, side x side and ATV/UTV demos and entertainment and music at the main stage all weekend. Dozens of prizes will be given out to lucky attendees, including the American Sand Association's (ASA) raffle of a Polaris RZR, and a Genesis Overnighter trailer. More event information is available at www.SandSportsSuperShow.com.

Cooper Standard announced a joint development agreement with Industrie Saleri Italo S.p.A. (Saleri) to create a family of high-performance, coolant-fluid management devices for the electric vehicle market (EV). According to the companies, the new products combine the functionality of pumps with advanced fluid control, routing and connection technologies into single devices, enabling simplified EV architectures and improved performance and range. The devices provide flexibility in vehicle designs and can be integrated easily into existing systems and across vehicle platforms.

S&S Truck Parts LLC (S&S) and Midwest Truck & Auto Parts Inc. (Midwest) announced that the merger of the two companies is complete, creating an alliance between two best-in-class independent Truck Parts Distributors. The combination nearly doubles their collective business and forms a more diversified and scaled platform in the truck aftermarket space with the ability to source and offer a wider selection of high-quality products to customers.

The transaction unites two aftermarket organizations with more than 70 years of service to their communities and shared commitments to quality, service, and value. According to the newly combined company, an increased scale and an expanded geographic footprint will help its customers navigate a complex and challenged global supply chain, increasing available inventory and enabling faster delivery of products. In March of 2022, S&S Truck Parts was purchased by Investcorp, a leading global alternative investment firm.

Mullen Automotive Inc., an emerging electric vehicle (EV) manufacturer, announced the addition of Andre Hudson as its vice president of design. Prior to joining Mullen Automotive, Hudson was the head of product design at IndiEV. During his 25-year career, Hudson has worked for General Motors Co., Hyundai, and Icona Design.

“We are fortunate to have Andre on board. He will play a key role in working with various teams to develop the aesthetics of the Mullen product portfolio,” said David Michery, CEO and chairman of Mullen Automotive.

Ramage has worked for Speedway Motorsports since 2013,  serving first as general counsel & director of governmental affairs and senior vice president of finance & compliance at TMS. Prior, he practiced law in Dallas, focusing on complex litigation, intellectual property and business transactions.

Faber joins Speedway Motorsports after spending the last 17 years with AEG, the sports and live entertainment company. During his tenure, he consulted on sponsorships and premium seating renovations for Daytona International Speedway and Phoenix International Raceway.

Lincoln Electric Holdings—based in Cleveland—has announced that Senior Vice President, President International Peter M. Pletcher will oversee the company’s businesses in the Middle East, Africa and the Asia Pacific regions. This is in addition to his current responsibility for operations in Europe, Turkey and the Commonwealth of Independent States (CIS) region.

Pletcher succeeds Steve Hedlund, who was recently promoted to executive vice president, chief operating officer. Pletcher will lead the International Welding segment’s “Higher Standard 2025 Strategy” initiatives in an effort to accelerate growth and improve margin and return performance. He will report to Steve Hedlund and will continue to serve as a member of Lincoln Electric’s Management Committee. Pletcher joined Lincoln Electric in 1995 and has held leadership positions in sales, applications engineering, marketing, product development and operations.