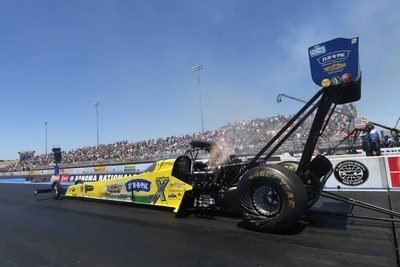 Force went 3.709 seconds at 335.48 mph in her 11,000hp Flav-R-Pac dragster to beat Mike Salinas in the final round, moving back into the points lead over Salinas with her first win at Sonoma and 15th in her career. Salinas now trails Force by six points.

Erica Enders knocked off Greg Anderson on a holeshot in the final round to collect her first career victory at Sonoma Raceway. Enders posted a brilliant .018 reaction time and held off Anderson at the finish line with a run of 6.574 at 196.62 in her Melling Performance/Elite Motorsports Chevrolet Camaro to earn her 39th career win and sixth this season.

After back-to-back final-round appearances, Gladstone broke through for his first career victory in Pro Stock Motorcycle last Sunday, knocking off Eddie Krawiec in the final round with a pass of 6.759 at 200.68 on his J&A Service Suzuki Hayabusa. Krawiec went a quicker 6.758, but Gladstone was quicker on the starting line with a .026 reaction time and held off the veteran to claim his first win in the class.

The NHRA Camping World Drag Racing Series returns to action on July 29–31 with the final race of the Western Swing, the Flav-R-Pac NHRA Northwest Nationals at Pacific Raceways in Seattle. It is the first race at the track since 2019.

Don Schumacher Racing (DSR) and Joe and Cathi Maynard have announced an expanded partnership that sees the Maynards as majority owners of the Top Fuel operation piloted by Tony Schumacher. The new Maynard Family Racing/Don Schumacher Racing team (JCM/DSR) will launch during the NHRA Northwest Nationals (July 29–31 at Pacific Raceways in Kent, Washington), when the Maynards will oversee the day-to-day operations of the Schumacher-driven/Todd Okuhara-tuned machine.

The ORMHOF Class of 2022 will be celebrated at the Off-Road Motorsports Hall of Fame Induction & Awards Gala presented by 4 Wheel Parts on Sunday, October 30, at the South Point Hotel Casino & Spa in Las Vegas. For biographies of the inductees, visit the ORMHOF announcement here. For more information, visit ormhof.org.

The driver of the No. 5 Hendrick Motorsports Chevrolet claimed 10-points-paying Cup Series victories in 2021, including the Championship 4 season finale at Phoenix Raceway to claim the title and a win in the annual All-Star Race.

NASCAR Hall of Famers and fellow Hendrick alumni Jeff Gordon and Jimmie Johnson each own four ESPY awards for the same distinction, with Larson’s victory being the 19th time a NASCAR driver took home the nod. Kyle Busch is the most recent NASCAR driver to win the award, claiming it in 2019. Kevin Harvick (2015) and Martin Truex Jr. (2018) are the only other active NASCAR drivers to have won an ESPY.