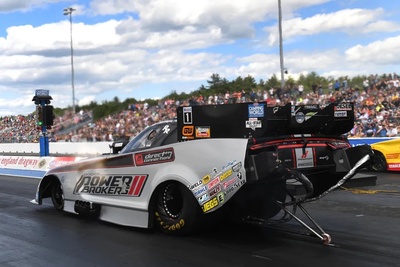 Matt Hagan delivered a run of 3.922 seconds at 327.98 mph in his 11,000-hp Dodge Power Brokers Charger SRT Hellcat for Tony Stewart Racing in the championship round against Robert Hight.

For the first time this year, Funny Car points leader Matt Hagan knocked off Robert Hight in the final round, powering to a third win of the season last Sunday at the NHRA New England Nationals at a sold-out New England Dragway. Mike Salinas (Top Fuel) and Erica Enders (Pro Stock) also picked up wins at the eighth of 22 races during the 2022 NHRA Camping World Drag Racing Series season. For the second straight day, NHRA and New England Dragway officials announced a sellout crowd at the facility.

Hagan delivered a run of 3.922 seconds at 327.98 mph in his 11,000-hp Dodge Power Brokers Charger SRT Hellcat for Tony Stewart Racing in the championship round against Hight, as the two standouts met in the final for the third time in 2022. Hight won the first two, including at the most recent race, but Hagan earned his 42nd career win on Sunday.

In Top Fuel, Salinas drove to his third win in what has been a stellar 2022 campaign, powering past Justin Ashley in the final round with a 3.729 at 330.80 in his 11,000-hp Valley Services/Scrappers Racing dragster. A year after falling in the final round at New England Dragway, Salinas made amends on Sunday, climbing to second in points with his sixth career victory. Brittany Force, who set the track speed record on Sunday with a run of 334.90, maintained the points lead, now 50 points over Salinas.

Enders capped off her weekend with a winning run of 6.547 at 211.00 in the finals in her Melling Performance/Elite Motorsports Chevrolet Camaro. Enders knocked off defending event winner Aaron Stanfield in the final round, claiming her third straight victory and fourth in what’s been a dominant 2022 season. Stanfield stayed second in points, though Enders’ lead grew to 92 points with the victory.