Centerforce Clutches has appointed Chris Thomson as national sales manager. Thomson is a longtime motorsports professional, most recently serving as a national account manager for TMG Performance Products based in Berea, Ohio. Prior, he was director of business development for Baer Brake Systems in Phoenix, senior director of sales for Airaid/K&N Filters and western regional sales manager and sales/marketing manager for Holley Performance Products. Thomson also served on the SEMA Board of Directors from 2006 to 2012. 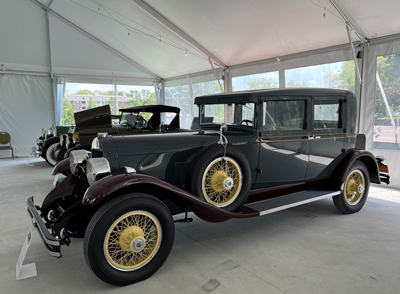 The Antique Automobile Club of America (AACA) has selected a ’29 Du Pont for its 2022 Zenith Award winner. Owned by Lammot J. du Pont of McLean, Virginia, this automobile is one of only 25 Model G Club Sedans ever built and is one of only a handful of Du Pont automobiles known to exist today.

Under its hand-crafted body by the Merrimac Body Company, the limited-production Du Pont was well known for its superb engineering, outstanding performance and distinctive styling. Power is provided by a 322ci Continental inline-eight engine producing 125 hp.

This particular Du Pont started out as a total basket case that was little more than a parts car. After several years of research and meticulous craftsmanship by its talented restorers, it rightfully earned the AACA’s Zenith Award for 2022.

This award recognizes the very best automobile restoration for its overall quality, authenticity and rarity. The 13 automobiles that competed for this year’s Zenith Award, held at the AACA Grand Nationals in Virginia Beach, Virginia, May 20–21, 2022, were selected from each of the AACA National shows in 2021. Only one vehicle can be crowned “Restoration of the Year,” and this stunningly restored ’29 Du Pont clearly deserved that honor.

Chairman and CEO Rick Hendrick has named four longtime senior executives to lead key areas within the organization. Hendrick Motorsports President and COO Marshall Carlson, who since 2005 has led the day-to-day operations of the 14-time NASCAR Cup Series champions, has been promoted to president of Hendrick Companies. He will support all Hendrick-affiliated businesses and initiatives, including Hendrick Motorsports and Hendrick Automotive Group, the privately held network of car dealerships in the United States.

Wayne Robbins, Hendrick Motorsports’ CFO since 2019, will re-assume his role as executive vice president and CFO of Hendrick Companies. He will oversee strategic financial planning, management of investments and oversight of the not-for-profit Hendrick Family Foundation.

Longtime executive Scott Lampe, who came to Hendrick Motorsports in 1999 and served as its CFO from 2005 until 2019, has returned to the team in the same role following more than two years working in private equity. He will guide accounting, human resources, information technology, facilities, operational excellence and aviation, and will report to Andrews.

Ultimate Headers has announced that it has appointed Jim Browning Jr. as its president. Browning has worked for Ultimate Headers for five years, and under his leadership, the company recently moved operations to a new 12,000-sq.-ft. facility in Berea, Ohio. Before joining Ultimate Headers, Browning worked in the oil and gas industry for six years. He spent 18 years in several positions at CORSA Performance Exhaust, where he worked on new-product development and customer relations for OE boat manufacturers in CORSA’s marine business and with OE automotive manufacturers.