B. Force, Hight and M. Smith Cap Off Virginia NHRA Nationals With Victories 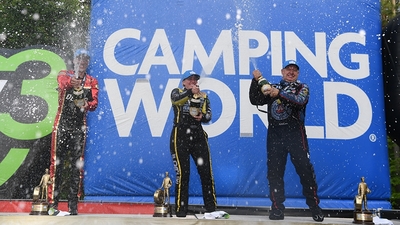 Brittany Force finished off a dominant weekend that included track records and a No. 1 qualifier with a Top Fuel victory on Sunday at Virginia Motorsports Park, helping John Force Racing to a Top Fuel and Funny Car sweep at the Virginia NHRA Nationals. Robert Hight (Funny Car) and Matt Smith (Pro Stock Motorcycle) also won at the seventh of 22 races during the 2022 NHRA Camping World Drag Racing Series season.

Force never trailed in the final round against four-time defending world champion Steve Torrence, going 3.770 seconds at 334.07 mph in her 11,000hp Flav-R-Pac dragster to win for the third time this season, extending her points lead to 81 over rival Torrence, who moved into second in points.

Hight helped ensure a nitro sweep for JFR, delivering a 3.907 at 328.86 in his 11,000hp Auto Club Chevrolet Camaro SS in the Funny Car final round against points leader Matt Hagan, whose points lead now stands at just 15 over Hight. 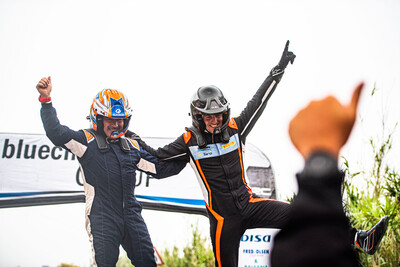 Nil Solans enjoyed a trouble-free drive over the closing tests and went on to clinch victory number two of the season by 11.2 seconds.

Nil Solans grabbed a second victory from as many FIA European Rally Championship (ERC) starts this season, after Luis Monzón hit trouble at Rally Islas Canarias. Monzón was looking good for his fourth Rally Islas Canarias triumph as he outpaced Solans by 3.0 seconds on Saturday’s opener, but disaster struck on the very next test. The 56-year-old discovered a screw which had found its way into one of his Škoda Fabia Rally2’s tires. There was no time to change the wheel before the stage and the tire eventually gave way after 4.3 km, plunging Monzón into retirement.

Solans then seized the top spot and led by 10.4 seconds from Citroën C3 Rally2 driver Yoann Bonato heading into the final loop. He enjoyed a trouble-free drive over the closing tests and went on to clinch victory number two of the season by 11.2 seconds. Bonato was left scrapping for the runners-up spot with Team MRF Tyres Škoda driver Efrén Llarena. Llarena reduced Bonato’s deficit to just 0.7 seconds ahead of the Power Stage before outpacing his rival on the finale to end the rally on identical times. Llarena took second on countback having set the fastest time over the first non-superspecial stage, moving into the championship lead in the process.

Enrique Cruz was the highest-placed Canary Islander, and brought his Ford Fiesta Rally2 home 12.7 seconds behind Bonato to take fourth. He had 45.3 seconds in hand over Škoda rookie Pep Bassas, who celebrated his best-ever ERC result.

The series reverts to gravel for Rally Poland next month. The fourth round is based at Mikołajki, June 10–12.

NASCAR has announced the inductees who will comprise the NASCAR Hall of Fame Class of 2023. The three-person group—the 13th since the inception of the NASCAR Hall of Fame in 2010—consists of two Modern-Era inductees, Matt Kenseth and Kirk Shelmerdine, and one Pioneer inductee, Hershel McGriff. In addition, Mike Helton was named the recipient of the Landmark Award for Outstanding Contributions to NASCAR.

For the first time since 2019, members of the NASCAR Hall of Fame Voting Panel—comprised of NASCAR representatives, Hall of Fame inductees, track owners, media members and more—met in an in-person closed session at the Charlotte Convention Center to debate and vote upon the 15 nominees for the induction class of 2023 and the five nominees for the Landmark Award. Results for the NASCAR.com Fan Vote were A.J. Foyt (Pioneer), Kenseth (Modern Era) and Harry Gant (Modern Era).