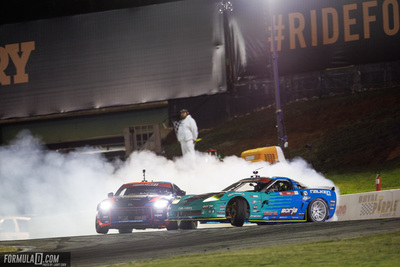 Aasbo qualified third on Friday to line up in a challenging corner of the Formula DRIFT elimination bracket. After overcoming Brazilian driver Joao Barion in the opening round, he faced down veteran Justin “JTP” Pawlak and then met teammate Tuerck in the quarterfinal round.

In the final four, Aasbo faced down championship favorite Aurimas “Odi” Bakchis and then went on to a highlight battle against three-time champion Chris Forsberg. With five championship titles between them, drivers Forsberg and Aasbo have a long history of close competition and a similar tactical style. Judges declared their first head-to-head match too close to call, with Forsberg putting in a tidy performance that didn’t deliver the proximity of Aasbo’s run.

But Aasbo delivered a clear victory in the rematch to take the event win. As the pressure mounted, Aasbo repeated his aggressive drive while Forsberg made a big error, putting all four wheels off track.