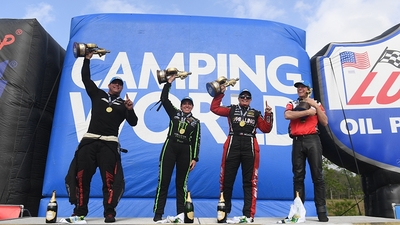 Erica Enders knocked off rookie and No. 1 qualifier Camrie Caruso in the championship round, getting her third win this season and 36th in her career with a pass of 6.568 seconds at 210.24 mph in her Melling Performance/Elite Motorsports Chevrolet Camaro.

In the first all-female final round in NHRA Pro Stock history, Houston native Erica Enders closed out Houston Raceway Park in style, picking up the win in front of a sold-out crowd at her home track on Sunday at the 35th and final NHRA SpringNationals. Brittany Force (Top Fuel), Matt Hagan (Funny Car) and Steve Johnson (Pro Stock Motorcycle) also won the fifth of 22 races during the 2022 season as the NHRA Camping World Drag Racing Series enjoyed consecutive days of sellout crowds to close out racing at Houston Raceway Park.

Enders, a four-time Pro Stock world champion, knocked off rookie and No. 1 qualifier Camrie Caruso in the championship round, getting her third win this season and 36th in her career with a pass of 6.568 seconds at 210.24 mph in her Melling Performance/Elite Motorsports Chevrolet Camaro.

In Top Fuel, Brittany Force rolled to a second straight victory with a blast of 3.767 at 321.42 in her 11,000-hp Monster Energy dragster. In what was the final NHRA Camping World Drag Racing Series pass at Houston, Force beat Justin Ashley on a holeshot, posting a .041 reaction to hold off Ashley’s run of 3.763.

At the site of his first career Funny Car victory, Hagan closed out Houston Raceway Park with the last win at the facility in the class, denying Bobby Bode the chance for his first win with a winning run of 3.982 at 326.63 in his 11,000-hp Dodge Power Brokers Charger SRT Hellcat Funny Car.

Johnson picked up his first Pro Stock Motorcycle win of the season, going 6.720 at 199.91 on his Slick 50 Suzuki to beat longtime rival and defending world champ Matt Smith in the finals. Johnson made the quickest run in Houston history in the opening round and then setting both ends of the track record a round later with a pass of 6.711 at 201.55. 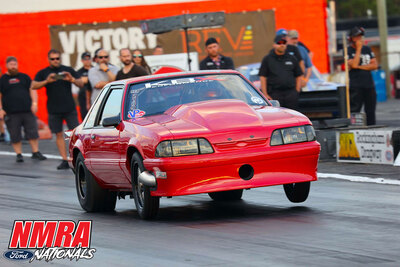 Joel Greathouse’s turbocharged ’93 Ford Mustang managed by KBX Performance with Bennett Racing Engines power under the hood proved to be unbeatable as its 4.619 at 155.90 mph trip put Becki Cram’s Mustang on the trailer.

NMRA VP Racing Madditives Renegade/NMCA Edelbrock Xtreme Street: Joel Greathouse worked his way into the final round of eliminations where he took on Becki Cram. Greathouse’s entry, a turbocharged ’93 Ford Mustang managed by KBX Performance with Bennett Racing Engines power under the hood, proved to be unbeatable as its 4.619 at 155.90 mph trip put Cram’s Mustang on the trailer.

JDM Engineering Limited Street: Vector Motorsports’ Samantha Moore in her ProCharged ’14 Mustang California Special met Del Holbrook in the finals, where Moore won 8.182 at 168.41 mph pass as Holbrook spun at the hit and tried to recover but wasn’t able to do so in time.

SunCoast Performance 8.60 Street Race: William Lujan in his Vortech supercharged ’90 Mustang faced Terry “Beefcake” Reeves in his twin turbocharged and Gen 3 Coyote-equipped ’18 Mustang in the finals. Both men left the line strong but troubles plagued Reeves’s S550 in the left lane and he struggled to run the number while Lujan’s Fox body motored through the traps to pick up the win and the Victor award for the weekend.

Richmond Gear Factory Stock: Mike Bowen in his Gen 1 Coyote-powered ’71 Ford Maverick met Chris Niebauer in his ’85 Ford Mustang in the finals, where Niebauer rolled through the beams at the start and turned on the red light, but the win was gifted to Bowen who made it official with a 10.123 at 132.66 mph pass.

Exedy Racing Clutch Modular Muscle: Shane Williams staged his ’99 Ford Mustang and Dean Snow did the same with his ’04 model, but Snow tripped the red light at the start and made Williams, who continued on to run 11.705 at 111.35 mph on his 11.70 dial in, the undeniable winner.

HP Tuners Super Stang: Chris Rusch staged his ’18 Ford Mustang up against the young gun Logan Day and his ’21 Mustang. Day dialed in quicker at 11.03 to Rusch’s 11.90, but Day left the line a touch too early and Rusch was able to run to the stripe with the win light already illuminated in his lane.

Detroit Locker Truck & Lightning: Johnny “Lightning” Wiker improved his number-five qualifying position to a first-place finish overall with an 8.520 at 163.06 mph pass from his ’99 Ford Lightning while Bob Dill did the same as he moved from sixth in qualifying to the runner up with an 8.769 at 155.06 mph on his 8.69 dial-in his ’01 Lightning during the finals. 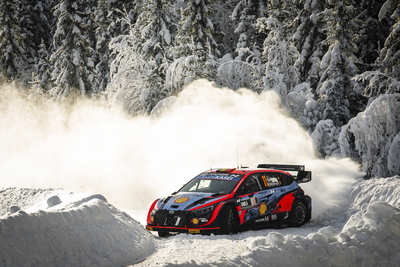 Kalle Rovanperä snatched a Croatia Rally victory last Sunday afternoon. The Finn led from the start of the three-day rally in the hills around Zagreb in his Toyota GR Yaris, only for a storm in the penultimate speed test to wipe out his advantage.

A resurgent Ott Tänak, whose gamble on softer Pirelli tires gave his Hyundai i20 N a performance edge on the streaming asphalt, grabbed a 1.4-second lead. The pendulum swung back towards Rovanperä as drier roads in the closing Wolf Power Stage offered hope, but the odds remained firmly in Tänak's favor as mud and dirt littered the final 14.09 km.

Rovanperä overturned the deficit to claim back-to-back FIA World Rally Championship wins by 4.3 seconds. Victory extended his points lead to 29 after three rounds of the 13-event season. Tänak finished 2 minutes, 16.7 seconds clear of teammate Thierry Neuville. The Belgian overhauled Craig Breen on the final morning to claim a podium. Breen survived an overshoot and a spin to take fourth in a Ford Puma.

The series switches to gravel for the first time in 2022 at Vodafone Rally de Portugal. The fourth round is based at Matosinhos, May 19–22.