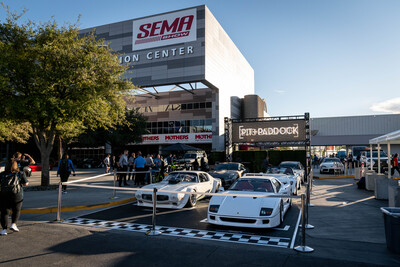 In its first year, Pit+Paddock has ventured beyond traditional media and brought together and inspired enthusiasts and industry partners through its Cars+Coffee and Drivers Project series and activations at the 2021 SEMA Show.

Pit+Paddock celebrated its first anniversary in the month of April. Initially established in 2015 as Front Street Media, the online magazine was relaunched seven years later as Pit+Paddock, a redefined media outlet and lifestyle brand focused on performance car culture. Its goal was to venture beyond traditional media and bring together and inspire enthusiasts and industry partners through engaging experiences. In its first year, the brand has accomplished just that through its Cars+Coffee and Drivers Project series and activations at the 2021 SEMA Show.

As Pit+Paddock turns one year old, it continues to evolve, announcing that it will expand its operations as a full-service agency with athlete management, video production and event coordination. Athlete management is a new endeavor for Pit+Paddock, and the brand will announcethe signing of its first client in the coming weeks.

Video production is also a new service at Pit+Paddock. Clients will be able to select from a wide range of video offerings, from promotional and product-focused to lifestyle and feature films. Event coordination continues to be a growing sector for Pit+Paddock. The next chapter in the brand’s event strategy includes exciting new industry collaborations and pop-ups slated to take place in car culture-heavy regions across the United States, including Texas and the Pacific Northwest.

PFC Brakes, the women-owned brakes manufacturer based in Clover, South Carolina, has announced the promotion of Luis Maurel to the role of director of global motorsports. Maurel will manage the company’s race department and help expand into sports cars and other professional motorsports segments across the world, the company stated. He will also manage PFC Brakes’ involvement as providers for series, including the NTT IndyCar Series, Superstar Racing Experience (SRX), and Renault Sport Series. Maurel began with PFC Brakes as motorsport sales manager for Europe and Asia in 2019. Prior, he worked with PJH Brands (PJ1 and VHT) and Galfer Auto. He was also an avid motorbike racer, capturing several titles throughout Europe.

Autograph, the Web3 brand co-founded by Tom Brady, has announced a deal with Penske Entertainment and Team Penske to leverage three globally relevant racing brands: the NTT IndyCar Series; the Indianapolis Motor Speedway (IMS); and Team Penske, with more than 600 race wins, including 18 Indy 500 victories and three Daytona 500 wins. The multi-year partnership will see an NFT collection drop in conjunction with the 106th Running of the Indianapolis 500 presented by Gainbridge on Sunday, May 29, on NBC. For more information, visit indycar.com and autograph.io.

A committee of champion women autocrossers selected the winners from a host of submissions. The annual scholarship is supported by Mazda Motorsports and the SCCA Foundation. For more information, visit scca.com.