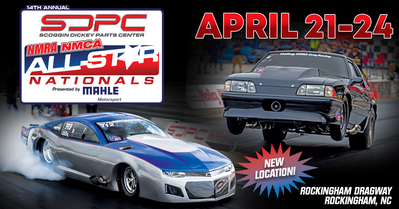 MAHLE Motorsport has announced it will be this year’s presenting event sponsor for the Scoggin Dickey Parts Center NMRA/NMCA All-Star Nationals. The All-Star Nationals is being held April 21–24, in a new location at the Rockingham Dragway in North Carolina. This four-day event, the second for the year, is one of only two events where both NMRA and NMCA racers come together to compete for titles in multiple categories—Pro Mod, X275, Xtreme Street/Renegade Radial Classes and Index racing. The event is billed as the ultimate street car bash in the southeast, where the fastest musclecar drag racers and quickest NMRA Ford racers prove their mettle with record setting performances on the same track.

In addition to the weekend-long race events, there is show and shine for domestics and Manufacturer’s Midway where enthusiasts and builders can meet face to face with automotive experts, including MAHLE Motorsport, which will have a booth at the event. For a full list of details go to www.nmcadigital.com. For more information about the Scoggin Dickey Parts Center NMRA/NMCA All-Star Nationals Presented by MAHLE Motorsport or to purchase tickets, click here.

Crandon International Raceway management has announced that the historic facility in Crandon, Wisconsin, and all its assets have been purchased by Cliff Flannery, the longtime track president. Since opening in 1984, the 400-plus acre track located in the Northwoods of Wisconsin has hosted some of the largest off-road races in the sport, including June’s Forest County Potawatomi Brush Run and Labor Day’s massive Polaris World Championship Off-Road Races. The most recent Polaris World Championship drew a record crowd of nearly 65,000 people at its 52nd anniversary running. The venue also serves as home to the annual Red Bull Crandon World Cup, held each Sunday of Labor Day weekend, and is scheduled to feature the AMSOIL Champ Off-Road and Ultra4 Racing series in 2022. Crandon Office Manager Tina Kulaf will remain in her role of managing the track’s business operation. Additionally, Promoter Marty Fiolka and his California-based TRG Rennsport group will continue their roles in event promotion and execution, sponsorship, marketing, content, and public relations. For more information, visit crandonoffroad.com.

The 35th Motorsports Hall of Fame of America Induction Celebration presented by Toyota Racing will be held in Daytona Beach, Florida, March 6–7, 2023.