Nitro Rallycross (Nitro RX) will launch its inaugural global season on June 18–19 at England’s Lydden Hill Race Circuit for the first of ten races staged in six countries, including Sweden, Finland, Canada, Saudi Arabia and the United States. The 2022–23 Nitro RX season will also feature competition with the debut of the FC1-X in the new Group E division. Created by First Corner, LLC, in collaboration with QEV Technologies and Nitro RX, the FC1-X delivers the electric equivalent of 1,070 peak hp and accelerates from 0–60 in 1.4 seconds. In addition, the Supercar class and NRX Next class return for this season.

Formula 1 has announced that Las Vegas will provide the backdrop to Formula 1’s newest race when the American city hosts a night event beginning in 2023. The Las Vegas Grand Prix will take place on a Saturday next November and be one of three races in the United States, joining Miami and Austin. Las Vegas hosted races in 1981 and 1982, but this will be the first time F1 cars will race on the Las Vegas Strip. The 14-turn track will run for 3.8 miles with top speeds expected to hit around 212 mph. The design features three straights, a high-speed cornering sequence and a single chicane section, with the Grand Prix to be run over 50 laps. For more information, visit formula1.com.

The Wild Horse Pass Motorsports Park in Chandler, Arizona, has announced that the 2023 NHRA race will serve as the final event for the facility. The park will celebrate its 40th year of NHRA racing during next year’s Arizona Nationals. The park features four race tracks, including a 1/4-mile, NHRA-sanctioned dragstrip; a 1.6-mile road course; a 10-turn, 1.25-mile road course; and a 1.1-mile road course with a 0.375-mile straightaway. It also features a 2.4-mile IHBA- and APBA-sanctioned oval lake. A new overpass roadway for an I-10 extension will utilize the space now occupied by the track. For more information, visit racewildhorse.com. 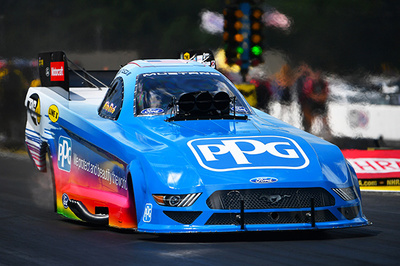 PPG has announced its renewed sponsorship of the Tasca Racing team for the 2022 NHRA season. Bob Tasca III, Tasca Racing team president and driver, will compete in 22 events across the U.S. in this year’s NHRA Nitro Funny Car division. The team’s Ford Shelby Mustang Nitro Funny Car will display PPG’s colorful livery in the races at the New England Dragway in Epping, New Hampshire and the Maple Grove Raceway in Mohnton, Pennsylvania.