In the final round featuring the last eight Top Fuel world champions, it was Brittany Force who powered to the win, claiming a victory on Sunday at the NHRA Four-Wide Nationals at The Strip at Las Vegas Motor Speedway. Ron Capps (Funny Car) and Erica Enders (Pro Stock) also won at the fourth of 22 races during the 2022 NHRA Camping World Drag Racing Series season.

In a championship quad that also included four-time defending world champ Steve Torrence, Tony Schumacher and Antron Brown, Force went 3.718 seconds at 338.00 mph in her 11,000-hp Monster Energy dragster to pick up her first win this season and 12th in her career. Torrence finished as the runner-up, taking over the points lead in the process.

It was a monumental day for Capps in Funny Car, as the defending world champ claimed his first victory since becoming a team owner this year with a stellar run of 3.914 at 331.20 in his 11,000-hp NAPA Auto Parts Funny Car. Matt Hagan advanced to his second straight final round and also took over the points lead from Robert Hight with his 74th final round appearance. He won his opening-round quad and finished second to Capps a round later to advance to the final.

Enders secured her second win this season in Pro Stock and 35th in her career, outlasting a trio of young standouts with a strong run of 6.668 at 206.32 in her Melling Performance/Elite Motorsports Chevrolet Camaro in the final round. 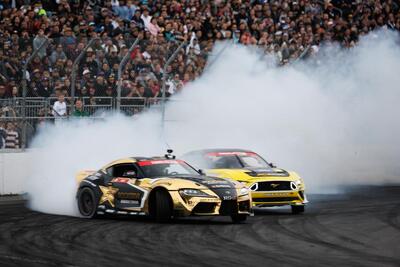 Just two days after the official unveiling of the Toyota GR Corolla, Ryan Tuerck scored its first-ever win. He topped the podium in the Rain-X/Nitto Tire Toyota GR Corolla at the 2022 season opening Formula DRIFT Long Beach round. Teammate Fredric Aasbo made a good start on defending his 2021 championship title and heads into Round 2 tied for third in the points in his Rockstar Energy Drink Toyota GR Supra. Tuerck achieved a rare perfect weekend in the Rain-X/Nitto Tire Toyota GR Corolla, taking the No. 1 qualifying spot on Friday before running the competition ladder all the way to the top on Saturday.

After advancing past Jeff Jones in the Round of 32, he then faced down promising young driver Branden Sorensen, before battling past longtime friend and rival Chris Forsberg. He next advanced past Aurimas “Odi” Bakchis in the Final 4, setting the stage for a final battle against either veteran Matt Field or teammate Aasbo. But an unusual turn of events meant that match never materialized. Aasbo made contact with Field, who spun into the wall. Judges deemed Aasbo at fault and awarded Tuerck the event victory when Field was unable to bring his car to the line.

For 2022, Formula DRIFT returns with a schedule of eight event weekends at a mix of new and returning venues across the country. Next on the calendar is the Road Atlanta stop, May 6–7.

Showcase Your Products or Volunteer for SEMA's All-Female Vehicle Build