King of the Hammers (KOH) co-founder Dave Cole has sold the Ultra4 Regional Series to Jason and Gayla Robinett, owners of MidAmerica Outdoors—a riding and racing park in Jay, Oklahoma. Cole will retain ownership of Hammerking Productions, which includes King of the Hammers, Ultra4 Europe and Great American Shortcourse.

“This is a transitional process as we separate assets and they take ownership of the Ultra4 brand and the Ultra4 Racing TV channel on Vimeo,” Cole stated in an open letter. “I am excited to see what the Robinett’s and their team can bring to the series. They have incredible plans for the future and have already built a world-class facility in Oklahoma.”

“KOH will always be the first race of the Ultra4 Series and KOH Racers will continue to qualify at Ultra4 Races. I am restructuring Hammerking Productions around King of the Hammers and a new project, UltraTours, that allows me to spend a lot more time wheeling,” Cole said.

The International Council of Motorsport Sciences (ICMS), which hosts its Annual Congress at the PRI Trade Show in Indianapolis each December, will host its Race Track Safety Program (RTSP) at Lucas Oil Indianapolis Raceway Park in Brownsburg, Indiana, from March 31–April 2. Sessions for the event, which is supported by PRI, include certified medical and fire rescue, drag-racing track prep, and EV emergencies, plus an online didactic session and test. In addition to PRI, the event is also supported by AMR, ESI Equipment and Hazard Control Technologies. To purchase tickets, visit the event page. For more information, visit icmsmotorsportsafety.org.

“NMRA and NMCA are proud to have SCE Gaskets as the Official Gasket of both series,” said Steve Wolcott, co-founder and CEO of ProMedia Events & Publishing—the parent company of the NMRA Ford Nationals and NMCA Muscle Car Nationals. “Many of our series’ leading engine builders rely on SCE Gaskets for their extreme high performance and reliability, especially in high boost applications. SCE Gaskets is committed to working with our championship NMRA and NMCA racers and will have a big on-site presence during our 2022 events." 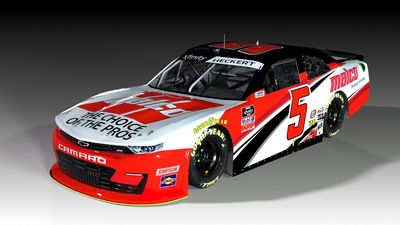 Malco Automotive Named Primary Sponsor for Scott Heckert and BJMM’s No. 5 for the Pit Boss 250 at Circuit of the Americas

Malco Products Inc. and B.J. McLeod Motorsports (BJMM) have announced that Connecticut driver Scott Heckert will be behind the wheel of the stock car No. 5 Chevrolet this Saturday, March 26, for the NASCAR Xfinity series race, Pit Boss 250, at Circuit of the Americas in Austin, Texas. Heckert’s primary sponsor for the race is Malco Automotive Products—the official detailing sponsor of B.J. McLeod Motorsports.

NASCAR and Hendrick Motorsports have announced their intention to compete in the 24 Hours of Le Mans as the special Garage 56 entry in 2023. The entry will be a modified version of the Next Gen Chevrolet Camaro ZL1 race car and is a collaboration of NASCAR, Hendrick Motorsports, Chevrolet, IMSA and Goodyear. Further details, including technical elements of the car and the team’s driver lineup, will be announced at a later date. For more information, visit nascar.com or hendrickmotorsports.com.

Team Carrell, Huff & Barger took the Faster Than Cancer electric dragster to Orlando Speed World Dragway with the intent to increase the electric speed record and become the fastest electric vehicle in the quarter-mile—a feat completed shortly at 4:00 p.m. on Tuesday, March 15 (EDT).

Huff designed and built the electric dragster starting in 2017 as part of the “Quest for 200 mph”. Shortly after accomplishing this goal of being the first to 200 mph in an electric drag car in the ¼-mile, Huff was diagnosed with stage 4 metastatic upper tract urothelial cancer that had spread to his spine with a tumor bundle in his L3. Through cancer treatment and subsequent immunotherapy at Seattle Cancer Care Alliance, Fred Hutch Cancer Research and UW Medical Center, Huff continues to pursue his passion for racing with his Pro-Lite hydroplane, electric dragster and motorcycle racing teams. After appearing with Garlits on Fox Sports NHRA Gatornationals as a Pep Boys exhibition, Team Carrell, Huff & Barger took the Faster Than Cancer electric dragster to Orlando Speed World Dragway with the intent to increase the electric speed record and become the fastest electric vehicle in the quarter-mile—a feat completed shortly at 4:00 p.m. on Tuesday, March 15 (EDT).