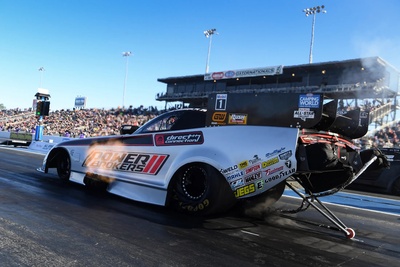 Matt Hagan powered his 11,000-hp Dodge Power Brokers Dodge Charger Hellcat SRT to a run of 3.910 seconds at 330.96 mph to beat Blake Alexander in the final round.

In his second final this season, Hagan powered his 11,000-hp Dodge Power Brokers Dodge Charger Hellcat SRT to a run of 3.910 seconds at 330.96 mph to beat Blake Alexander in the final round.

A day after picking up his first career No. 1 qualifier, Tatum did one better, driving to his first career Top Fuel victory with a standout run of 3.700 at 330.31 in his 11,000-hp Tripp Tatum Racing dragster.

In Pro Stock, Glenn, the reigning NHRA Rookie of the Year, got the best of his KB Racing teammate in the final round, going 6.486 at 210.21 in his RAD Torque Systems Chevrolet Camaro to knock off Kyle Koretsky.

Stoffer went 6.700 at 200.77 on her Big St. Charles/Ray Skillman Suzuki to beat Angie Smith in the final round of Pro Stock Motorcycle. To reach the final round for the fourth straight race, dating back to last season, Stoffer made the two quickest runs in Pro Stock Motorcycle history, going 6.682 at 198.70 in the opening round to initially set the record before she topped it with an 6.665 at 200.71 a round later. Stoffer added a 6.721 at 200.08 to reach the final round, with her finals performance giving Stoffer the third-quickest run in class history.

NASCAR has announced two key executive leadership moves, promoting Steve O’Donnell to COO and returning Ben Kennedy to the competition team where he will assume a key leadership position as senior vice president, racing development & strategy. As COO, O’Donnell will continue to provide oversight of all NASCAR competition and racing operations, while adding track operations and strategic development to his purview. With these added duties, all NASCAR-owned track properties, track presidents and respective events fall under O’Donnell’s responsibilities.

In returning to NASCAR’s competition team, Kennedy will maintain oversight of the national series schedule development, while assuming immediate oversight of racing operations, track services/transportation/officiating, industry relations and the NASCAR Touring and Weekly Series. He will work with O’Donnell in managing the areas of at-track competition and racing innovation. For more information, visit nascar.com.

Officials have announced changes to the DIRTcar Summer Nationals “Hell Tour” schedule, including four new race dates. The 32-race stretch will take place from mid-June to late July for the DIRTcar Summer Nationals Late Models and DIRTcar Summit Racing Equipment Modified Nationals. New races include Red Hill Raceway (Sumner, Illinois) on Tuesday, June 28. Midwest racing promoter Jeremy Sneed has purchased the 3/8-mile oval and will reopen the facility for racing for the first time since it was closed in 2005.