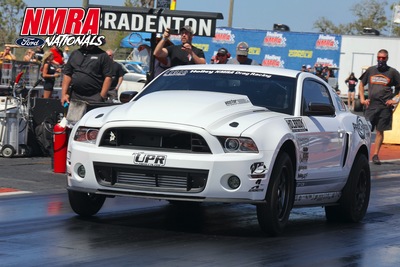 NMRA VP Racing Madditives Renegade: Kieffer Simpson in his ’13 Mustang and Joel Greathouse in his KBX Performance-backed and Harts turbocharged Fox Mustang met in the final, where Greathouse carried the lead from start to stripe and his 4.554 at 155.81 mph shot scored a home run win while Simpson cruised to the runner-up finish.

JDM Engineering Limited Street: Samantha Moore met Stacey Roby, in the all-ProCharger finals before Moore went on to nearly duplicate her qualifying time with an 8.151 at 169.08 mph trip. Roby, however, left the line four-thousandths of a second too soon and gifted the win to Moore.

SunCoast Performance 8.60 Street Race: Jeff Bloem took home the Victor award in his ’91 Ford Mustang with an 8.626 at 161.88 mph pass and would have been the runner-up as he had a foul start if not for what went down in the opposing lane. Randy Thomas ran too quick for his ’10 Mustang GT500’s roll cage certification and class rules with an 8.483 at 160.59 mph, and his potential win was disqualified and downgraded to a runner-up finish instead, so Bloem was reinstated as the winner.

G-Force Racing Transmissions Coyote Stock: Charlie Booze Jr. in Scott Milhimes’s ’90 Ford Mustang met Randy Soper in the finals, who qualified second in his ’04 Mustang Mach 1. Although Booze had a hundredth of a second head start on the tree and a strong 9.764 at 134.04 mph, Soper delivered a knock-out blow with a 9.737 at 137.12 mph.

Richmond Gear Factory Stock: Mike Bowen ran his Gen 1 Coyote-powered ’71 Ford Maverick to the final round where he faced off against Chris Niebauer in his ’85 Mustang GT, but Bowen drove around him to reclaim the lead and lit the scoreboards with a winning 10.110 at 132.50 mph trip.

Exedy Racing Clutch Modular Muscle: Susan McClenaghan in her ’10 Mustang met Matt Harget who red-lighted in the final round. Her perfect weekend was capped off with a 9.401 at 145.39 mph jaunt on her 9.39 dial-in and another win.

ARP Open Comp: William Jones and Mel White met in the final round, where White left the line just 0.002 seconds too soon and defaulted the win light to Jones’ lane as he cruised through the traps with his ’68 Falcon to punctuate the win with a 9.348 at 144.40 mph run on his 9.31-second dial-in.

Detroit Locker Truck & Lightning: Bob Dill in his ’01 Ford F-150 met Johnny Lightning in the finals. Both ran over their mid-eight-second dial-ins, but Dill had the winning package, with a 8.916 at 140.53 mph pass.

BBK Performance Spring Break Shootout: Mike Jovanis repeated the feat with another commanding performance in eliminations as his 7-second ’89 Ford Mustang proved unbeatable. Turbocharged power propelled Jovanis through the traps in the final to close out his time in Florida with a 7.665 at 177.11 mph time slip while Randy Thomas collected the runner-up prize with an 8.469 at 160.56 mph blast.

The action will continue as the NMRA heads to Rockingham, North Carolina, for the 14th Annual Scoggin-Dickey Parts Center NMRA/NMCA All-Star Nationals presented by MAHLE Motorsport on April 22–24 at Rockingham Dragway. 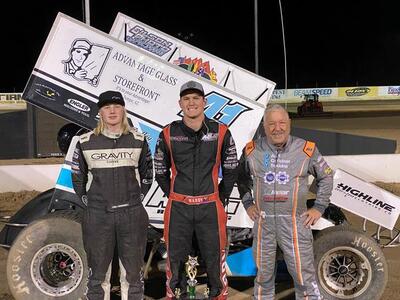 Colton Hardy dominated the final 17 laps at Cocopah Speedway last Friday night to open the 2022 season for the Arizona based tour.

Ford has announced two new businesses: Ford Blue for internal-combustion engine (ICE) vehicles and Ford Model e for electric vehicles. Ford Blue will build out the company’s portfolio of ICE vehicles with a goal to lower costs, simplify operations and improve quality along with providing “world-class hardware engineering and manufacturing capabilities.” Ford Model e, meantime, is designed to accelerate innovation and delivery of breakthrough electric vehicles at scale and develop software and connected vehicle technologies and services. Ford Blue and Ford Model e will operate as distinct businesses, but share relevant technology and best practices. Along with Ford Pro—the vehicle service and distribution business for commercial customers—all three businesses are expected to have discrete P&Ls by 2023.

In Ford motorsports news, as a tribute to Alan Mann Racing’s ’66 Ford GT lightweight experimental prototypes, Ford has introduced the Ford GT Alan Mann Heritage Edition, pictured above. The limited-edition vehicle celebrates the role the prototypes played in the history of the development of the Ford GT. The ’22 Ford GT Alan Mann Heritage Edition is available for approved Ford GT customers, with first deliveries taking place this quarter. Click here for more information.

IndyCar has moved the debut of hybrid power to the 2024 season due to global supply-chain challenges. As a result, the NTT IndyCar Series will continue with its current 2.2L, twin-turbocharged V6 powerplant for the 2023 season. Teams will utilize the 2.4L, twin-turbocharged V6 engine with hybrid technology the following season. For more information, visit indycar.com.

PNC Bank and Chip Ganassi Racing (CGR) have announced the launch of Women In Motorsports Powered by PNC Bank with Chip Ganassi Racing, a new campaign to drive awareness and support for gender equality and economic inclusion for women in the workforce. Announced on International Women’s Day, March 8, the initiative includes a video content series showcasing female industry leaders and an internship designed to accelerate career pathways in motorsports for women. The campaign will highlight women in the CGR organization who have excelled in motorsports, including IMSA engineer Danielle Shepherd, IndyCar engineer Angela Ashmore and IndyCar mechanic Anna Chatten.

Additionally, the inaugural Women In Motorsports internship program will engage a select group of female college students in on-site learning and career-development experiences during the 2022 NTT IndyCar Series season. The internship is open to eligible women attending a university, college, or other higher education institution in the US and includes a paid stipend and academic credit where applicable. The application portal closes March 22, at 5:00 p.m. (EDT). For more information or to apply, visit wim.chipganassiracing.com.