PRI Founding Members and Legacy Exhibitors were invited to attend the DIRTcar Nationals at Volusia Speedway Park near Barberville, Florida.

The PRI Advisory Board was represented by PRI Track Ambassador Tom Deery, and representatives from E3 Spark Plugs, Taktical Solutions, Regis Communications, NASCAR, and MyRacePass were among those in attendance in the PRI Suite. Justin and Rebecca Starkey of VMP Performance in New Smyrna, Florida, were also on-hand. 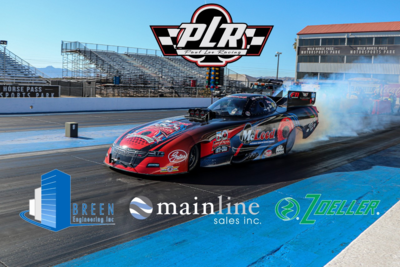 Paul Lee and his McLeod Racing funny car team will return to the Pomona Fairplex with Mainline Sales Inc., MSI International and BREEN Engineering to kick off the 2022 NHRA Camping World Series. Coming off a strong preseason test session, the Jim Oberhofer- and Dustin Heim-led team look forward to hitting the ground running for the funny car class. Lee, owner of the Wharton Automotive Group (McLeod Racing, FTI Performance, Silver Sport Transmissions) enters his 18th year of Funny Car competition. With the addition of Dustin Heim to the assistant crew chief position and several new crew members who have joined the team over the off-season, pre-season testing showed a glimpse into what the team is capable of for this year.

Extreme H is the first-of-its-kind series for hydrogen cars and will race on the exact dates and locations as the Extreme E series.

Extreme E, the maker of the all-electric off-road series, will launch an off-road hydrogen championship in 2024. Named Extreme H, the first-of-its-kind series will race on the exact dates and locations as the Extreme E series. The Extreme H car will retain the same powertrain and chassis used in Extreme E, but a hydrogen fuel cell will replace the battery as the principal energy source. Extreme H will feature two categories: full transition or combined racing. Officials plan to launch a prototype vehicle in early 2023. For more information, visit extreme-e.com.

The W13 vehicle was built for the 2022 technical regulations and features narrow sidepods and a rearward-placed engine layout.

Mercedes has revealed the car that Lewis Hamilton and George Russell will drive in this season’s championship. The W13 vehicle was built for the 2022 technical regulations and features narrow sidepods and a rearward-placed engine layout. Mercedes has won the constructors’ title for eight successive seasons, but relinquished the drivers’ championship as Max Verstappen snatched the crown from Hamilton on the final lap of the 2021 season. The W13 will officially launch on March 18–20 for the Formula 1 Gulf Air Bahrain Grand Prix. For more information, visit formula1.com.

The Holley High Voltage Experience is designed for the electric vehicle (EV) community to gather and experience performance on and off track.

Holley has announced the second annual Holley High Voltage Experience will return to Sonoma Raceway July 9–10. The event is designed for the electric vehicle (EV) community to gather and experience performance on and off track. The Holley High Voltage Experience will feature autocross, drag racing, road course action, plus a car show, vendor midway, skidpad and more. Additional details and tickets will be available at a later date. For more information, visit the Facebook event page.