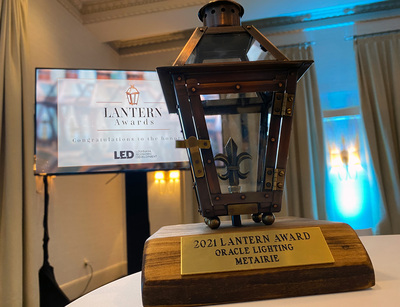 The Louisiana Lantern Awards provide an opportunity for the state to celebrate manufacturers from across Louisiana.

Oracle Lighting received the 2021 Louisiana Lantern Award last Wednesday evening during a special reception at the Hilton Baton Rouge Capitol Center. The company is one of eight manufacturers across the state to be recognized this year.

The Louisiana Lantern Awards provide an opportunity for the state to celebrate manufacturers from across Louisiana. The winning company for each district displays a contribution to the Louisiana economy and their local business communities through employee growth, increased revenue, facility expansion and community engagement. The Jefferson Parish Economic Development Commission (JEDCO) nominated Oracle Lighting for the special distinction this year. The lighting manufacturer was selected from the Greater New Orleans region to receive the coveted award.

Born from humble beginnings in a Metairie, Louisiana, garage, Oracle Lighting has grown into a global leader in the automotive lighting industry. The company was founded by Justin Hartenstein when he was just 18 years old. Now he and his wife, Tiffanie, run the business together, innovating in both product offerings and operations.  Today, Oracle employs more than 30 full-time team members and has made nine appearances on the Inc Magazine “Inc. 500/5000 List”, which highlights the nation’s fastest-growing small businesses. Oracle plans to expand the company’s headquarters to double the size of the main facility in 2022, which will allow Oracle to create more jobs and significantly increase their production capabilities.

In November of 2021 Oracle also received an honor from SEMA, when it was named the 2021 Manufacturer of the Year. Oracle Lighting has won many local, national and international awards for its work. The company gives back whenever possible. As an example, Oracle helped to donate thousands of PPEs to first responders and health care workers at the start of the pandemic. The founders also serve a number of local charitable organizations.

Redman’s passion and involvement in automotive performance began at an early age, growing up in Michigan surrounded by automotive racing and manufacturing history. He will spend time with each of RWB’s automotive brands to become familiarized with their leading components and technology, ultimately helping him champion customer relationships and sales and marketing initiatives. He will be based out of RWB’s Mentor, Ohio, headquarters effective immediately.

The new office will closely support all AP Racing’s U.S. customers, including its recent contract win with an OEM, which will adopt AP Racing components, with production beginning later in 2022. While AP Racing has been a mainstay of the U.S. market for some time, APRNA will enhance the connection between AP Racing’s global headquarters in Coventry, United Kingdom, and direct customers, including OEMs and race teams in the United States.

David Hamblin, managing director at AP Racing, commented: “Formation of our first U.S. office, AP Racing North America Corp., is a major milestone in the history of AP Racing and further development of the organization within the strategic North American automotive market. APRNA will support business for both road and race applications in the United States. Centrally located in Charlotte North Carolina, the new office provides the perfect location to service our expanding customer base.”

The new APRNA site is undergoing final fit out and is expected to open in April.

On the new IRONCLAD original series, “Oil & Whiskey,” the crew behind the creations brings listeners into the shop for discussions on the kind of content gearheads want: insights about the latest tech, updates about their custom builds, events, industry news, tips and more. Along with insights from the hosts, Jeremy Gerber, Phil Gerber and Josh Henning, listeners also get to hear the guys answer their questions, break down some of their favorite models and get to know the crew responsible for the shop’s award-winning collection of musclecars. Listen on Apple Podcasts or Spotify. 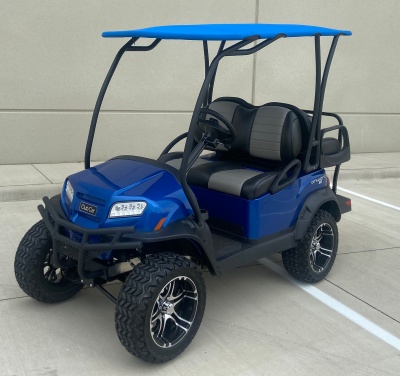 Meyer announced that the winner of its custom golf cart promotion is Quadstar Tuning. The golf cart is equipped with upgrades, including wheels, tires, lift, roof and rear seat. Meyer Distributing launched the Golf Cart promotion in September 2021, and ran it through the end year. The company partnered with Titan Fuel Tanks and Fluidampr to reward a qualifying customer.

The Google Partner program is designed for advertising agencies and third parties that manage Google Ads accounts for other brands or businesses. It is designed to empower digital agencies by giving them innovative tools, resources, and support to help their clients succeed and grow online.

Stertil-Koni has announced that Michael Tillbery has joined the company as service manager, based in the organization’s North American headquarters in Stevensville, Maryland. In his new post, Tillbery brings more than three decades of top experience specializing in customer care, technical vehicle service and maintenance support, service management, project coordination and heavy-duty equipment operation. Most recently, Tillbery worked for the Maryland Queen Anne’s County government as a heavy equipment operator, where he oversaw county-wide safe maintenance of roadways, bridges and overpasses and assisted with critical disaster relief. Prior to that he worked for Criswell Performance Car in Annapolis, Maryland, specializing in Audi and Acura as a service manager, dispatcher and quality assurance coordinator.

Live Fast Motorsports has announced that former general manager Jessica McLeod has been appointed as the company’s new CEO. McLeod will be working directly with the company’s team owners Matt Tifft and her husband, co-owner and driver B.J. McLeod. The McLeods have had many business ventures within NASCAR’s K&N, Trucks, Xfinity, and Cup Series. Jessica and B.J. co-own the Xfinity Series B.J. McLeod Motorsports (BJMMS), which fields three full-time stock cars (Numbers 5, 78 and 99).

CRP Automotive announced that Director of Engineering, P.T. Muldoon, has been named Chairman of the Technology & Operations Council of MERA—The Association for Sustainable Manufacturing.

Founded in 2021, the Technology & Operations Council is a peer group network that provides a forum for MERA member companies to discuss the latest techniques, developments, and equipment that are advancing the remanufacturing industry.

Muldoon currently oversees CRP’s Complex Electronics and Mechatronics R&D Center in Ann Arbor. Prior to joining CRP Automotive, he served as the Director of New Product Development - Electronics Remanufacturing for BBB Industries, where he helped head up the company’s Detroit Technical Center.

Optronics International announced that it will move its North American headquarters into a new 200,000-square-foot facility on a 17-acre campus as part of the company's 50-year anniversary. Accompanying the announcement was the introduction of a new 50th anniversary logo and a newly revised corporate website. Details of the new facility, logo, website and other related developments will be presented to the industry at Optronics booth 5191 during NTEA Work Truck Week, March 8–11.

With 700 staff members worldwide, Optronics will ultimately consolidate its three current Oklahoma-based operations into the new Tulsa facility and will maintain its Goshen, Indiana, location and its USA Harness manufacturing plant in Winnsboro, Texas. The Tulsa campus will serve as the company’s corporate headquarters, as well as a research and development lab, assembly plant and distribution hub, and will allow Optronics to immediately expand to accommodate rapid growth.