Oracle Red Bull Racing have revealed the car with which they will be contesting the 2022 Formula One World Championship—the RB18—in a collaborative broadcast with many of the team’s online followers. Christian Horner, Max Verstappen and Sergio Pérez joined forces with the Oracle Red Bull Racing engineering team to reveal the 2022 car to the world in a fan-first experience. The launch was hosted from their technology campus in Milton Keynes and streamed by thousands of fans.

Tickets are available for the dinner and awards ceremony and include single and table options. For more information, visit northcarolinamotorsportsassociation.org. 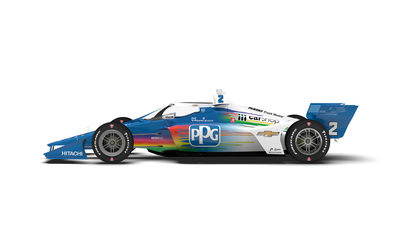 PPG has announced that it will renew its sponsorship of Team Penske and two-time NTT INDYCAR SERIES champion Josef Newgarden, who is set to drive the No. 2 PPG Chevrolet in 2022. PPG will once again sponsor Team Penske’s No. 2 Chevrolet, featuring the colorful new PPG livery unveiled in 2021. The car will be driven by Newgarden in eight NTT INDYCAR SERIES races this season. Newgarden, who has represented PPG on multiple occasions since joining the Penske team, claimed the INDYCAR SERIES Championship in 2017 and 2019. PPG’s longstanding relationship with Team Penske began in 1984 when PPG supported Penske’s numerous race cars. Today, PPG supplies refinish coatings for Penske Corporation’s racing, truck leasing and automotive collision-repair subsidiaries.

International motorsports governing body the Fédération Internationale de l'Automobile (FIA) has announced Alan Gow has been reappointed as president of the FIA Touring Car Commission and the World Endurance Commission. With his role extended through 2023, Gow enters his 13th year as president of the FIA Touring Car Commission, the body that oversees the FIA-sanctioned touring car competitions. He also retains his position as a member of the World Endurance Commission, which he has held since 2018. This role will also extend through 2023. For more information, visit fia.com/commissions.

Floyd “Money” Mayweather has partnered with Pit Viper to form The Money Team Racing (TMTR), which will make its NASCAR Cup Series debut with No. 50 Pit Viper Chevrolet at the Daytona 500 on February 20, 2022.

Legendary five-division world champion and boxing Hall of Famer Floyd “Money” Mayweather has partnered with sunglass giant Pit Viper to form The Money Team Racing (TMTR), which will make its NASCAR Cup Series debut with No. 50 Pit Viper Chevrolet at the Daytona 500 on February 20, 2022. Driver Kaz Grala will pilot the new NASCAR Next Gen Chevrolet with an engine from ECR Engines. Calling the shots from the pit box will be NASCAR Cup Series winning crew chief Tony Eury Jr. The co-owner of TMT Racing, William Auchmoody, an associate of Mayweather’s and a longtime member of the NASCAR community, will serve as the team’s general manager. For more information, visit nascar.com and themoneyteamracing.com.

Officials with Ultra4 Racing and King of the Hammers have announced the EV Spec Racing Program, an electric vehicle (EV) series that will compete with EV crate packages from Hypercraft and Dana Inc., along with supporting components from Yukon Gear and Axle and Holley/AEM. Eleven Ultra4 Racing teams have committed to the program to help develop and build EV-powered vehicles. The first race will take place in July 2022 in Attica, Indiana. For more information, visit ultra4racing.com.