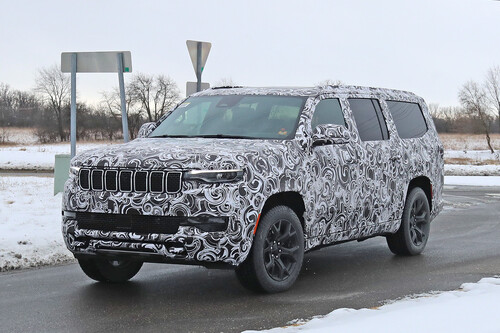 As the Jeep brand's all-new Wagoneer and Grand Wagoneer offerings are making their way into driveways across the United States and Canada, Jeep engineers are hard at work at an even longer version of their ultra-premium SUVs. This Wagoneer LWB model was caught on Michigan public roads testing in recent days, showing us that Jeep is serious about its Wagoneer offering competing with the likes of Cadillac’s Escalade, Lincoln's Navigator and GMC’s Yukon Denali.

This is the first time we have seen the Wagoneer LWB in public. The LWB model should be very close to the current SWB models in its trim and equipment structure. Design elements will be almost identical between the LWB and SWB models. The LWB models feature a longer rear window and a rear door that does not cut into the wheel opening, unlike the SWB model.

Like the Wagoneer SWB, the LWB base will feature the 5.7L V-8 with 392 hp and 404 lb.-ft. The eTorque hybrid system replaces the traditional engine-mounted alternator with a belt-driven motor generator unit. The motor generator unit works with a 48-volt battery pack to provide quick and seamless engine start/stop, torque addition to the engine crankshaft in certain driving situations and brake energy regeneration, which improves responsiveness and efficiency. The system enables up to 130 lb.-ft. of torque to be available on initial throttle tip-in

We can expect the Wagoneer and Grand Wagoneer LWB models to join the SWB models sometime in Q3 2022. It will be built at the Warren Truck Assembly Plant in Warren, Michigan. 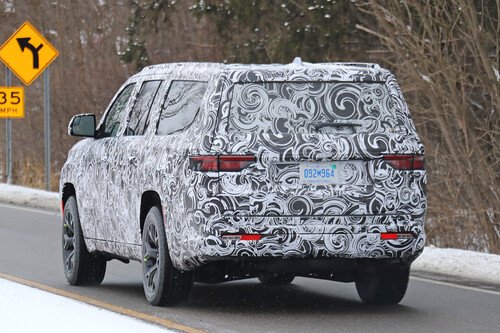