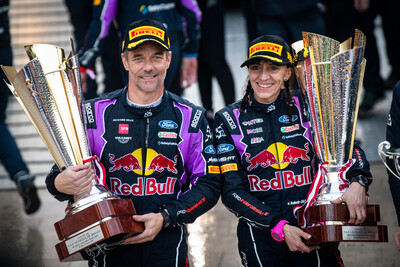 Sébastien Loeb became the oldest winner of an FIA World Rally Championship round after grabbing a Rallye Monte-Carlo victory from the under the nose of old foe Sébastien Ogier last Sunday. The 47-year-old Frenchman trailed Ogier by almost half a minute heading into the penultimate speed test of the four-day event in the French Alps. But when Ogier limped to the finish with a front left puncture, Loeb reclaimed a lead he had conceded to his compatriot on Saturday. He stayed calm through the final test to seal his eighth Monte-Carlo success in a Ford Puma by 10.5 seconds.

Loeb, starting his first WRC event for more than a year, was competing for the British M-Sport Ford squad in a one-off appearance. He joins Ogier at the top of the Monte-Carlo roll of honor with eight wins. His victory means he has topped the WRC podium in three different decades. Co-driver Isabelle Galmiche, a 50-year-old schoolteacher who was making her first top-tier start, became the first female winner of a WRC fixture since 1997.

Craig Breen finished almost 90 seconds further back in third in another Puma, giving the British-based M-Sport Ford squad an early lead in the manufacturers' championship. Kalle Rovanperä languished outside the top 10 after the opening night, but after set-up changes improved the balance of his GR Yaris, he soared up the order to secure fourth. Despite losing time with engine issues on Saturday, Gus Greensmith claimed fifth in another Puma after winning his first special stage at WRC level. Thierry Neuville was sixth in a Hyundai i20 N.

The championship switches to Scandinavia next month for the only pure winter round of the season. Rally Sweden takes place in Umeå on February 24–27.

Forrest Lucas, Founder of Lucas Oil, Named to the Missouri Sports Hall of Fame Class of 2022

Lucas Oil Products Inc. has announced the induction of Forrest Lucas, founder of Lucas Oil and namesake of Lucas Oil Speedway and Lucas Oil Stadium, into the Missouri Sports Hall of Fame. He is recognized worldwide as a generous supporter of motorsports and the innovative pioneer of problem-solving oils and fuel treatments. Lucas and his fellow inductees will be honored in ceremonies on Sunday, February 6, in Springfield, Missouri.

Lucas founded the company in 1989 alongside his wife Charlotte in an effort to create oil and fuel treatments for the trucking industry that would reduce mechanical failures and increase mileage. Since the company’s realization, Lucas has created engine oils and fuel treatments for just about any machine with an engine or moving parts. Beyond being a self-made businessman, he is also a generous philanthropist and sports marketing legend—famous for strategic sponsorships spanning amateur and professional sports of all kinds.

Lucas’ numerous contributions to the automotive industry and sports nationwide are traceable over decades. He has made significant investments in sports across the Midwest and around the country. From the Lucas Oil Speedway, known as “The Diamond of the Dirt Tracks” in Wheatland, Missouri, to high-profile sponsorships like Lucas Oil Stadium, Home of the Indianapolis Colts, as well as exclusive oil of Monster Jam and the Dallas Cowboys.

He is accompanied into the 2022 Hall of Fame Class by St. Louis Cardinals outfielder Matt Holliday and Ken Morrow from the “Miracle on Ice” 1980 USA Olympic Gold Medal hockey team. Missouri Sports Hall of Fame’s CEO & Executive Director Jerald Andrews will introduce Lucas and the Class of 2022 Enshrinement at the Highland Springs Country Club with a reception presented by Reliable Toyota to follow.