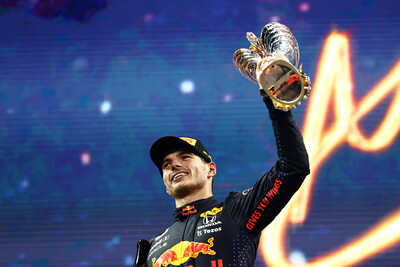 Max Verstappen overtook rival Lewis Hamilton on the final lap of the final race of the 2021 FIA Formula One World Championship season to win his maiden title as a late safety car at Yas Marina brought drama to the Abu Dhabi Grand Prix last Sunday. By the end of the season, after Verstappen took 10 victories, 10 pole positions and 18 podium finishes, the Dutchman became Red Bull's second world champion after Sebastian Vettel annexed the title for four straight years from 2010–2013. Red Bull’s title ends Mercedes’ seven-year run that coincides with the introduction of the 1.6L V6 turbo hybrid era from 2014, while he becomes the 34th world champion in F1 history dating back to 1950. It is the first title for Honda since Ayrton Senna won the 1991 crown and comes in the engine manufacturers' final race with the team.

Heading into 2022 Texas Motorplex, the only quarter-mile multi-use racing facility in North Texas and home of the Stampede of Speed and NHRA Texas Fall Nationals, will once again host dozens of specialty events drawing fans from across the country. The addition of the Stampede of Speed in 2021, the largest continuous motorsports event second only to the Indy 500, will anchor a season of racing action in 2022. For the complete schedule, visit the Texas Motorplex website.

Each Series will feature a 10 to 15 race schedule with a combined point fund approaching $100,000. Long-term goals center around increasing fan interaction and engagement and building brand awareness for the sport of non-wing racing, according to WRG. Added to the annual DIRTcar Nationals, the Xtreme Outlaw Sprint Cars will debut at Volusia Speedway Park, February 14–15, 2022, in Barberville, Florida. In addition, the Xtreme Outlaw Midgets will be added to the Ironman 55 at Federated Auto Parts Raceway at I-55, August 5–6, 2022, in Pevely, Missouri. Additional events will be announced at a later date. The newly created Series will be guided by Casey Shuman, a veteran sprint and midget racer who continues to serve his fourth year as the World of Outlaws late-model series director. For more information, visit xtremeoutlawseries.com.

“After careful consideration on the best direction forward for Auto Club Speedway, the difficult decision has been made to permanently close Auto Club Dragway. We thank all of the competitors, fans and corporate partners who made so many wonderful memories at Auto Club Dragway through the years, and we look forward to making new ones as we embark on our 25th Anniversary Season at the 2-mi. oval in 2022.”

It was previously announced in April that the drag strip would remained closed for the 2021 season “due to the ongoing COVID-19 pandemic.” The track was first built in 2001 outside of the backstretch of Auto Club Speedway. For more information, visit autoclubdragway.com or autoclubspeedway.com.

SPEED SPORT, the motorsports media company, and Riivet, the provider of motorsports live streaming and video production, have established SPEED SPORT 1. The new joint venture builds upon the SPEED SPORT Network launched in 2019. SPEED SPORT 1 broadcast rights holders (tracks, sanctioning bodies, promoters and broadcasters) will be given the opportunity to participate in the growth of SPEED SPORT 1 since participation will be based on longevity, broadcast performance, content syndication and other parameters to be announced in the coming weeks. The new structure incentivizes and rewards its affiliates to develop their broadcast assets and unique brands while also showcasing and promoting their content via the SPEED SPORT 1 digital television channel and the entire SPEED SPORT network of media. For more information, visit speedsport1.com.