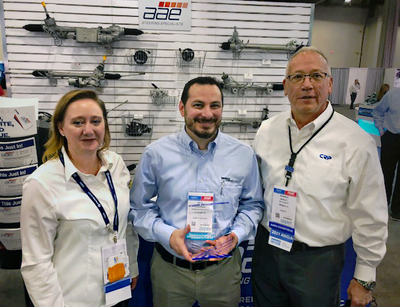 CRP Automotive has named Matt Zarlenga of the Sherman-Pearson Company as its 2021 U.S. Sales Representative of the Year. Zarlenga has been with Sherman-Pearson Company since 2019 and has represented CRP Automotive’s AAE, REIN, Pentosin and AJUSA brands in the Northern and Central Ohio market. CRP Automotive presented the award to Zarlenga during the 2021 AAPEX Show in Las Vegas. The Rep of the Year award was presented by CRP Automotive Channel Sales Manager Nicole Ryan and U.S and Canada Sales Director Warren Morley. Zarlenga accepted the award on behalf of Sherman-Pearson, noting that the accomplishments in 2021 were the result of a solid team effort and made possible only by the dedication and hard work of everyone involved.

Prior to joining Sherman-Pearson Company, Zarlenga was a manufacturers representative with Bowdoin Marketing specializing in the automotive aftermarket. He also worked in the OE dealership channel as a sales consultant and warranty administrator. 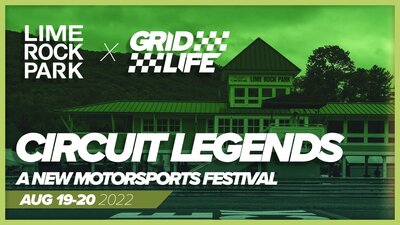 GRIDLIFE hosted the “State of the Grid” press conference last Friday at the 2021 PRI Show, where they revealed their 2022 competition calendar, and announced plans for a new festival expansion to the Northeast called “Circuit Legends,” to be hosted at Lime Rock Park, August 19–20, at the celebrated circuit in Connecticut.

Circuit Legends is a new festival concept for GRIDLIFE—known for its music and motorsports festivals with late-night concerts. The Circuit Legends concept won’t feature musical acts, but instead celebrate motorsports culture of the mid-’80s through mid-’00s by featuring vehicles that represent “the golden age of touring car racing”. The goal is to resurrect all the vehicular heroes from around the world and set them loose in the hills of Lime Rock in a celebration of touring-car racing.

Gold Eagle Company, a privately held, family-owned and operated manufacturer of performance chemicals, surface treatments and a full-service contract packager, has announced its commitment to innovation ahead of its 90th anniversary in 2022. Matt Banach has been named executive vice president of market innovation and will have full responsibility for new product development and innovation to meet and exceed consumer expectations. He will also operate as the Gold Eagle brands/operations liaison involving packaging, supply-chain solutions and product management/forecasting to ensure continued innovation across all departments within the organization. Banach joined Gold Eagle in 2011 as a technical sales representative and has held the positions of event manager, brand creative director, and most recently, vice president of marketing.

Additionally, in support of the company’s product and marketing innovative efforts, Jennifer Robertson has been named director of marketing with full-scope responsibility for consumer insights and brand management, digital marketing, content marketing and event marketing. Robertson joined Gold Eagle in 2001 and has held many positions within brand management, playing an integral role over the years in helping build the majority of the company brands, most notably STA-BIL and 303.

Beddingfield joins a team of in-house PowerPak product experts and sales representatives and will provide technical product support including answering questions about the PowerPak shelf stock products, PowerPak Plus, custom-designed pistons and more. Motorsports Applications Engineer Fair is a recent graduate from Tennessee Tech University (Cookeville, Tennessee), while Wright is a recent graduate from Minnesota State University (Mankato, Minnesota). Both will work in the development of custom performance race pistons and provide input on the design and specification needed to accomplish project goals, utilize CMM and 3D scanning equipment for final design and ensure quality control.

Skyjacker Suspensions has promoted Armond Gilmore, a former graphic designer, to media manager. Gilmore has worked in-house and remotely with the company for five years. He has recently returned from a tour overseas as CPT Armond Gilmore, United States Army 42B Commanding. As media manager, Gilmore will ensure that key messages align with vital business strategies decided upon by upper management. His responsibilities include building and managing the organization’s social-media profile and presence; promoting additional projects to support new-product launches; monitoring online and offline campaigns and reporting on results; and developing and producing content via social media, websites and other distribution channels. Gilmore will also lead the charge in collecting and building video content for the company’s website, YouTube and other marketing channels.