Arnott, the provider of air suspension products for passenger vehicles, has announced the acquisition of JRi Shocks based in Mooresville, North Carolina. JRi Shocks will continue to serve its existing markets and customers, “but will now be better positioned to grow those markets even further while also expanding into new ones,” according to Arnott. Customers should see no change in the day-to-day operations of the business. JRi Shocks was founded in 2007 by Jeff Ryan. Ryan, JRi Shocks Vice President of Operations Det Cullum, and JRi President and CEO Ray Evernham were all partners at the time of the acquisition. Ryan will stay on to continue managing all engineering activities for the company, while Cullum and Evernham will remain involved with the company in advisory roles.

RaceQuip and Carolina Racing Supply have partnered to bring the all-new RaceQuip Super Store concept to the Carolinas. CRS has devoted a large portion of its retail showroom to showcase the safety equipment that the RaceQuip brand has to offer. The company has backed it up by filling its warehouse with a large inventory of the complete line of safety gear and accessories. 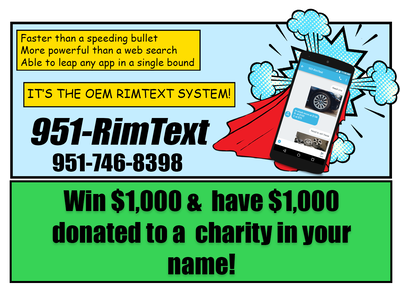 1-800EveryRim OEM Wheels, in celebration of 500,000 RimText messages, will award $1,000 to the winner of its contest and will also donate an additional $1,000 to charity in the winner’s name. Available charities are Wounded Warrior Project, St. Jude Children's Research Hospital and the American Cancer Society. The company’s RimText system, 951-RimText (951-746-8398) must be utilized to enter. Text “Contest” to 951-746-8398. After registration, subsequent messages must be legitimate inquiries into the buying or selling of factory original alloy or steel wheels. After registering, every message is a chance to win. The contest closes February 27. Management approval is required. For all contest rules, visit 1800everyrim.com/rimtext-contest.

American Pacific Group (APG), a San Francisco Bay Area-based private equity firm, has announced that it has acquired Fellers Inc., a distributor of vinyl wrap supplies. Fellers, a Tulsa-based company, distributes vinyl wrap films and wrap supplies to sign and graphics shops and automotive wrap installers. Founded in 1986, Fellers has supplied the sign and graphics community with a broad range of products to meet its end-customers’ diverse needs. Over the past 30 years, Fellers has expanded to 58 locations across the United States and developed a reputation of stocking top brands and delivering to its 40,000+ customer base. Over the last decade, Fellers has emerged a leader in supplying the growing automotive color-change wrap segment.

“We are social networking the old-fashioned way, and now with the tops of our industry,” said CTDA President Billy Eordekian.

The event is open to the tire and wheel industry and is free to tire and wheel retailers, as well as CTDA members. CTDA urges early RSVPs as an overflow crowd is likely. Sponsorships for the event are still being accepted, as well as door prizes and table favors.

Although no local Coronavirus related restrictions are currently in place, CTDA is monitoring the situation closely.

After more than two decades of work with IndyCar, World of Outlaws and USAC race teams, Geoff Buxton has joined Wilwood Engineering’s team of field sales and support representatives. The team of experts spends weekends at tracks around the country for trackside brake system support. Originally from Australia, Buxton had become a full-time resident of the United States following a stint with an Australian sprint car team. In the United States, he became a member of Randy Hannagan’s World of Outlaws crew until later working on IndyCar and Champ Car World Series teams. His resume also includes time with the Andretti and A.J. Foyt racing teams, as well as Indy Lights, Global Rallycross, Sprint, Midget and other motorsports disciplines.