Rob MacCachren was driver of record for San Diego’s budding youthful super star Luke McMillin and rose above the rest in a field of 299 starters last Friday to win the overall and SCORE Trophy Truck title in the season-ending BFGoodrich Tires 54th SCORE Baja 1000, presented by 4 Wheel Parts. Starting second physically on the road in the elapsed time race and splitting the driving in McMillin’s Big Blue M racing machine all-wheel drive 4 Wheel Parts/BFGoodrich Tires No. 11 Chevy Silverado, the duo worked their way to the front of the pack and finished the 1,226.35-mile race down Mexico’s Baja peninsula in 20 hours, 45 minutes and 59 seconds with an average speed of 59.05 mph. The SCORE Baja 1000 is at the pinnacle of motorsports as the oldest, most iconic, longest continuously held desert race in the world. Celebrating its 48th season in 2021, this race is the flagship event of the SCORE World Desert Championship. For complete results, visit the SCORE International website. 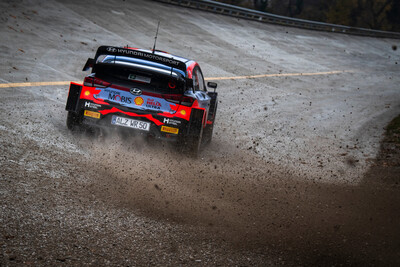 Dani Sordo completed the podium in a Hyundai i20, 14.0sec behind Elfyn Evans.

Sébastien Ogier and Julien Ingrassia swept to an eighth FIA World Rally Championship title in nine seasons in Italy last Sunday afternoon. The Frenchmen ended their careers together with victory at FORUM8 ACI Rally Monza after a showdown with Toyota Gazoo Racing team-mate Elfyn Evans. The lead changed hands six times across three days of challenging speed tests in the foothills of the Italian Alps and at Monza’s Temple of Speed circuit.

The outcome was decided when Evans spun in the penultimate speed test, allowing Ogier to win by 7.3 seconds in a Yaris World Rally Car. Ogier will step back from full-time driving next year, while this marked Ingrassia’s final rally. His championship-winning margin was 23 points from Evans. Their 1–2 finish ensured a clean sweep of the major titles as Toyota also secured the manufacturers’ honors for the first time since 2018 after winning nine of the 12 rounds.

Dani Sordo completed the podium in a Hyundai i20, 14.0sec behind Evans. Spaniard Sordo demoted teammate Thierry Neuville on Saturday afternoon when the Belgian spun into a barrier. Neuville ended 10.7 seconds behind. Oliver Solberg scored a career-best fifth place, despite stalling his i20’s engine twice in the final stage. Teemu Suninen climbed to sixth in a similar car when Takamoto Katsuta spun into a barrier and broke his Yaris’ front left suspension in the penultimate stage.

The event marked the end of the World Rally Car era after 25 seasons. Next year will bring the introduction of new hybrid-powered Rally1 cars to the championship. 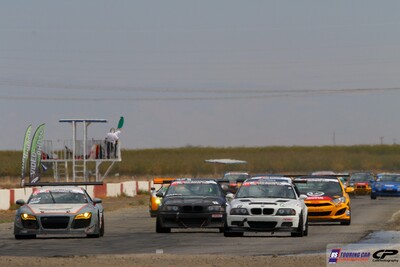 Reza Arsham scored a win at the Buttonwillow Raceway Round 7 in the GoGoGear.com/Konig Wheels Honda Civic. Photo credit: CaliPhotography

Arsham was driving the GoGoGear.com/Konig Wheels Honda Civic with the new Hasport/KTuned powerplant. He was the quickest car in every session and found himself on pole position but the race was a different story. The other competitors turned up the speed and Arsham found himself getting caught by Andy Chittum’s LeMans Karting Mazda MX5 and Matthew Rivkin’s Cool Boxx BMW 330i. Chittum and Rivkin were battling for second place when the BMW tapped the Mazda resulting in the Mazda spinning in the Off Ramp Turn. Rivkin took after Arsham and soon caught him and forced Arsham into a mistake to claim the win. Afterwards, the stewards issued a penalty to Rivkin for the body contact and he was dropped to third place, which gave the victory to Arsham. Taking second place was Brad Austin’s TNI Racing Mazda MX5 who is the current points leader.

In Super Touring, it was a BMW vs. Audi battle with the two AR-G Motorsports BMWs of Lau and Daniel Rose, who were trying to beat the Cool Boxx Audi R8 of Victor Czapla. The Audi was the quickest car but Lau used his experience to put his BMW M3 in front and took the win. Czapla finished second and Rose finished third.

With one race left in the championship, a double points two-hour race, anything can still happen at Thunderhill Raceway next month.