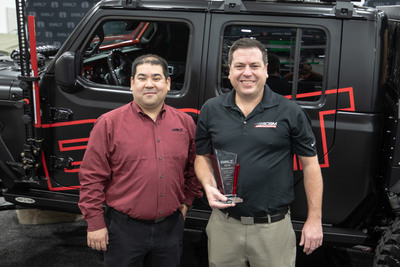 BOLT Lock named Thom Bernheisel of Considine Sales & Marketing its Sales Representative of the Year at the 2021 SEMA Show. BOLT Lock presents this annual award to recognize outstanding sales achievements and excellent customer service among its network of manufacturer’s representatives. Bernheisel has worked at Considine Sales & Marketing for 15 years and covers a territory that includes automotive and truck aftermarket wholesalers in the Midwest and Great Plains.

LSI Chemical has announced a new distributor agreement with APOLCO, which has sales offices in the Netherlands, Ukraine, North Africa and the United Arab Emirates, where the company benefits with having staff proficient in the local language(s), local business practices and currency exchange. The agreement provides APOLCO with the right to sell both the LSI Chemical line of products for formulation of lubricants (downstream oil) and petrol refinery and jobber blends, as well as Hot Shot’s Secret performance additives and oils in more than 20 countries throughout Europe, the Middle East and Africa. This agreement doubles the size of countries where the products can be sold internationally, including E.U. (excluding the United Kingdom and Ireland), Abu Dhabi, Ajman, Dubai, Fujairah, Ras Al Khaimah, Sharjah, Umm Al Quwain, Oman, Qatar, and north Africa from Egypt to Mauritania, Cameroon, Kenya, Senegal, Ghana, CIS and Russia.

K&N is pleased to announce that Mo Ayad has joined the company as the vice president of new product development marketing. Ayad possesses an expansive knowledge of automotive performance products, and his expertise will help facilitate K&N’s continued growth in the performance filtration segment. Ayad was a driving force behind the sales relationship between Turn 14 and K&N, and many of its resulting successes. He previously worked in performance automotive at AutoAnything.

K&N has focused on expanding its leadership and management teams in 2021 in order to facilitate continued category growth and expansion. Several new product lines have launched in the past two years with advancements in additional categories slated for 2022.

BorgWarner Appoints Sara Greenstein to Board of Directors

BorgWarner has appointed Sara Greenstein to its board of directors. Greenstein was the president, CEO and board member of Lydall, a global manufacturer of value-added engineered materials and specialty filtration solutions. Prior, Greenstein served as senior vice president of United States Steel Corp., where she managed the company’s $4 billion consumer solutions business unit.

Nexen Tire America has announced the relocation of its U.S.-based headquarters to Richfield, Ohio. The new headquarters joins its North American technical center located at 4014 Wheatley Rd. The $5.2 million 35,540-sq.-ft. facility opened in 2019 and is one of three technical centers Nexen Tire operates worldwide. Nexen Tire will continue to utilize its three U.S. distribution facilities located in California, Georgia and Ohio as well, providing tires to its customers and its network of dealers faster.

VP Racing Fuels Inc. has announced a major expansion of its operations in Tennessee, including a second new facility in Carroll County. VP is increasing its total Tennessee investment to $14.2 million to expand its Huntingdon operations and acquire a new facility in McKenzie near the Carroll County Airport. The project in total will create 150 new jobs and comes less than three years after the company invested more than $4 million to establish its Huntingdon operations. The expansion at VP’s current Huntingdon facility will include the company’s investment in a $7 million tank farm for blending, storage and filling of packaged products. The new McKenzie location will include blow mold machinery to manufacture VP’s Motorsport Containers and the VP apparel line, introduced last year.

Lubrication Specialties Inc. (LSI) has announced the addition of James Palasota as the company’s COO. Palasota has a record of developing startups into global brands, conceptualizing strategic direction and developing the internal processes to ensure integration at all levels of operations, nationally and internationally. As vice president of sales and marketing for Sottera Inc., he was responsible for introducing NJOY electronic cigarettes and vaping products—one of the first on the market in the United States. At Sottera, he secured strategic partnerships in retail channels with multiple Fortune 500 companies growing sales to $4 million and was responsible for rolling out a global sales strategy. As vice president of Illumination International, DBA The Amazing Flameless Candle, Palasota successfully executed and led strategies to make this product a household name. Most recently, he served as COO for AFC Industries and Herbal Brands and as senior vice president of operations for UtekTik Inc. in Scottsdale, Arizona.