Spotlight on the SEMA Battle of the Builders

The 2021 SEMA Battle of the Builders competition is heating up. There’s less than a week to go before the judges begin the difficult process of choosing the Top 40 and then the Top 12. It’s impossible to highlight the more than 240 entries we’ve received, so we’ve chosen a few that stand out. 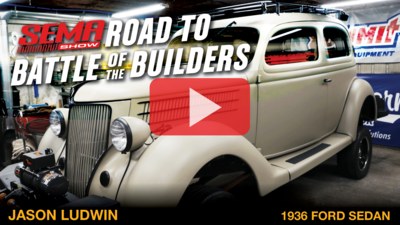 Ludwin lifted the sedan and widened the wheel arches by a few inches to house the big 35-in. tires. He added front and rear aftermarket Wrangler bumpers from Body Armor; each one housing with a winch from Mile Marker and WARN Industries, respectively. Hidden beneath the running boards are Rock Slide step sliders. The flathead V8 was exchanged for an L33, a high-output 5.3L Chevy small block running a FiTech fuel-injection system.

The original dash was retained, and hydro dipped so that it would match the wood steering wheel. A few modern amenities were also added including a tilt steering column and floor shifter, both from Summit Racing. The factory sunroof was also kept with an updated retractable ragtop. 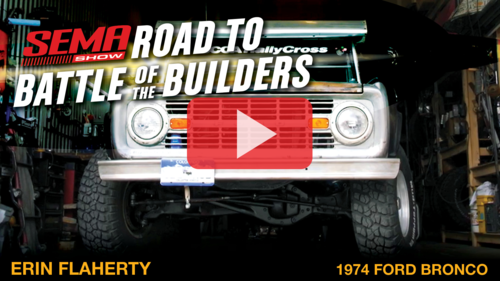 Flaherty widened the fenders so they could clear the massive BFGoodrich KM2 Mud-Terrain T/A tires, which are paired to King Prerunner coil-over racing shocks. Moving under the hood reveals the Ford 289 that Flaherty rebuilt himself, which is bolted to a C4 automatic transmission. The K&N air filter and FILTERWEARS pre-filter are a dead giveaway that this truck isn’t just a show pony.

The cab features numerous mods, including a DOM roll cage, Winters Performance Sidewinder shifter, Corbeau seats with G-FORCE racing harnesses and more. A thumb switch inside the cab operates the adjustable aluminum wing that creates down force on the track. 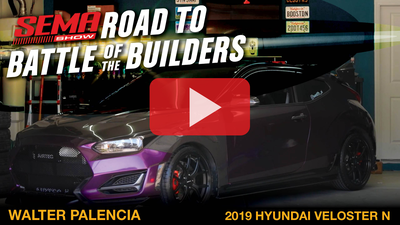 Toyo Proxes Sport rubber is wrapped around the Drifz 315 wheels with Cquence brake rotors to shorten the stops. The carbon-fiber side skirts, front lip, diffuser and rear spoiler are from Adro while VIS Racing was used for the carbon fiber hood. A purple iridescent wrap by KPMF perfectly complements the carbon-fiber pieces. 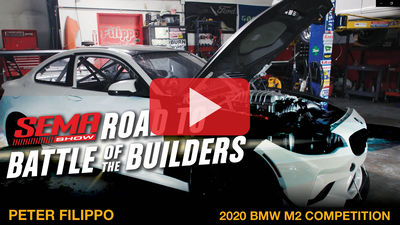 Filippo swapped the original 3.0L twin-turbo inline six with a 6.2L V8 from the SRT Hellcat, which was solid-mounted to the chassis. He also rebuilt the tensioner so that it’s only running water pump to free up some space and power.

Five Star Racecar Bodies reproduced all the windows in a durable polycarbonate for lightweight, track-ready performance. Behind the windshield, the custom fabrication continues. The HEMI pushed into the cockpit and required a house-built extended steering column, which also meant the pedal box, Sparco seat and shifter had to be moved back. The custom roll cage came from the team at TC Design. 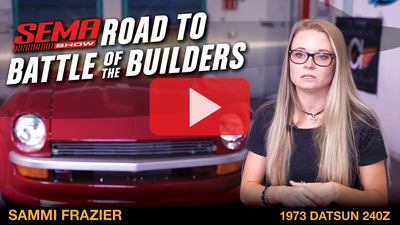 Up front, Frazier cut pockets into the quarter panels and the edges were trimmed for the bumper to recess into the front of car.  A BRE rear spoiler with some custom mods was added in addition to a “Fairlady R” badge. A set of Bogart Racing Wheels were refinished and painted in-house and fit snugly beneath the flared fenders. 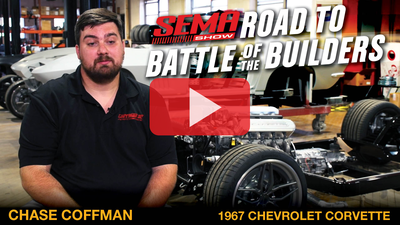 The chassis is fabricated in-house where they introduce internal structuring inside the frame rails to give needed strength to the body. The entire body was stripped so all the flaws could be corrected, the firewall was smoothed out and the gaps were narrowed.
The powertrain includes a GM LS427 featuring custom-machined billet valve covers and specially designed headers by Ultimate Headers. A TREMEC five-speed is bolted up to the small block helping to route the 570 ponies to the rear wheels.

The all-custom interior will feature a widened dash, touchscreen controls, LED accent lighting throughout, custom-fabricated seats and leather and suede touch surfaces. A coat of custom mixed Spies Hecker paint by Axalta will finish off the second-gen Vette.

Qualified industry personnel will be able to see the competition unfold live during the SEMA Show, November 2–5. The general public is welcome to attend SEMA Ignited, the official SEMA Show after-party, where they will also see the winning vehicles, as well as hundreds of SEMA Show cars and trucks parading out of the Las Vegas Convention Center following the close of the SEMA Show. SEMA Ignited will also feature Formula DRIFT cars in action, vintage dragsters, food trucks, music and much more.