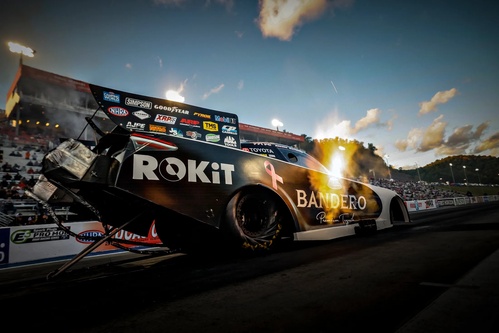 Alexis DeJoria powered to her first win in more than four years, rolling to the victory in Funny Car last Sunday at the NHRA Thunder Valley Nationals at Bristol Dragway. Mike Salinas (Top Fuel) and Angelle Sampey (Pro Stock Motorcycle) also won in their respective categories at the 18th of 20 races during the 2021 NHRA Camping World Drag Racing Series season and the fifth race in the Countdown to the Championship playoffs. DeJoria qualified No. 1 for the first time since 2016, and went 3.921 seconds at 327.66 mph in her 11,000-hp Bandero Premium Tequila ROKiT Toyota Camry in the final round to beat J.R. Todd, who went 3.939 at 326.22. Todd jumped to third in points and pulled to within 83 points of Ron Capps with two races remaining in the 2021 season. Capps’ lead over Matt Hagan is just one point.

In Top Fuel, Salinas picked up his second straight victory at Bristol Dragway, once again beating points leader Steve Torrence in the final round. Torrence ran into issues right off the starting line and Salinas’ run of 3.845 at 245.05 in his 11,000-hp Scrappers Racing dragster was enough to give Salinas his third career victory. By advancing to the championship round, Torrence also opened up a 73-point lead on Brittany Force heading to the last two races.

In Pro Stock Motorcycle, Sampey scored her second victory in the Countdown to the Championship. In an all-female final round, Sampey beat Karen Stoffer on a holeshot on her Mission Foods/Vance & Hines Suzuki, as her run of 6.773 seconds at 196.85 held up. It gave Sampey her 45th career victory and second this season, as she pulled within 25 points of Matt Smith, who also holds a 56-point lead against Steve Johnson heading to the final two events. 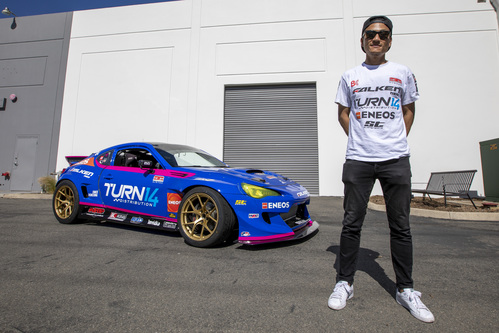 After 18 years of competing as a driver in the Formula DRIFT championship, Turn 14 Distribution driver Daijiro Yoshihara has announced his retirement from the series. Daijiro, who is known by his fans as Dai, participated in 128 events, stood on the podium 28 times and won eight events. The defining moment for him was when he secured his 2011 Formula DRIFT Championship. Although Dai is retiring from the Formula DRIFT series as a driver, he will pursue other opportunities as a professional driver and brand ambassador, along with other business ventures. 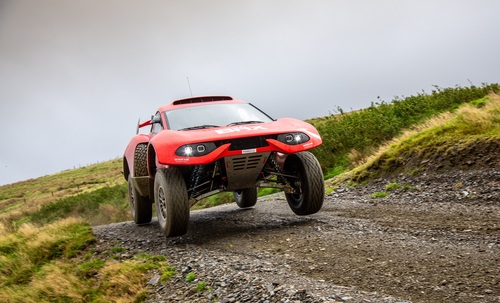 AP Racing has become a technical partner to Bahrain Raid Xtreme (BRX). The team’s car, the Prodrive Hunter, has been re-designed by UK-based motorsport specialists, Prodrive, to meet new FIA T1+ cross country regulations and will compete at the 44th running of the Dakar Rally, which will take place in Saudi Arabia in January 2022.

Alongside bespoke billet monobloc calipers, AP Racing is supplying its latest D drive Ø355 disc assemblies, the all-new pull type pedal box with master cylinders and its Ø184mm cerametallic clutch for the updated Hunter T1+. The program has already seen success this year, culminating in the team setting eight out of a possible 11 fastest sector times at the Baja Aragon event in July. The Hunter has now been revised with bigger tires, more suspension travel and a wider track, to meet the new T1+ regulations, devised to balance the performance of the two- and four-wheel drive cars. 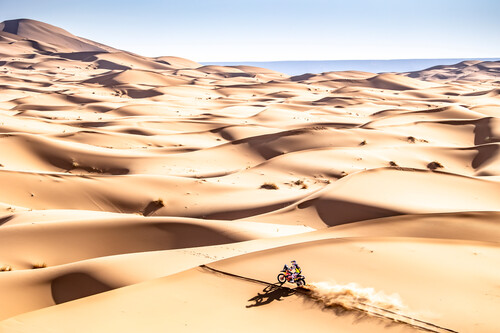 The Red Bull Desert Wings squad are celebrating yet another world title at the 2021 Rallye du Maroc as Austrian biker Matthias Walkner of Red Bull KTM Factory Racing secured his second FIM Cross-Country Rallies World Championship. Second place at Rally Kazakhstan and a win at the Silk Way Rally had put Walkner on the verge of reclaiming the World Championship he first won in 2015. The KTM Factory biker arrived in Morocco knowing a podium finish could wrap up the championship in his favor with a race to spare. Walkner was joined at the finish by teammates Kevin Benavides (ARG) and Toby Price (AUS) who also put in plenty in valuable kilometers ahead of next January’s Dakar while Sam Sunderland (GBR)—the fourth Red Bull KTM Factory Racing biker—withdrew on Stage Four while feeling unwell.

Australian Daniel Sanders’ third place gave GasGas Factory Racing their first-ever World Championship podium finish. Sanders will race next month's Abu Dhabi Desert Challenge aiming to secure a runners-up result in the 2021 FIM Cross-Country Rallies World Championship in a remarkable debut season for the best placed rookie at the 2021 Dakar. The Red Bull Off-Road Junior Team will be back in action at the Abu Dhabi Desert Challenge next month.

Formula 1 has announced a record-breaking 23 Grand Prix schedule for 2022, which opens in Bahrain on March 20, and closes in Abu Dhabi on November 20. The new Miami Grand Prix, set for May 8, joins the United States Grand Prix—set for October 23 at the Circuit of The Americas—on the calendar. Like 2021, F1 will not visit China, but will return “as soon as [pandemic] conditions allow.” Next season will also usher in the new 2022 F1 car, which is designed “specifically to promote better racing” with the potential for more overtakes. The vehicle was originally slated to be released during the 2021 season but was delayed due to the pandemic. For the complete schedule, visit here or formula1.com. 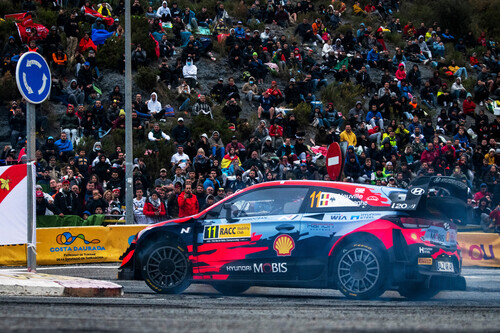 Thierry Neuville stormed to his second FIA World Rally Championship victory of the season with a commanding display at RallyRACC – Rally de España last Sunday afternoon. The Belgian took control of the penultimate round with eight straight fastest times in his Hyundai i20 across the middle of the three-day asphalt rally to secure back-to-back Spanish victories by 24.1 seconds.

Second place for Elfyn Evans in a Toyota Yaris means the fight for the 2021 drivers’ title goes to a final-round decider in Italy next month. He headed Dani Sordo’s i20 by 11.2 seconds and trails teammate Sébastien Ogier by 17 points. A maximum 30 remain available. Sordo, who won all four of Sunday’s special stages, demoted Ogier and claimed the final podium place. Neuville and Sordo’s 1-2 in the bonus points-paying Power Stage means the fight between leader Toyota Gazoo Racing and Hyundai Motorsport for the 2021 manufacturers' crown will also go to the last round. The final round at FORUM8 ACI Rally Monza will take place on November 18–21.

Tony Stewart, the championship-winning race car driver, is joining the NHRA as a team owner in 2022. Tony Stewart Racing (TSR) will field two full-time entries—one in Funny Car for 39-time event winner Matt Hagan and one in Top Fuel for nine-time event winner Leah Pruett, who is engaged to Stewart. TSR will make its NHRA debut during the 2022 season opener on February 17–20, at Auto Club Raceway at Pomona.

Online racer entry applications are available through Friday for November’s internationally-televised season-ending BFGoodrich Tires 54th SCORE Baja 1000, presented by 4 Wheel Parts, the final round of the four-race 2021 SCORE World Desert Championship. Starting and finishing under strict BioSecurity health and safety protocols in Ensenada, Baja California, Mexico, and in La Paz, Baja California Sur, race-week activities and the race itself will be held November 15–20. It will be a 1,227-mile race down Mexico’s Baja California peninsula.

Racer entry applications are available at www.SCORE-International.com under “Race Info” on the SCORE Baja 1000 page. Questions should be directed to SCORE Registration and Membership Director Audreonna Garcia at 775-852-8907 or via email at registration@score-international.com. Online racer entry applications will be accepted through 5:00 p.m. (PDT), Friday, October 22.

The Lucas Oil Late Model Dirt Series (LOLMDS) has announced the 2022 schedule, with a groundbreaking lineup that includes 65 feature events at 35 different venues across 18 states. Of those, 17 events will offer a top prize of more than $20,000—including 11 marquees that pay $50,000 or more to the winner. In addition, next year’s Lucas Oil National Champion will receive $150,000; second place will earn $75,000; third place garners $50,000. The year-end points fund for the Top-12 in the Lucas Oil Late Model Dirt Series will total more than $500,000.

The Series will head to new venues in 2022, including:

For the first time since 2013, the Lucas Oil Late Model Dirt Series will return to West Virginia Motor Speedway in Mineral Wells, West Virginia, June 3–4. For the complete 2022 schedule, visit the series website.

Three trips to the Devil's Bowl Speedway in 2021 and three trips to Victory Lane later, J.J. Hickle added his name to the list of winners at the 48th running of the Devil's Bowl Winter Nationals and Lanny Edward Memorial with the Lucas Oil American Sprint Car Series presented by the MAVTV Motorsports Network. For complete results, visit www.ascsracing.com.

The final two rounds of the 2021 season are next, with Blake Hahn and Hickle only 52 points apart. The championship will be settled at the COMP Cams Short Track Nationals presented by Hoosier Tires on Friday, October 22, and Saturday, October 23, at I-30 Speedway in Little Rock, Arkansas. Tickets and event information are online at www.i-30speedway.com. The race will be shown exclusively on FloRacing.com.