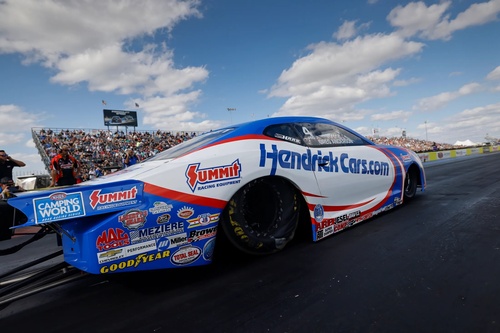 Anderson capped off another brilliant weekend in Dallas, earning his sixth victory at Texas Motorplex when Chris McGaha went red in the Pro Stock final round. For his part, Anderson went 6.624-seconds at 206.32 mph in HendrickCars.com Chevrolet Camaro to cap off his historic day and weekend. The victory also gave him the most Pro Stock wins in Texas Motorplex history and extended his points lead in the process—81 points ahead of defending world champ Erica Enders.

In Top Fuel, Justin Ashley beat points leader and three-time defending world champ Steve Torrence on his home turf, as Ashley went 3.759 at 326.40 in his 11,000-hp Smart Sanitizer dragster powered by Vita C Shot to slip past Torrence’s 3.764 at 321.81. After advancing to a pair of final rounds this season. Both had great identical reaction times of .035, but Ashley had just enough at the finish line to deny Torrence his 50th career win in Top Fuel.

Capps strengthened his Funny Car championship chances with a standout performance in the final round against Don Schumacher Racing teammate Matt Hagan, picking up the holeshot victory with his run of 3.930 at 326.87 in his 11,000-hp NAPA Auto Parts Dodge Charger SRT Hellcat Redeye. Hagan, the defending world champ, went a quicker 3.919 at 328.78 but Capps pulled off a strong .042 reaction time to get the win and make amends for his rough outing on the starting line two weeks ago in St. Louis.

Smith moved into the points lead to finish off a dominating weekend in Pro Stock Motorcycle, beating Hector Arana Jr. in the final round. Arana left too soon on the starting line, while Smith put together a run of 6.839 at 199.08 on his Denso Auto Parts/Stockseth/Matt Smith Racing EBR. Smith also had the quickest run in the class in each round of eliminations, moving into the points lead where he now holds an eight-point advantage over Steve Johnson with three Pro Stock Motorcycle races remaining. 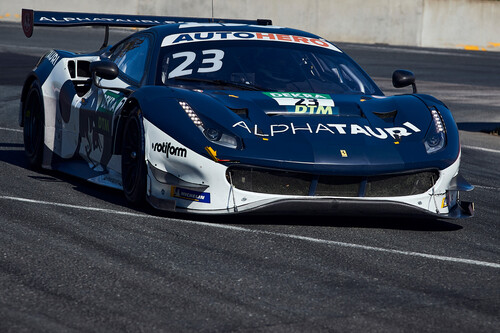 Red Bull AlphaTauri AF Corse wrapped up the 2021 DTM team title at the eighth and final stop around the Norisring track in Germany as Liam Lawson just missed out on the drivers’ title. Red Bull AlphaTauri AF Corse headed into the weekend with a healthy lead in the team standings and they wrapped up the 2021 title, thanks to the Saturday race one result as Lawson finished third and new teammate Nick Cassidy banked fifth to secure an impressive trophy.

German Maximilian Götz’s victory on Saturday closed his deficit to Lawson at the top of the driver standings with Lawson claiming pole on Sunday morning for the final race of a the season. However, Lawson’s closest rival Kelvin van der Linde of South Africa took his Red Bull liveried #30 Ferrari 488 GT3 Evo 2020 car out on the first turn of the first lap after braking too late. Despite being able to continue with a severely damaged car to finish 18th, the crash ultimately cost Lawson the 2021 Drivers’ Championship trophy as Götz won the second race and title by just three points. Lawson ended his DTM debut season in second place overall thanks to three wins, four pole positions and 10 podiums that did earn him the Junior title.

X.CELERATED has announced the formation of the “XR Super Series,” a 20-race sanctioned schedule of dirt racing events across the U.S. beginning in 2022. XR Events began an initiative in 2021 to produce and promote major dirt-racing events for Super Late Models featuring class superstars and backed by high-paying purses and financial bonuses. In 2022, XR will take that effort a step further with a full slate of 20 race dates under the XR Super Series (XRSS) umbrella.

Highlighting the schedule will be the $100,000 eight-race points championship at the Karl Kustoms Bristol Dirt Nationals and four $50,000-to-win main event races (Charlotte; Belleville, Texas; and Las Vegas). All event feature races pay a minimum of $25,000 to win. For more information, visit racexr.com.