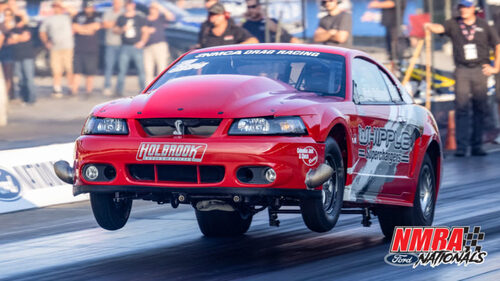 VP Racing Madditives Street Outlaw: John Urist dispatched Alan Felts in the third round en route to the final, where he ultimately lost to Earl Stanley, 4.46 to 4.48.

Edelbrock Renegade: In the final round, Chris Holbrook took the win over Eric Bardekoff in an all-Whipple-supercharged final battle.

JDM Engineering Limited Street: Samantha Moore met points leader and defending champion Bill Putnam in the final round, where Putnam took the starting line advantage, which earned him the win at the stripe after both drivers recorded identical 8.332 runs.

G-Force Transmissions Coyote Stock: Shane Stymiest charged through the field until he met Charlie Booze Jr. in the final round. Both reactions times were close, but Stymiest raced ahead to the win with a 9.83 over Booze’s 11.84 run.

Richmond Gear Factory Stock: Mike Bowen met Mark Anderson in the final round of competition. There, Anderson got a slight jump at the start, but slowed, allowing Bowen to take the victory with a 10.21 pass.

ARP Open Comp: The final round came down to Brayden Creamer and Woody Pack. Both drivers did their jobs well off the line, but it was Creamer who was victorious, pushing Pack to break out at the finish.

Detroit Locker Truck & Lightning: Robert Chuhran drove to the final round, where he fouled at the start against Amanda Saad, who went .002 on the tree and 10.209 on a 10.14 dial-in.

Fastest Street Car Magazine Ford Muscle: Mark Schiffner in his ’70 Ford Torino fought hard to get there, but took the easy win when Matthew Keiser in his ’68 Mustang went -.102 red at the start.

Mickey Thompson Street Car Challenge: Donato Sierchio faced Dave Liechty in the final round of competition, where Sierchio drove to the NMRA Winner’s Circle with a 7.637 run.

QA1 True Street: Scott Barker took the overall win in his ’66 Mustang with an 8.78 average, followed by True Street veteran Troy Eaton in the runner up spot with an 8.801. Matthew Ballard grabbed the 9-second award with a perfect 9.000 average, Jason Wolf collected the 10-second prize at 10.029 and Kevin McCotter was the 11-second winner with an 11.118 average. The 12-second win had to be decided by MPH, as Both Wade Whicker and John Cole averaged 12.004. Whicker had the speed to secure the win. Rodney Ward averaged 13.007 for the 13-second award, Darleen Simmons was the 14-second winner with a 14.042 average, and Belinda Moore took home the 15-second plaque with a 15.095 average.

TREMEC Stick Shift Shootout: In the final round, Bob Myers in his turbocharged, four-cylinder Mercury Capri was victorious over Andrew Lukanov in his ’03 Mustang Cobra.

The Capri Club of North America returned to the NMRA All-Ford World Finals. In the final round of competition, Chris Rolls grabbed the win after James Meredith broke out with a 9.609 on a 9.60 dial in at the top end.

The NMRA Finals played host to the RacePagesDigital.com Bracket Open. As the day came to a close, the final three racers, Bill Feckley, Stephen O’Neal, and Danny Scheele all opted to split the payout.

The Off-Road Motorsports Hall of Fame has announced the recipients of the 2021 Impact Awards in seven categories: Desert Racing, Short Course, Rock Sports, Industry, Advocate, MX|ATV and UTV. The 2021 Hall of Fame Impact Awards are presented by 4 Wheel Parts.

The honorees were selected from an extensive list of candidates who were considered for the Impact they made on the sport of off-road during 2020-2021. Candidates in competition categories must have won at least one race during the 2020-2021 seasons to be considered. The ORMHOF board of directors refined the list through a blind voting process, with the five candidates in each category receiving the most votes becoming this year's honorees.

Ballots were sent out by email on the morning of October 1 to 2020-2021 Hall of Fame members, as well as attendees who have purchased tickets online to this year's Induction & Awards Gala.

To become a voting member of the Hall of Fame and receive an Impact Award ballot to vote for this year's Voters Choice, join for $25 or more using the Join, Partner, or Donate tab at the top of the homepage at ormhof.org. Gala guests who purchase tickets online will also receive ballots. Ballots will be sent by email within 48 hours. Voting is limited to once per registered email address. Voting ends on Friday, October 29, at 5 p.m. (PDT). 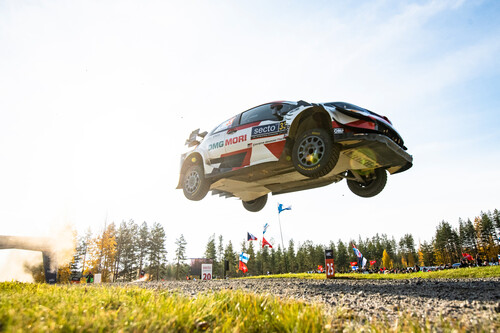 Elfyn Evans stormed to victory at Secto Automotive Rally Finland last Sunday afternoon to keep alive his hopes of a maiden FIA World Rally Championship title. A series of five back-to-back speed test wins on Friday night and Saturday morning propelled the Welshman from fifth to first. He survived pressure from Ott Tänak and Craig Breen across the rest of the rally to win by 14.1 seconds in a Toyota Yaris. With maximum points for winning the closing Wolf Power Stage, the Welshman slashed championship leader Sébastien Ogier’s advantage from 44 points to 24 with two rounds remaining. The WRC returns to asphalt for the penultimate round at RallyRACC Rally de España, October 14–17.

FIA World Rally Championship (after round 10 of 12)

NASCAR has announced the 2022 schedules for both the NASCAR Xfinity Series and NASCAR Camping World Truck Series. Both series will open the season on consecutive days at the “World Center of Racing,” Daytona International Speedway. The Camping World Truck Series gets underway on February 18, with the Xfinity Series kicking off its season on February 19. As announced earlier in the year, all three NASCAR national series seasons will culminate with NASCAR Championship Weekend at Phoenix Raceway, November 4–6. For the complete 2022 schedule for the NASCAR Xfinity Series, visit nascar.com/nascar-xfinity-series/2022/schedule. For the 2022 schedule for the NASCAR Camping World Truck Series, visit nascar.com/nascar-camping-world-truck-series/2021/schedule/.

Officials from the World of Outlaws Morton Buildings Late Model Series have announced the 2022 schedule. New multi-day events and an increased year-end point fund highlight next season’s campaign, as next season’s champion will take home an additional $25,000. The winner of the 2022 World of Outlaws Morton Buildings Late Model championship will earn a Series-high $125,000. The top-12 drivers in 2022 will see more than half a million dollars spread among them—each driver getting at least a $5,000 increase. The Series will visit The Rev in Monroe, Louisiana, for the first time next year, where a $20,000-to-win Feature caps off the two-night weekend, March 11–12. In 2022, the World of Outlaws Late Models will make its first appearance at Federated Auto Parts Raceway at I-55 since 2018. The Series will be joined by the DIRTcar Summer Nationals, June 24–25. A total of $20,000 will be on the line to finish the weekend, along with special bonuses expected through the field. For tickets and the schedule, visit worldofoutlaws.com/tix.

USAC will sanction the new series with a schedule comprising six road-course race weekends, most with tripleheader rounds, for a total of 16 to 18 races. Budgets are expected to be in the $120,000 to $150,000 range, and the series will be open to drivers as young as 14 years of age. For 2022, the Ligier JS chassis and HPD powerplant will be utilized with long-time series engine builder Elite Engines performing all new builds and rebuilds. Cooper Tires will develop a series-specific tire for the tripleheader events with two sets of tires allocated for each event weekend.

Officials with the Engine Performance Expo have announced the event will take place in two parts and feature an expanded number of segments. The first round will take place online from October 13–14, 2021. The second is set for January 13–14, 2022, and will offer the opportunity for 200 people to attend in person at Straub Technologies in Piney Flats, Tennessee.

More than 30 sessions across three days will cover the latest engine-building technologies, tools and techniques. In addition, there will be hands-on sessions focused on earning a living in the industry, including career paths and training, and best practices in building, growing and managing an engine-building business. The AERA Engine Builders Association, EFI University, and the School of Automotive Machinists and Technology are among those who will be holding educational sessions and demonstrations. Already confirmed are appearances by Joe Patelle, George Bryce, Mark Cronquist, Scooter Brothers, Keith & Jeff Dorton, Jon Kaase, Larry Clark, Joe Stef, and Warren and Kurt Johnson. For more information, visit engineperformanceexpo.com.