After going winless for five years, Funny Car veteran Tim Wilkerson now has two wins in the past three weeks, driving to the victory last Sunday at the DeWalt NHRA Carolina Nationals at zMAX Dragway. Josh Hart (Top Fuel), Kyle Koretsky (Pro Stock) and Angelle Sampey (Pro Stock Motorcycle) also picked up wins at the 15th of 20 races during the 2021 NHRA Camping World Drag Racing Series season and the second race in the Countdown to the Championship playoffs.

Taking on Cruz Pedregon in the final round, Wilkerson powered to a run of 3.927 seconds at 331.36 mph in his 11,000-hp Levin, Ray & Shoup Ford Shelby Mustang, picking up his second victory this month and the 22nd in his career. Wilkerson also moved to sixth in points, taking out three competitors in front of him in the standings en route to the win on Sunday.

In Top Fuel, Hart picked up the second victory in his career in just his eighth start, beating points leader Brittany Force on a holeshot in the final round. Hart went 3.770 at 324.12 in his 11,000-horsepower R&L Carriers dragster, which was enough to hold off Force’s 3.751 at 320.05.

Koretsky denied Greg Anderson a chance at history in Pro Stock and in the process picked up his first career win, going 6.629 at 207.27 in his Lucas Oil Chevrolet Camaro to beat Anderson’s 6.639 at 208.20 in a battle of KB Racing teammates.

After coming close on a couple recent occasions, Sampey broke through with the victory in the final round in Pro Stock Motorcycle, chasing down Joey Gladstone with a run of 6.861 at 196.62 on her Mission Foods/Vance & Hines Suzuki. Sampey was late on the starting line, but she had enough at the finish line to slip past Gladstone, earning her first win this season and 44th in her career. 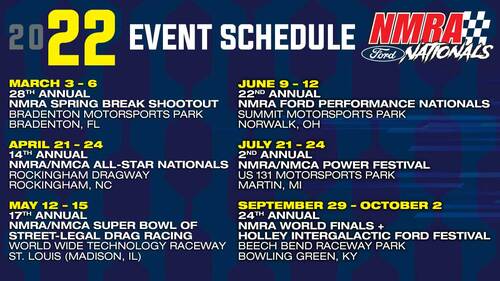 The NMRA officially kicks off the season with the Spring Break Shootout, held at Bradenton Motorsports Park. The second tour stop is Rockingham Dragway—the new home of the NMRA/NMCA All-Star Nationals in April. World Wide Technology Raceway, just outside of St. Louis, continues to host the NMRA/NMCA Super Bowl of Street-Legal Drag Racing extravaganza. A month later, the traveling Ford motorsport show returns once again to Summit Motorsports Park in Ohio with the Ford Performance Nationals. Then it’s back to US 131 Motorsports Park for the NMRA/NMCA Power Festival in July, followed by a break leading up to the NMRA World Finals + Holley Intergalactic Ford Festival. This annual festival includes the culmination of championship drag racing, street car shootouts, True Street, along with professional and amateur drifting, autocross extravaganza, an off-road course open to professionals and amateurs alike, and an all-Ford car show. For more information on the 2022 NMRA Ford Nationals, visit www.NMRAdigital.com.

IndyCar has announced a 17-race schedule for the 2022 NTT IndyCar Series season, which will feature unprecedented coverage on network television, an earlier start date, a “re-energized” summer of fan favorites and a turbocharged stretch run. The 2022 calendar is benchmarked by the 106th Indianapolis 500 presented by Gainbridge on Sunday, May 29. This year’s “500” on NBC was the most-watched edition of the race since the 100th Running in 2016.

In the United States, a record 14 events will air on the NBC broadcast network, one more than previously announced in July. It is the most single-season appearances on network television in IndyCar Series history. Two additional races will appear on USA Network while Peacock Premium, NBCUniversal’s streaming service, will provide live coverage of all 17 races in addition to practices and qualifying. For more information, visit indycar.com.

Liam Lawson sealed two podium finishes at Assen last weekend to claim the 2021 DTM championship lead with just two rounds left in the season. Despite carrying an extra 25 kg of success weight, Lawson was in contention for the win until the end of the race, which featured two safety car phases—his #30 ’20 Ferrari 488 GT3 Evo eventually coming home third with Red Bull AlphaTauri AF Corse teammate Alex Albon a DNF after being hit by a rival at the start of the race.

On Sunday, Lawson and Thai driver Albon locked out the second row of the grid to start third and fourth respectively and, despite initially losing a position from the start and running fourth, clever strategy in the pit stop put Lawson out in second place on the road. Lawson was then able to pull clear and pile pressure on race leader Lucas Auer (AUT) in the closing stages, but eventually had to settle for a close second place with Albon ending fifth in the #23 ’20 Ferrari 488 GT3 Evo.

Lawson has now finished in the top three on eight occasions already this season and he is now ahead of German Marco Wittmann by 10 points in the standings. Albon is 71 points behind Lawson in sixth with Red Bull AlphaTauri AF Corse now having 279 points to its name after six races to extend its lead in the team competition to 58 points with the 2021 season continuing from October 1-3 around the Hockenheim circuit in Germany.

NHRA officials have announced the 2022 NHRA Camping World Drag Racing Series schedule, which features the return of fan favorites such as the NHRA Arizona Nationals in Phoenix, the Virginia NHRA Nationals in Richmond, and the Flav-R-Pac NHRA Northwest Nationals in Seattle, which will serve as the traditional conclusion of the annual Western Swing.

The 2022 season kicks off in Pomona, California, for the Lucas Oil NHRA Winternationals presented by ProtectTheHarvest.com. For the first time in four seasons, the NHRA will host a specialty race amongst the stars of the NHRA Camping World Drag Racing Series nitro categories. Fans will be treated to two NHRA Allstar Shootout events in 2022, at the Amalie Motor Oil NHRA Gatornationals and the prestigious Dodge//SRT NHRA US Nationals over Labor Day weekend. Then is the NHRA Countdown to the Championship playoffs leading up to the NHRA Camping World Drag Racing Series world title.

Batchkis Takes the Win on the Streets of Long Beach; Aasbo Leads Formula DRIFT Points With One Round to Go

A big weekend for the Papadakis Racing Toyota team in Long Beach, California, saw Fredric Aasbo and the Rockstar Energy Toyota GR Supra earn a second place result and move into the Formula DRIFT series points lead ahead of next month’s season finale in Irwindale, California. The result also vaults Toyota to the top of the Auto Cup standings, while partner Nitto Tire extends its lead in the Tire Cup rankings. Aurimas Bakchis in the Falken Tire/Feal Suspension Nissan S15 claimed his first win since the opening round at Michelin Raceway Road Atlanta and pulled himself to within 43 points of the championship leader.

As the series approaches its season finale in Irwindale, California, October 22-23, Aasbo leads the standings by 19 points over second-place challenger Chelsea DeNofa. The series awards 100 points for an event win and Ryan Tuerck is sixth and still mathematically in the chase. For more information, visit the Formula DRIFT website.

NASCAR has announced the 2022 NASCAR Cup Series schedule. The slate spans 39 total events, including the previously announced Clash, set for February 6, at the Los Angeles Memorial Coliseum for the first time in series history.

The NASCAR Cup Series will visit another track for the first time at World Wide Technology Raceway just outside St. Louis, on June 5. In another move, Homestead-Miami Speedway will return to the playoff schedule. The 1.5-mile destination track will host the second of three Round of 8 races on October 23. In addition, Texas (September 25) and Las Vegas (October 16) will swap dates and lead off the Round of 12 and Round of 8, respectively. In addition, Kansas will move up in the Playoffs schedule, becoming the second race in the Round of 16 (September 11).

The 2022 season will officially kick off with the Daytona 500 at Daytona International Speedway on Sunday, February 20, live on FOX—an event that will also host the regular season points race debut of the Next Gen race car. The Cup Series will then stop at Auto Club Speedway on February 27—the first time NASCAR will visit the high-speed two-mile oval in nearly two years—followed by Las Vegas Motor Speedway (March 6) and Phoenix Raceway (March 13).

The Bristol Dirt Race returns to the schedule, this time under the lights on Easter Sunday Night (April 17). The NASCAR Cup Series All-Star Race will also return to Texas Motor Speedway (May 22). For more information, and to view the complete schedule, visit www.nascar.com.