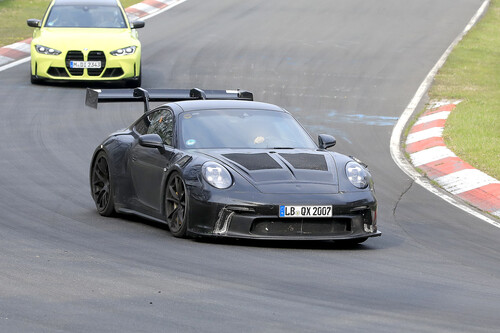 Yet another prototype of the 992 GT3 RS has been spotted at the German Nürburgring race circuit. There are multiple clues showing this to the Rennsport model.

For starters, the early development stage seems to fall in line with the life cycle of the 992, and the air extractors on the front wings have 3RS written all over them. Quite impressive is the super-sized rear wing, which seems more suitable for a race car than a street car. However, considering that the “standard” GT3 has been spotted testing with a wing that can easily rival that of the ex-generation GT3 RS, it would only be normal for the future 992 GT3 RS to pack this sort of downforce hardware.

The central exhaust tips are traditional for such a machine and these should be linked to a naturally aspirated engine—as the soundtrack of multiple “standard” GT3 testers has already confirmed, this will maintain an atmospheric engine, with a 4.0L flat-six delivering 500+ hp. As such, the RS model should deliver an output premium of at least 20 hp.

And while the GT3 will once again offer a manual transmission alongside its PDK (prototypes have shown that, this time around, the Touring will also offer both transmissions), the lap time dedication of the RS means there will be no manual for this model. 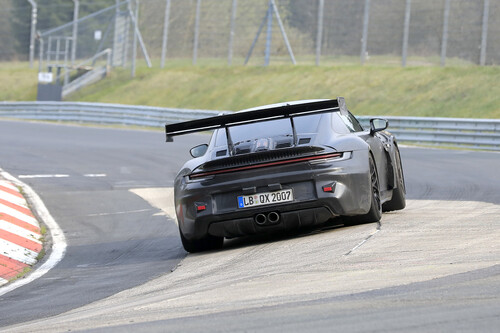