SEMA Hall of Fame Members Reflect on Their Inductions 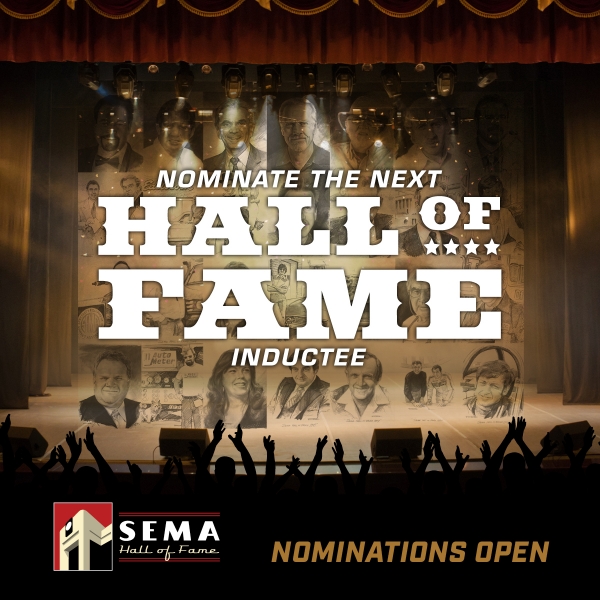 With 165 individuals inducted into the SEMA Hall of Fame since its inception in 1969, the SEMA Hall of Fame is a prestigious honor reserved for few. Its members represent top contributors, leaders and influencers in what is now a $44.6 billion industry and spans across all seven continents in the world.

Nominations for the next SEMA Hall of Fame member, which are currently being accepted at www.sema.org/hof, may seem daunting, but it’s critical for organizers to obtain recommendations and details from the industry at large.

For the members who are inducted each year, the SEMA Hall of Fame is a meaningful accolade to recognize their significant contributions.

Joe St. Lawrence, 2020 SEMA Hall of Fame Inductee, recalled getting the call informing him that he had been inducted. “I tried to act nonchalantly, but my heart was racing. I was shocked and I thought there were so many others more qualified. I could not believe it. It was the first time I ever experienced two emotions simultaneously -- joy and humility. When I got home, I started looking at all the names of those who make up the Hall of Fame. Those two emotions came back, and they do every time I’m reminded of the wonderful honor of being included in the SEMA Hall of Fame.”

Doug Evans, 2017 SEMA Hall of Fame inductee, notes: “To be honored as a hall of fame member by that same group of peers, including some of my idols, is simply amazing. It took my breath away then and it still does to this day.”

He continued by saying “I think by recognizing the pioneers of our industry it shows our young people getting started that they are no different than the people they are honoring. We are all passionate people doing this because we love the industry and we love the people who are in it. They can make a big difference in the future just like the pioneers did if they keep those fires lit and pursue their passions with that same unbridled dedication to each other and the industry.

St. Lawrence’s and Evans’ thoughts are echoed by 1991 SEMA Hall of Fame Inductee Carl Olson: “Recognizing industry pioneers is so important because the performance aftermarket is really a people-oriented industry that started from very humble beginnings and has mushroomed into a driving force in the American economy. Both the true pioneers and those who have continued to lead the industry forward need to be recognized for their efforts, both as recognition of where it started and how it has grown into the behemoth it has become.”

The number of new, young people getting involved with cars and the industry again is what 2002 SEMA Hall of Fame Inductee Harry Hibler is most excited for, stating that nominating someone for the SEMA Hall of Fame can help provide another goal for the new folks becoming involved in it to reach for.

“A lot of the people who started businesses early in the development of this industry did so out of necessity for their own needs not with the intention of building a successful company … Another large portion of them did so with the hope of building a successful company. Between all of them, a giant industry was created that has supplied jobs for thousands, given purpose to a lot of young people’s lives and provided enjoyment to most of them. However, if the younger generation involved today does not know how this all came about, the work/effort it took to make it happen and who the people behind all of it were, they cannot fully appreciate what they are involved in.”

To learn more about the SEMA Hall of Fame or view a list of inductees and their bios, visit www.semahof.com or contact Lindsay Bianco at lindsayb@sema.org or 909-978-6692.