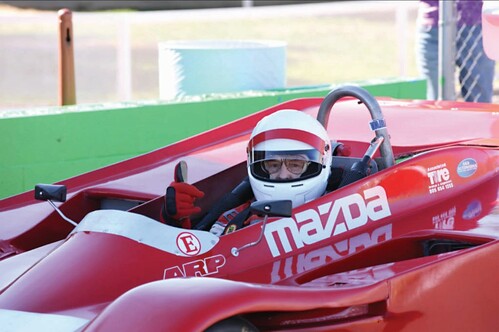 During his life, Goldstein represented many iconic brands, including Hooker Headers, where he created the famous Hooker heart logo and tag line “I love my Hooker Headers.”

In his earliest days, Goldstein, along with lifelong friend, Craig Breedlove, was a founding member and past president of the original all-Chevrolet club, “Chev’s of Venice.” Goldstein was a regular at Sagus, Santa Ana, San Fernando, and Lions drag strips, as well as on the Southern California dry lakes in his flathead-powered ’32 Coupe.

Always up for an adventure, Goldstein joined Breedlove’s Spirit of America land-speed record team as general manager, and was a contributor from Breedlove’s first attempt though his final attempt. Goldstein was once again by his friend’s side as general manager during the 1997 “Dual in the Desert,” where  Breedlove went head-to-head with Andy Green to see who would be the first to go supersonic on land.

Goldstein was an active SEMA member for more than 30 years, and was one of the original group that came together at a Downey restaurant to create the Speed Equipment Manufacturers Association. As general manager of the Spirit Equipment Company, he was a major participant at the first SEMA Show held at Dodger Stadium in Los Angeles.

Goldstein never strayed far from his street-racing roots, and was the executive vice president of the International Brotherhood of Street Racers. Together, Goldstein and club president Big Willie Robinson were instrumental in the founding of Brotherhood Raceway on Terminal Island—the first drag strip officially permitted in Los Angeles County.

Never one to shy away from the driver’s seat, between 1985 and 1990, Goldstein became a five-time SCCA Road Racing Champion, setting lap records at Riverside, Willow Springs, Firebird, and Las Vegas Raceways in his beloved March sports racer.

A memorial will be held at Willow Springs Raceway; date to be announced. Donations may be made to the SEMA Memorial Scholarship Fund in memory of Stan Goldstein.