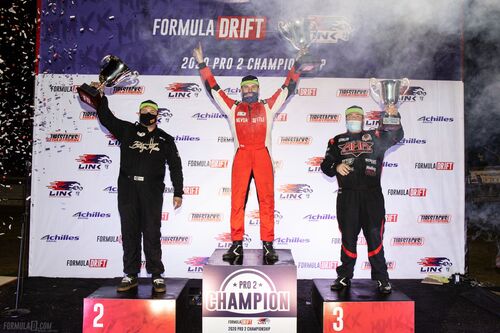 Formula DRIFT has announced the evolution of the Link ECU PRO2 Championship. With a multi-year plan to roll out new technical regulations and enhancements for competitors, Formula DRIFT, in partnership with Link ECU, will transform the PRO2 series into the Formula DRIFT Link ECU PROSPEC Championship, effective immediately. The goal of the PROSPEC category over the next few seasons is to provide an increasingly competitive environment and greater exposure for teams entering Formula DRIFT. It will also continue to focus on sustainability and cost containment. As first steps for the 2021 season, PROSPEC qualifying and competition days to coincide with Formula DRIFT PRO qualifying and competition, designed to create a better spectacle for fans. Furthermore, PROSPEC drivers will be added to fan engagement activities, such as driver autograph signing (in accordance with COVID-19 protocols). PROSPEC qualifying and competition will be promoted and broadcast across all Formula DRIFT channels, including the Livestream coverage.

The NMCA Muscle Car Nationals has announced a three-year contract with Chevrolet Performance. The deal includes Chevrolet Performance-sponsored integration of LSX-based categories into the NMCA championship drag racing program, the 15th annual LSX Shootout (World Wide Technology Raceway, May 13-16), the third annual COPO Camaro Shootout (Summit Motorsports Park, August 26-29), and a presenting sponsorship of the NMCA World Street Finals at Lucas Oil Raceway, September 23-26. For the first time-ever the LS/LT-based categories will be full-time NMCA championships categories competing at all six nationals events. Chevrolet Performance and its official host dealer, Scoggin-Dickey Parts Center, will continue celebrating the top-3 in those categories with a Champions Dinner during the PRI Show in December.

The LSX Shootout moves to a new home at World Wide Technology Raceway, located just outside of St. Louis in Madison, Illinois. It runs concurrently with the NMRA/NMCA Super Bowl of Street-Legal Drag Racing, May 13-16. The COPO Camaro Shootout returns to Summit Motorsport Park in Norwalk, Ohio, and Chevrolet Performance is the presenting sponsor of the season-ending NMCA World Street Finals held at Lucas Oil Raceway, September 23-26.

A total of 309 midget drivers were on hand for the Lucas Oil Chili Bowl Nationals presented by General Tire at the Tulsa Expo Raceway, located inside the River Spirit Expo Center in Tulsa, Oklahoma. The 35th annual event took place over the weekend and helped kick off the 2021 racing season. Kyle Larson fended off Justin Grant and 2017-2018 champion Christopher Bell to secure the coveted Golden Driller trophy, his second in two years. Fans were allowed to attend the Chili Bowl in person, although organizers announced a limit of 25% capacity back in November. Officials are already organizing next year's event—the 36th annual Lucas Oil Chili Bowl Nationals presented by General Tire—which is scheduled to take place January 10-15, 2022. For more information, visit www.chilibowl.com.

The Super DIRTcar Series Big Block Modified 2021 schedule has been released, which features several premier race tracks in the eastern United States. The season begins in February at Volusia Speedway Park for the DIRTcar Nationals, which celebrates its 50th anniversary this year. Crown Jewel events include the $50,000-to-win Billy Whittaker Cars 200 and the $25,500-to-win Mr. DIRT Track USA. A $10,000-to-win doubleheader at Bristol also joins the schedule along with the two-race Cavalcade Weekend at Weedsport Speedway. Fans can stream every Super DIRTcar Series event with the DIRTVision Fast-Pass. For the complete schedule visit the Super DIRTcar Series website.

Formula DRIFT has announced a full schedule for the 2021 season, which kicks off in May at Michelin Raceway Road Atlanta. The traditional season opener on the streets of Long Beach has been moved to September in conjunction with the rescheduled Acura Grand Prix of Long Beach. The race will serve as a special, invitational event. Two fresh venues—the new, purpose-built Englishtown Raceway Park in New Jersey and Lake Erie Speedway in Pennsylvania—have been added to the familiar six tracks, including the season finale at Irwindale Speedway in Southern California. Races will be available to stream online at www.formulad.com and on Formula DRIFT social media and YouTube channels. For the complete schedule, visit the Formula DRIFT website.

NHRA and Wild Horse Pass Motorsports Park have made the decision to not host the 2021 NHRA Arizona Nationals, leaving an opening on this season's schedule. The ongoing COVID-19 restrictions due to the public health situation in the Phoenix area and the state of Arizona were taken into account as part of the decision. The 2021 NHRA Camping World Drag Racing Series is set to begin March 11-14, in Gainesville, and currently includes 22 events at racetracks across the country.