Ocean Shipping Reform Act Signed Into Law: President Biden signed into law SEMA-supported legislation to improve ongoing supply-chain issues and backlogs at ports. The Ocean Shipping Reform Act was passed unanimously by the Senate and overwhelmingly by the House of Representatives. The bill strengthens the authority of the Federal Maritime Commission (FMC), which oversees international ocean shipping, to enforce against exploitative business practices and investigate fees charged by shipping companies. Shipping company invoices will need to include accurate information on a container’s availability date, port of discharge, free time, rates and contact information. The FMC will also establish a webpage for complaint submissions and maintain an office for dispute resolution services.

RPM Act: With members of Congress returning to Washington in September, now is the time to demand they pass the Recognizing the Protection of Motorsports Act (RPM Act), H.R. 3281 and S. 2736, before they leave town for the mid-term election. The RPM Act clarifies that it is legal to make emissions-related changes to convert a street vehicle into a dedicated race car under the Clean Air Act (CAA). The bill would also confirm that producing, marketing and installing racing equipment on track vehicles does not violate the CAA. The RPM Act enjoys strong bipartisan support in the 2021–2022 session of Congress, including more than 150 co-sponsors, but SEMA members and the racing community must turn up the pressure on lawmakers to pass the bill this fall.

Below are things you can do right now to help to pass the RPM Act:

IRS Raises Standard Mileage Rate: The Internal Revenue Service increased the standard business-mileage deduction from 58.5 cents per mile to 62.5 cents per mile for the remainder of 2022. While the rate is generally updated annually, the IRS adjusted the rate mid-year in response to rising gas prices. The change took effect July 1. The mileage calculation includes the cost of fuel, along with other vehicle fixed and variable operating expenses, such as depreciation, insurance, tires, etc. Companies and individuals who use their automobiles (including vans, pickups and panel trucks) for business have the option of using the standard rate in lieu of keeping records of their actual expenses.

NHTSA Updates Standard Reference Test Tire: The National Highway Traffic Safety Administration (NHTSA) issued a final rule to update the standard reference test tire (SRTT) used as a baseline tire to rate treadwear, braking traction, snow traction and evaluate pavement surface friction. The rule was necessary because the only manufacturer of the previously referenced SRTT ceased production of the tire. Referencing a new SRTT ensures the availability of a test tire for testing purposes. Under the final rule, ASTM E1136, ‘‘Standard Specification for P195/75R14 Radial Standard Reference Test Tire’’ (14-in. SRTT) will be replaced with ASTM F2493, Standard Specification for P225/60R16 (16-in. SRTT). The 16-in. SRTT is considered more representative of current tires because of its larger size, new material and design features that are more typical of modern passenger car tires.

Changes to California’s Prop 65 Short-Form Warnings Abandoned for Now: California’s Office of Environmental Health Hazard Assessment did not complete the regulatory process for its proposed amendments to the Proposition 65 short-form warning within the allotted time and allowed the rulemaking to lapse. The Office of Environmental Health Hazard Assessment stated it intends to start the regulatory process again with a new proposal to update the short-form warning label and will consider the comments on the previous proposal into this process. SEMA submitted comments opposing the initial proposal and the subsequent modifications, as the new regulations would have mandated that at least one chemical associated with cancer and/or one chemical known to be a carcinogen be identified on the short form. Prop 65 doesn’t stop anyone from selling their products regardless of what chemicals they contain. It simply requires consumer warning labels under certain circumstances. The current short-form warning does not identify a specific chemical(s) while the long-form warning requires identification of a specific chemical(s). 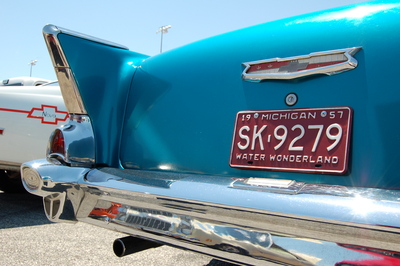 Michigan—Historic Vehicles: The Michigan House of Representatives passed SEMA-supported legislation to expand the usage of historic vehicles by allowing vehicles to be driven without restrictions between Memorial Day weekend and Labor Day weekend. The bill declares this time period as “participation in an exhibition.” Currently, historic vehicles may only be used in participation for club activities, exhibitions, tours, parades, and similar uses with the month of August declared as an exhibition period. The bill is pending in the Senate Transportation and Infrastructure Committee.

Alaska—License Plate: The Alaska legislature failed to pass prior to adjournment SEMA-supported legislation to allow the display of only a single, rear-mounted license plate for all passenger vehicles. Under current law, vehicles must display two license plates.

Iowa—Antique Vehicles: The Iowa legislature failed to pass prior to adjournment SEMA-supported legislation to reduce the registration fee/tax for older antique vehicles from 5% of the purchase price to 2%.

Iowa—License Plate: The Iowa legislature failed to pass prior to adjournment two SEMA-supported bills to allow certain vehicles to display a single license plate on the rear of the vehicle. Under one bill, eligible motor vehicles included those “registered as antiques or any vehicle that would require modifications including but not limited to adding or mounting hardware, drilling, or adding adhesives in order to secure a front registration plate.” Under the other bill, eligible motor vehicles included vintage (model year ’79 or older), reconstructed or specially-constructed vehicles built to resemble a vintage motor vehicle, and limited-production motor vehicles.

Minnesota—License Plate: The Minnesota legislature failed to pass prior to adjournment SEMA-supported legislation for the issuance of only a single, rear-mounted license plate for special-interest vehicles.

Missouri—Historic Vehicles: The Missouri legislature failed to pass prior to adjournment SEMA-supported legislation that would have allowed historic vehicles to be issued license plates without an annual mileage restriction. Current law limits historic vehicle owners to 1,000 mi. of driving for personal use per year.

New Jersey—License Plate: The New Jersey Senate introduced SEMA-supported legislation to allow the New Jersey Motor Vehicle Commission to issue newly created classic license plates for display on all vehicles. The new plates will resemble those issued between 1979 and 1991, featuring sand-yellow text on a blue background. The legislation awaits consideration in the Senate Transportation Committee.

South Carolina—Automotive Hobby Recognition: The South Carolina legislature failed to pass prior to adjournment SEMA-supported legislation to designate the automotive hobby as the official family-friendly pastime of the state, specifically the “restoration, exhibition, showing, and enjoyment of classic and antique motor vehicles.”

Vermont—Exhaust Noise: The Vermont legislature failed to pass prior to adjournment SEMA-model legislation to create a fair testing procedure for vehicles suspected of exhaust noise violations. The proposal would have implemented the Society of Automotive Engineers’ objective testing procedures for determining if a vehicle’s installed exhaust system is more than 95 decibels.

Vermont—Inspections: The Vermont legislature failed to pass prior to adjournment SEMA-supported legislation to require biennial safety and emissions inspection in lieu of the current annual obligation.

Vermont—License Plate: The Vermont legislature failed to pass prior to adjournment SEMA-supported legislation to require the display of only a single, rear-mounted license plate for all passenger vehicles with a registered weight of 10,000 lbs. or less.

Vermont—Window Tint: The Vermont legislature failed to pass prior to adjournment SEMA-supported legislation to allow window shading or tinting material on the side and vent windows to the left and right side of the driver.