Public-Private Effort Launched to Save the Bonneville Salt Flats 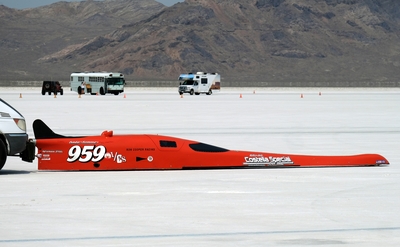 Hundreds of land-speed records have been set and broken by racers driving all types of two-, three- and four-wheeled vehicles. Photo courtesy: D.Lopez-FotoMundo America/Shutterstock.com

For more than 100 years, racers have descended upon the crystalline white salt remnants of the ancient lakebed that comprises the Bonneville Salt Flats in search of epic speeds. Not only does this unique landmark attract tourists, filmmaker and other commercial activity, but it also possesses rare physical qualities that make it the perfect venue for land-speed racing.

Despite being designated as a historic landmark, Bonneville is imperiled. Beginning in the ’60s, federal mining leases allowed salt to be transferred from Bonneville for potash extraction. Once processed, the remaining salt was not returned to Bonneville until 1997, and the amounts pumped in subsequent years have not made up for decades of losses.

SEMA has worked with the Save the Salt Coalition—a group of concerned racers, businesses and community members—to create the “Restore Bonneville” program. The goal is to gradually increase the yearly amount of salt brine pumped onto
Bonneville from an average of 300,000 tons per year to more than 1 million tons per year. SEMA and the racing community have joined forces with the U.S. Bureau of Land Management (BLM), the Utah Department of Natural Resources (DNR), the Utah Geological Survey, and Intrepid Potash Inc. in the collaborative restoration effort.

The restoration program is managed by DNR in conjunction with the BLM, and it is operated by Intrepid Potash. In working with Intrepid Potash, the volume of salt laid down on Bonneville will be increased by updating and improving the efficiency of the current pumping infrastructure and water conservation efforts, which includes rebuilding water wells, covering ditches and installing new pipes and pumps. Great efforts to use water more efficiently will help achieve the goal to increase the volume of salt returned to the salt flats.

More than $1.2 million in federal and Utah state funds were released last year to start the ambitious restoration effort. During the summer of 2021, a new water well was installed along with equipment to measure water evaporation rates and collect scientific data. The data will seek to identify the best ways to take advantage of the salt laydown and study the effects on the salt crust and underlying brine aquifer. For example, the program will consider ways to contain the salt within the large pumping area with dykes or berms.

Stakeholders are now pursuing projects to continue increasing the volume of salt being pumped in 2022 and beyond. While the fight to save the Bonneville Salt Flats is far from over, this program represents a tangible step toward “saving the salt” and protecting the future of racing at Bonneville. If you’re looking for a way to help, financial contributions to the program from the racing community are gratefully accepted at www.savethesalt.org.

Bonneville’s hard salt provides a cool surface that doesn’t overheat tires as vehicles hit mind-boggling speeds. Hundreds of land-speed records have been set and broken by racers driving all types of two-, three- and four-wheeled vehicles. Speed Week is the marquee event, drawing large crowds of racers and spectators nearly every August since 1949. Bonneville also has a long history of being nature’s test track for equipment produced by SEMA and PRI members.

Bonneville serves another important role as a crucial resource for potash used primarily in fertilizers. To obtain potash, salt brine is collected in large solar evaporation ponds from which potash is separated out and processed. The remaining salt is stored and may then be returned to the Salt Flats as salt brine.

Beginning in the ’60s, the U.S. Bureau of Land Management, which manages the land, issued leases to the north of Interstate 80, where motorsports racing and other recreational activities take place, allowing salt brine to be collected in open ditches for commercial potash processing. The mine operator began pumping the processed salt back onto Bonneville in 1997 as part of a pilot project SEMA helped create, but it has not kept pace with the loss of salt over previous decades.

In the ’60s, the racing venue at Bonneville was more than 13 mi. in length, but there is now 8 mi. or less that can be used for competition. SEMA and the racing community are now pursuing a program to dramatically increase the volume of salt returned to Bonneville.