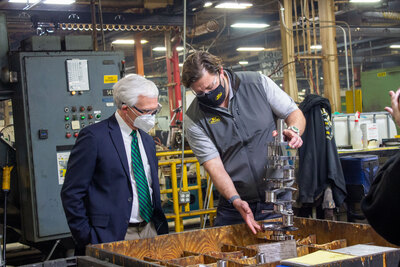 “It’s not about what you know, it’s about who you know.” We’ve all heard this axiom more times than we can count, but I’ve got a better one for you. “It’s not who you know, it’s who knows you.” This is SEMA’s unofficial credo when it comes to advocating for the interests of our member companies in Washington, D.C. Callies Performance Products, like many SEMA members, has developed a strong relationship with and is well known by its lawmakers. Callies hosted U.S. Representative Bob Latta (R-OH) for a tour of the company’s Fostoria, Ohio, headquarters earlier this year, the Congressman’s second time visiting the company.

Callies Performance Products manufactures high-performance crankshafts, connecting rods, and camshaft cores using 3-D modeling and computer-aided tool path creation. The race market is a core part of the company’s business with its products sold for drag, dirt track, Circle Track and sprint car racing. Callies makes products for the truck, boat and airplane markets as well, although racing is the lifeblood of the company. However, this wasn’t always the case.

Rick Norton, the owner of Callies Performance Products, founded Norton Manufacturing Company in the ’70s. The business evolved from a tool-and-die shop to manufacturing crankshafts for the OE market into producing its own products for racing. With the change in business came a strategic name change. One of the Norton Manufacturing Company’s customers, John Callies, ran Pontiac’s motorsports division. Rick looks back fondly on meeting John for the first time at the SEMA Show in the ’80s where he offered him the job of running the high-performance side of the business. John was well known and respected in the racing industry, so Rick decided it was best to call the business Callies Performance Products and never looked back.

Callies has been producing crankshafts since 1989. The company’s leadership takes pride in the fact that Callies designs all its own products in addition to doing the machining and inspection.

Heath Norton, vice president of Callies Performance Products, provided Rep. Latta with a tour of the company’s 100,000-sq.-ft. manufacturing facility where the Congressman had a chance to interact with the company’s employees and watch them machine, assemble and inspect products for the track.

“Manufacturing is key to Ohio’s Fifth District,” said Rep. Latta. “A great example of manufacturing in the district is the Callies Performance facility where they are able to manufacture various products using high-end technology, including 3-D modeling and computer-aided tool path creation. It was impressive to see these innovations firsthand during my visit.”

The congressman was excited to discuss the most pressing issues facing Callies and the motorsports parts industry, including the Recognizing the Protection of Motorsports Act (RPM Act), tariffs, the ability to hire workers, and federal policy proposals to incentivize electric vehicles. Rep. Latta is a co-sponsor of the RPM Act and a strong supporter of the legislation, volunteering to work with House Energy & Commerce Committee leadership to pass the bill.

“With every site visit I have the opportunity to participate in, I always ask if there are any legislative priorities that the companies would like for their Representative to focus on. During my visit at Callies, they emphasized the importance of the Recognizing the Protection of Motorsports Act. I am a proud co-sponsor of this bill because it would allow motorsports to legally continue by clarifying that the Clean Air Act permits street vehicles to be converted into dedicated race cars.” 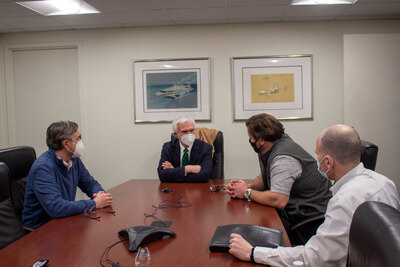 Rep. Latta represents Ohio’s Fifth Congressional District, which includes the northwest and west-central parts of the Buckeye State. The congressman is passionate about advancing policies that further economic prosperity and job creation, as his top priorities include balancing the budget, maintaining a strong national defense and implementing commonsense government reforms. Rep. Latta is also a member of the SEMA-supported Congressional Automotive Performance Caucus.

“We are fortunate to have SEMA and PRI represent manufacturers, engine builders and racers to protect our source of livelihood,” said Heath Norton. “We strive to offer value-based products that support a safe family-friendly sport. It’s important that we pass the RPM Act to preserve our industry, which is an economic driver in many communities and provides hands-on STEM education to the youth of America. Thank you, Rep. Latta, for visiting Callies and for all you are doing to fight to protect manufacturing in America.”

Rep. Latta’s recent visit to Callies was significant because it provided a chance for the company’s leadership and employees to update the Congressman on the current challenges facing the industry, and to discuss the actions that the federal government is taking that impact its business. The visit also reinforced the important role that aftermarket businesses play in Rep. Latta’s district, which has a rich manufacturing history.

For more information on planning your own Congressional District Site Visit, contact Eric Snyder in the SEMA Government Affairs office at erics@sema.org.