Built Through Industry Partnerships, the Car Is Classic, but the Drive Is Modern

Keith Urban couldn’t help but sit in the Mustang as he thanked all the people involved with the project.

Vehicle reveals are always special events at the SEMA Show, with car covers flying off throughout Show Week. Among the many exciting builds for the 2021 Show was a ’69 Mustang restomod project owned by four-time Grammy award winner and multi-platinum artist Keith Urban, and built by the SEMA Garage. The build was made possible through a partnership with Ford Motor Company, Jay Leno and numerous SEMA-member companies.

“A build starts with various design ideas, led by iterations and reviews to really determine what you are after,” SEMA Garage Engineer Luis Morales said. “Understanding the end goal of the car is the main thing.”

The front facade of the vehicle is aggressive. Stratasys 3D printed the grille that was engineered by Morales, who worked with the design team at Ford. The design took inspiration from the ’21 Mustang Mach 1. Dynacorn provided the exterior body paneling for the restoration, and Santini Paint and Body received paint from PPG for the one-off color. The custom-formulated Mariana Blue paint reflected brilliantly as thousands of Show goers watched the cover come off and Urban got his first look at the car in more than two years.

“When the Ford Design Studio was asked to be involved in the project, they had just put the finishing touches on the ’21 Mustang Mach 1, and it was top of mind when they were looking at some of the early images of Keith’s car,” said Ford Future Electric Vehicles, Vehicle Platform Director Dave Pericak. “Specifically, the completely new upper grille design, air dam and wheels were some of the key signature elements that you will see have a direct tie to the 2021 Mach 1.”

Carbon-fiber accents can be found all over the car, thanks to Anvil Auto. The look is brought together by Forgeline wheels that took some design cues from the ’21 Mach 1.

Beneath the hood, which is held up by CVF Racing billet hood shock absorbers, lies a 5.0L Coyote engine with a Roush supercharger and a K&N air intake. With the newfound power came a 10R80 10-speed transmission from Ford and a new driveshaft from Inland Empire Driveline.

“This build showcases some of our most iconic Ford Performance parts like the Coyote V8 crate engine and how using new technologies like 3-D printing—as we used for the front grille—the sky’s the limit,” Pericak said. “By bringing these parts and technologies together on the Keith Urban Mustang project, the team was able to be demonstrate how a truly remarkable, no-compromise vehicle could be built.”

The build team tackled the suspension by installing parts that provide a smooth ride and great handling whether at the track or taking a drive downtown. Heidts’ Pro-G complete front and rear subframes and suspension made the vehicle perform like a sports car, with the triple adjustable dampers from Bilstein bringing it altogether. One of the key features on the vehicle is the subframe kit, which allows for an all-around independent suspension, Morales said. The Mustang also runs Wilwood’s six-piston disc brakes in the front and four-piston discs in the rear.

Aeromotive provided the fuel system to handle the upgraded powertrain, and Vintage Air included the AC/heating unit to maintain the interior comfort, further enhanced with DEI heat and soundproofing. Dyme PSI fabricated the custom fuel and cooling hoses, while C&R Racing provided the complete cooling package. The build also features custom Borla headers and exhaust, paired nicely with the components under the floorpan.

“The Mustang is a car that exemplifies what all enthusiasts desire—performance, iconic design and the ability to personalize, which is what the SEMA Show is all about,” Pericak said. “Of course, this car needed a lot of help and working with the folks at SEMA Garage, Ford Design and the Ford Performance team, we were able to create a work of automotive art worthy of the stature Keith Urban brings to the car and worthy to be a centerpiece project for the SEMA Show itself.”

The interior is just as unique as the rest of the build. Distinctive Industries handled the upholstery, while Holley/Drake Automotive and Daniel Carpenter took care of the rest. The modern drivability is most obvious from the electric steering system provided by EPAS Performance. BCR Motorsports wired all of the electronics, including the instrument panel provided by Dakota Digital. 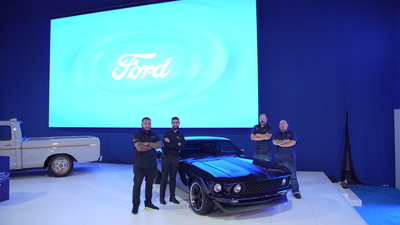 (From left) Wesley Simpkins, Luis Morales, Gary Pis and Joseph Moreno led the charge at the SEMA Garage to tackle Keith Urban’s ’69 Mustang, with the help of SEMA-member companies.

The efforts of many SEMA-member companies and the SEMA Garage came together for this build, which resulted in this beautiful restomod. The SEMA Garage expressed thanks to Ford Motor Company and all the SEMA-member manufacturer partners that brought the vehicle’s limitless possibilities to life.

“I really don’t have words for it,” said Urban. “I think the whole team has done the most miraculous job on taking on something that probably should’ve been scrapped.”