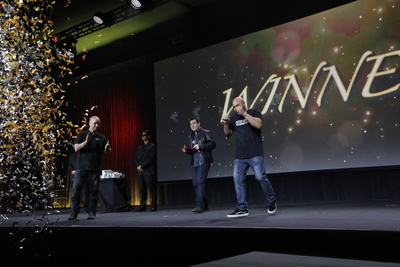 The night’s theme for 2021 was “Unleash Your Greatness,” with automotive television and podcast personality Kevin Oeste and motorsports announcer Jarod DeAnda emceeing the November 4 gathering at the Westgate Las Vegas Resort & Casino. 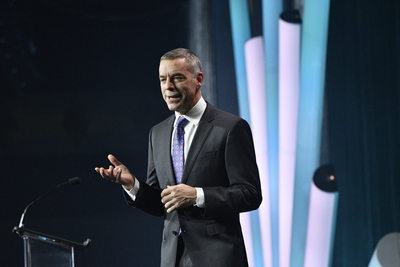 The first in-person Industry Awards Banquet in two years, the gala drew 2,500 automotive icons, professionals, supporters and celebrities. Comedian Adam Ferrara served up the main entertainment and additionally hosted the big onstage finale to the SEMA Launch Pad competition, which was recorded for later TV broadcast. The final round saw Tom Sawarynski of Off-Road Research and Dustin Woolf of Woolf Pack Racing delivering their product “elevator pitches” to the audience, which then selected Woolf as the 2021 Launch Pad winner. (See p. 74 for an in-depth look at the Launch Pad
competition.)

Of course, the evening’s central focus was the presentation of industry awards across a variety of categories, including Gen-III Innovator of the Year, Warehouse Distributor of the Year, Manufacturer of the Year and SEMA Person of the Year. There were also salutes to SEMA 2021 Hall of Fame inductees Carl Schiefer, Rick Love, Bob Moore and Jessi Combs. 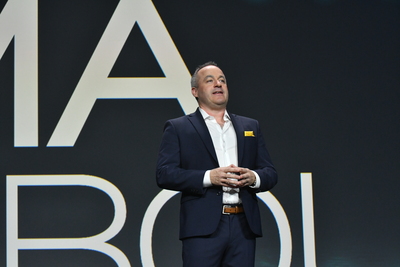 SEMA Chairman of the Board James Lawrence

The evening’s many honorees are featured in these pages, with Sara Morosan of LGE-CTS Motorsports, recipient of the SEMA Person of the Year award, set to be profiled separately in the February issue of SEMA News.

Following musical performances by Patrick & The LV Band and a stirring delivery of the national anthem by the Voices of Service choral group, SEMA President and CEO Chris Kersting (above) addressed the banqueters. Kersting touched on the tremendous evolutions reshaping the industry.

“COVID has forced us to experience a huge amount of change,” he said. “That’s probably a good thing, because our industry and the world around us are changing faster than ever before—and in some important ways. We’re going to need to embrace change to be able to grow and thrive.”

Kersting surveyed industry strides in performance, zero-emissions and electrification technologies, youth engagement, and political outreach. Citing several examples of SEMA members working to bring innovations about, he concluded: “So there you have some great inspiration. And we can all ask ourselves, ‘How can I be a change agent, a leader toward a successful future?’ I can’t think of a better way than being a leader for change.”

Revving Up the Industry

Taking the stage, SEMA Chairman of the Board James Lawrence (above) delivered an address celebrating industry greatness, grit and determination.

“We are so blessed to be here at the SEMA Show,” Lawrence said. “Many times over the last two years, the idea of getting our industry together again seemed so far away. It’s so simple, but tonight we really should celebrate just being together, being able to talk about cars, trucks, off-road engines and drag racing, [and] who has the coolest new parts and who created the most awesome new build.”

Commenting on the transformative point at which the industry finds itself, Lawrence observed, “In many ways, automotive performance and technology have never seen more greatness.” But, he added, the industry currently faces a number of challenges, such as misguided regulations, technological and societal changes, and other market pressures. Nonetheless, Lawrence expressed confidence in SEMA’s ability to race toward the future, mobilize consumer enthusiasm, and further revolutionize the automotive industry.

“The car is our life. It’s our family. It’s in our blood,” he said to applause.

Kersting led off the evening’s award presentations with a tribute to the Tire Industry Association (TIA).

For 25 years, TIA and SEMA have partnered to present the Global Tire Expo at the SEMA Show. In addition, TIA recently marked its 100th anniversary, while TIA CEO Roy Littlefield (pictured speaking above) announced his retirement after 40 years of service to the tire industry. In gratitude for TIA’s many industry contributions, Kersting welcomed Littlefield to the stage along with TIA Board Secretary Keith Jarmen to receive the SEMA President’s Service Award.

As the evening progressed, the accolades for other individuals, innovators and companies came one upon the other. 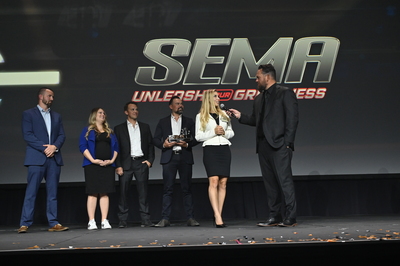 Moreover, under the supervision of Tiffanie Hartenstein, the company’s CEO and co-founder, Oracle Lighting has seen 10 sustained years of growth, achieving nine appearances on Inc. magazine’s 500/5000 list of the nation’s fastest-growing small businesses.

Tiffanie Hartenstein (above, second right) accepted the award on the company’s behalf. Runners up in the manufacturer’s category were CSF Racing & High Performance and KW Automotive. 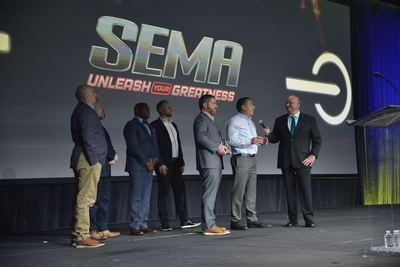 The SEMA Warehouse Distributor (WD) of the Year award recognizes a WD that stands out through operational excellence, industry involvement and developmental support to clients and staff. Outstanding customer service and expert product knowledge are also key considerations.

With three U.S. distribution centers, Turn 14 Distribution boasts ground shipping to 45% of the American population in one day, and 100% within two days. In addition, the company has stepped up its excellence in sales training and support programs to its customers throughout the COVID-19 pandemic. Turn 14 also continues to set new benchmarks for technology, strategy and disseminating important manufacturer info to improve the standards of the distribution model.

Accepting the award was Turn 14 CEO Jon Pulli. Runners up in the category were Keystone Automotive and Meyer Distributing. 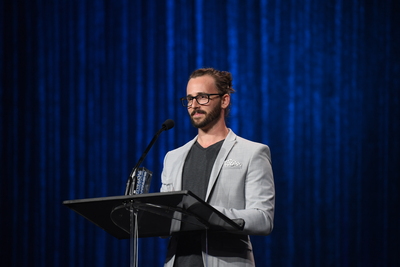 The award for Gen-III Innovator of the Year honors an individual under 40 who pushes limits and boundaries to propel the industry forward.

Matt Kossoff (above) literally started in his basement while still in high school, inventing the world’s first commercially available projector retrofit lighting product. Realizing that the enthusiast world is built around people, he then created an online community to share his products and ideas and spark excitement among consumers. That led to acquisitions of the largest lighting-centric message forum, Facebook group and YouTube channel.

Today Kossoff is the chief product officer of the company he built: Driven Lighting Group. The company has grown into the aftermarket’s largest lighting company and continues to advance the safety and output performance of lighting. 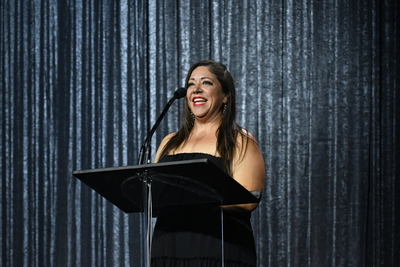 Sara Morosan of LGE-CTS Motorsports was named SEMA Person of the Year, one of the association’s most prestigious honors. She will be profiled in the February 2021 edition of SEMA News. 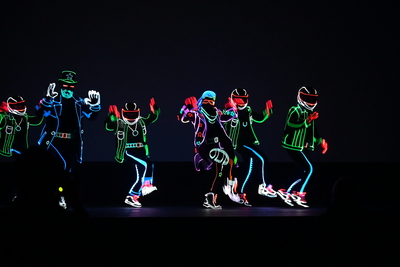 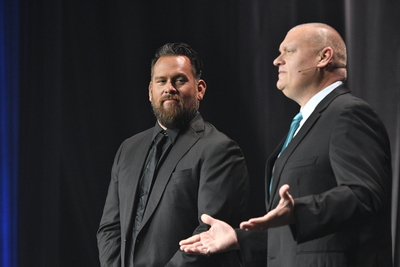 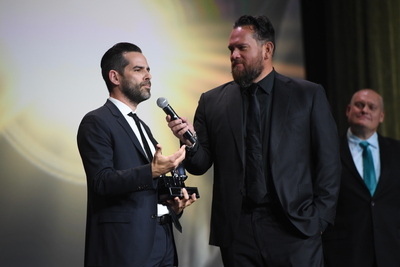 Among the 2021 SEMA Hall of Fame inductees was the late Carl Schiefer, founder of Schiefer Media. Schiefer’s son James (left) accepted the banquet honors on his father’s behalf. 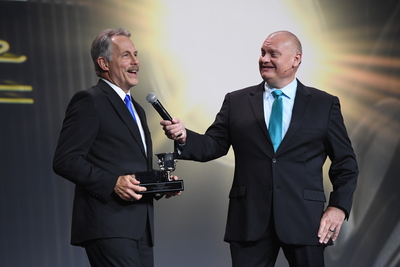 SEMA 2021 Hall of Famer Rick Love (left) is well known for his passion for cars and his tireless advocacy for the association, its members and, notably, its car builders. 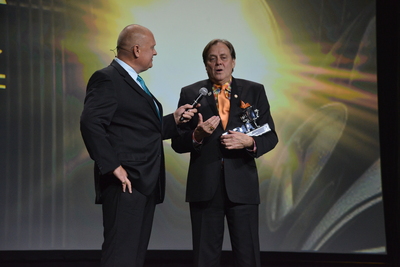 Also a 2021 Hall of Fame inductee, Bob Moore (right) was feted for his pioneering role in industry data, radically transforming how the industry markets product. 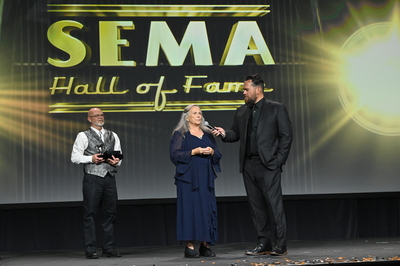 During the industry banquet, key honorees of several SEMA councils and networks were also recognized for their outstanding industry contributions. Council and network award recipients at the 2021 SEMA Show included: