Battle of the Builders 2021 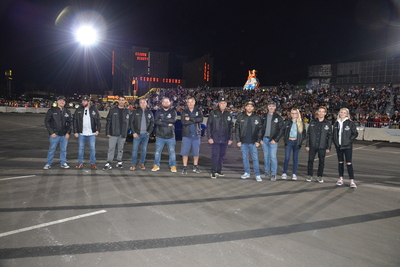 The Top 12 finalists for the 2021 Battle of the Builders are pictured here at SEMA Ignited, the SEMA Show’s annual after-hours party. The competition will be aired on A+E Network’s FYI and History Channel’s Drive block on Sunday, January 23, 2022, at 9:00 a.m. EST.

Robert Matranga of Irvine, California, garnered top honors at the eighth annual SEMA Battle of the Builders (BOTB) competition at the 2021 SEMA Show, held November 2–5 in Las Vegas. The announcement was made at the start of SEMA Ignited, the official SEMA Show after-party designed to celebrate the builders and showcase products from the Show.

For 2021, a Tri-Five Chevy beat out close to 250 entrants in the internationally recognized competition. The top four finalists for 2021 were Matranga with his ’55 Chevrolet Bel Air (hot rod category); Bryan Thompson with a ’34 Ford Pickup (truck/off-road); Eddie Pettus and his ’61 Austin Healey Sprite (sport compact); and Young Guns winner Dayton Jacobson with his ’00 Chevrolet S10. Each builder was recognized with a trophy in his respective class. 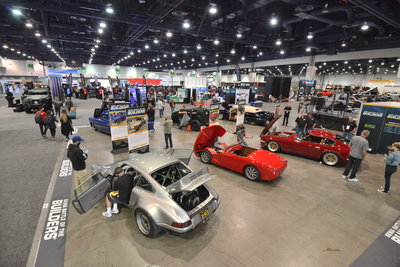 The BOTB finalists’ vehicles were on display throughout SEMA Show week inside North Hall at the Las Vegas Convention Center.

The four finalists for this year’s competition will be highlighted along with other featured builders in a new TV special, “SEMA: Battle of the Builders,” scheduled to debut on A+E Network’s FYI and History’s Drive block on Sunday, January 23, 2022 at 9:00 a.m. EST. Check your local station listings for the latest updates.

The 2021 SEMA Battle of the Builders competition included submissions from seasoned builders as well as new customizers representing an elite group of individuals who demonstrated extreme talent, creativity and craftsmanship in modifying cars, trucks and SUVs. The Young Guns category (builders age 27 years and younger) continues to evolve and expand, providing the next generation of builders with an opportunity to get their vehicles into the BOTB competition. 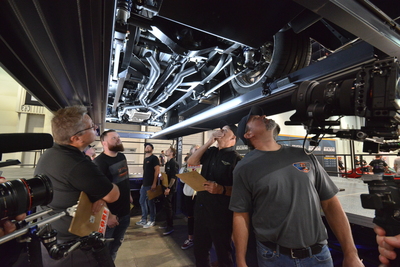 The 12 finalist vehicles were judged one at a time, with every build detail observed and scrutinized by the finalists themselves. New for 2021, judges were able to view the undercarriage of each vehicle.

A panel of industry experts assessed all of the entrants and narrowed down the field of nearly 250 entries to a Top 40 (10 in each category) before selecting the top 12 builds overall. The top 12 finalists were:

The 12 finalists themselves then took over the judging duties for the competition and named Matranga the overall winner. 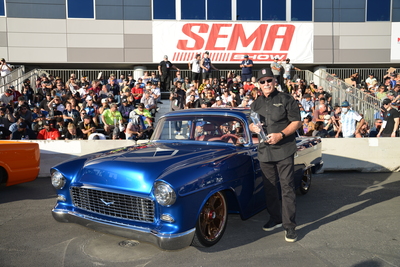 Bob Matranga celebrated his win at Battle of the Builders 2021 alongside his ’55 Chevy Bel Air.

We’ll have full-length features on each of the Top 12 BOTB finalists in the March 2022 issue of SEMA News. For more information about the 2021 competition or SEMA Young Guns program, visit www.sema.org/botb, www.semayoungguns.com or SEMA’s YouTube channel. 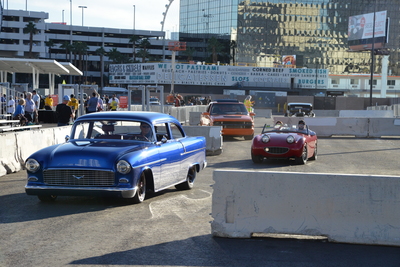 After the Top Four vehicle class finalists were announced, they led the SEMA Cruise motorcade to the site of SEMA Ignited.