An Annual Tradition Makes a Symbolic Return in Las Vegas

The annual SEMA Installation Gala is a long-established tradition where individuals who have made extraordinary contributions to the automotive specialty-equipment industry are recognized and celebrated. But this year’s Installation Gala, held July 30 in the new West Hall of the Las Vegas Convention Center (LVCC), was especially poignant. 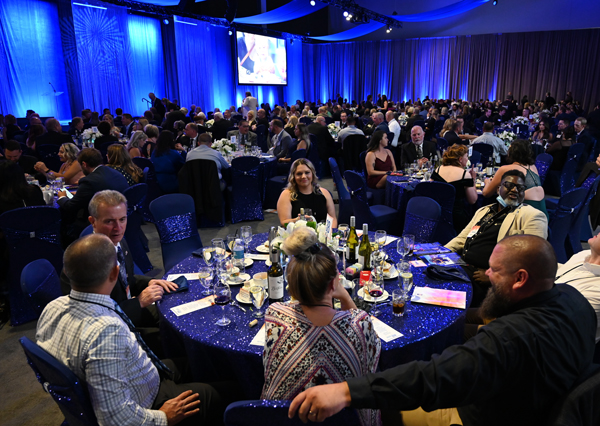 Since 1976, the SEMA Installation Gala has been a celebration of industry volunteerism, leadership and SEMA Hall of Fame legacies. This year, the festivities in the Las Vegas Convention Center’s new West Hall held special significance for an industry reconnecting live and in person.

With famed automotive television and podcasting personality Kevin Oeste serving as emcee, the event marked the first official live industry gathering since 2019—plus it gave a preview of the LVCC’s latest renovations and the major reconnections to come at the 2021 SEMA Show this November 2–5. 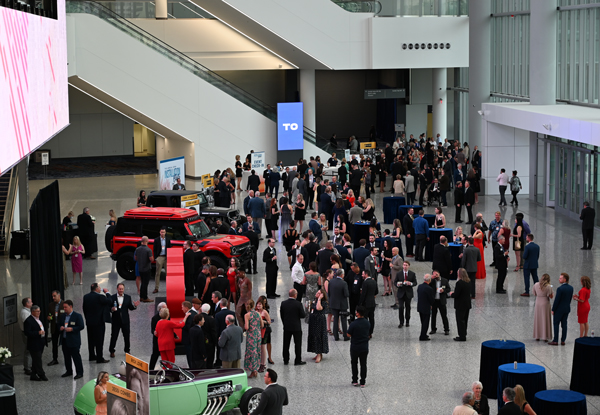 The annual pre-banquet reception was held in the West Hall’s airy main atrium, providing a glimpse of things to come when the 2021 SEMA Show extends its footprint into the new space this November.

The banquet also punctuated a week of SEMA activities held in the expansive LVCC West Hall and the newly opened nearby Conrad Las Vegas at Resorts World conference center. Those activities included the yearly Exhibitor Summit for new SEMA Show exhibitors as well as high-level meetings of the SEMA Board of Directors and council and network leadership. An industry reception featuring the annual SEMA Cares Pinewood Drags (see sidebar on
p. 270) was held in the main West Hall atrium just prior to the gala celebration. 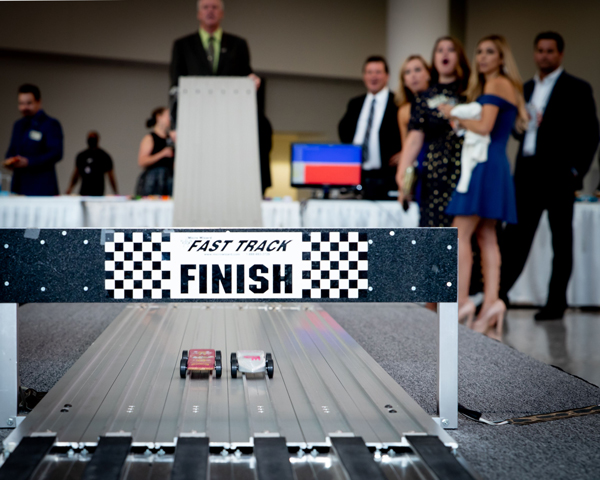 “This event is a special occasion for SEMA,” said SEMA President and CEO Chris Kersting in his opening banquet remarks. “It’s our chance to welcome our new SEMA Hall of Fame inductees and to welcome and give recognition to our Board volunteers.”

Kersting then noted the banquet’s significance after a year of disruptions and unprecedented challenges for the industry.

“We have learned what it means to truly persevere, and we all reminded each other over and over to stay positive, hang tough and keep moving forward,” he told the audience. “On behalf of the industry and the association you all worked so hard to serve, we owe all of you a debt of gratitude.”

Induction into the SEMA Hall of Fame is considered the trade association’s most prestigious honor, and it is reserved for outstanding individuals within the specialty-equipment industry whose creativity, dignity, integrity, industriousness and accomplishments on a national basis have enhanced the stature of, and significantly contributed to, the industry’s growth.

During the course of the evening, tribute was paid to 2020 Hall of Fame honorees Rich Barsamian, Jack Chisenhall, John Gaines and Joe St. Lawrence, all of whose live introductions to the industry last year were prevented by restrictions on public gatherings. The gala then focused on the 2021 Hall of Fame class of four inductees: 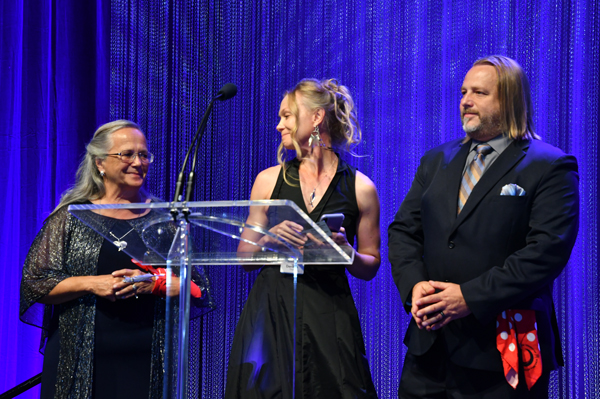 The 2021 Installation Gala was honored by the presence of (left to right) Jessi Combs’ mother, Nina Darrington; sister, Danielle Theis; and brother, Kelly Combs. They accepted Jessi’s Hall of Fame award posthumously on her behalf while recalling her tremendous spirit and legacy.

Jessi Combs built an accomplished career in the automotive industry as the host of several television programs, the founder of a variety of businesses, and an accomplished fabricator and race car driver. A passionate booster of the industry, she served as host for many SEMA events and was an enthusiastic SEMA volunteer and role model, especially for women. In 2019, Combs set a women’s land-speed record of 522.783 mph on an Oregon dry lakebed—a feat that resulted in an accident that led to her untimely death at age 39. 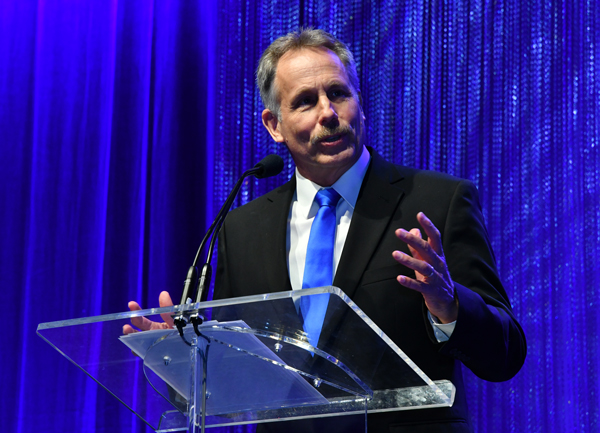 Hall of Fame inductee Rick Love thanked the association not only for the night’s honors but also for all that the industry has given him. The best friendships of his life have been forged in the aftermarket, he said.

Rick Love created a home workshop and leaned on his electronics degree to do wiring and air-condition installations for fellow hot rodders during his youth. He also freelanced as a Rodder’s Digest writer/photographer in the early ’80s. Eventually, his A/C work caught the attention of SEMA Hall of Fame and Vintage Air founder Jack Chisenhall, who introduced Love to SEMA volunteerism. He became a true industry advocate who has never wavered in his service to the industry and to its countless builders and businesses seeking to grow and develop. 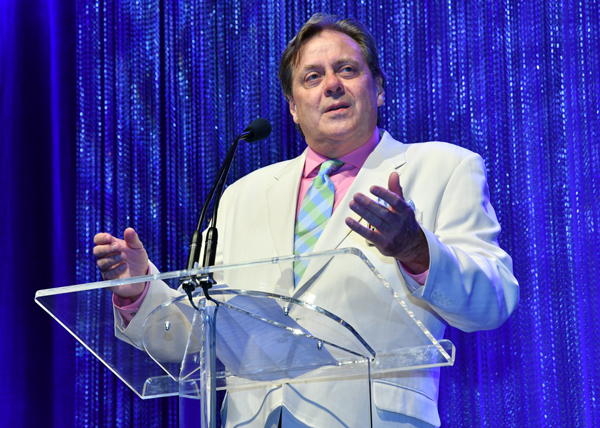 Bob Moore’s passion for the industry shone brightly as he expressed his thanks for his Hall of Fame recognition. Hailed for his pioneering contributions to digital marketing, he reminded the industry that, today, data is everything.

Bob Moore once appropriately authored a monthly Aftermarket Business column titled “Ahead of the Curve.” With the rise of the internet and electronic catalogs in the early ’00s, Moore was a pioneer in establishing standards for automotive-aftermarket product data. As a SEMA Board member and chairman of the SEMA Business Technology Committee, he was instrumental in the adoption of standardized industry data. Moore’s work paved the way for the SEMA Data Co-op (now known as SEMA Data), which transformed how aftermarket brands bring product to market. 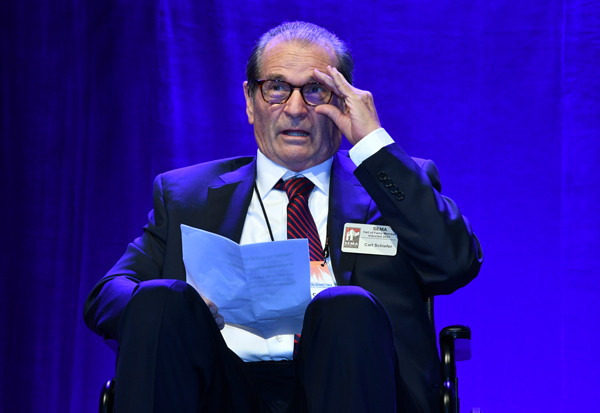 A racer and the founder of Schiefer Media, Carl Schiefer reflected on his career and the honor of becoming a SEMA Hall of Famer. His remarks were punctuated with a warmth and humor that resonated deeply with the audience.

Carl Schiefer is the son of SEMA’s first Hall of Fame inductee, Paul Schiefer. But Carl built a legacy of his own by founding Schiefer Media in 1985 as an enthusiast marketing agency specializing in automotive brands. A racer himself, Schiefer and his agency became instrumental in placing motorsports companies and their products front and center before a mainstream national audience, notably through television advertising—a breakthrough marketing approach for the time. His agency still operates as SCS, with his son James as CEO. 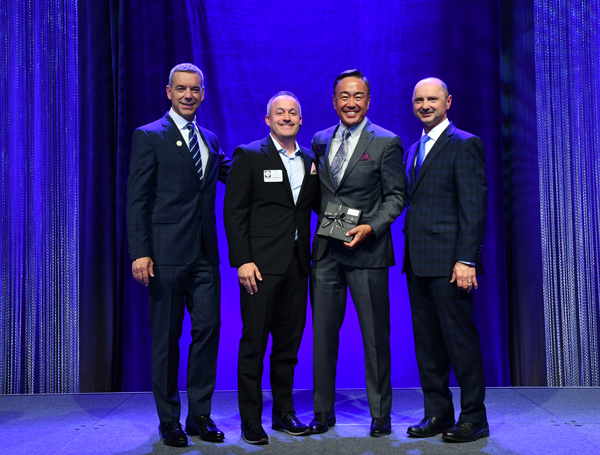 In addition to the association’s Hall of Fame recognitions, the annual Installation Gala traditionally focuses a spotlight on the industry volunteers who take SEMA leadership roles. For 2021, gratitude was extended to SEMA’s outgoing Immediate Past Chairman Wade Kawasaki and departing Board members Dan Kahn, Donnie Eatherly and Brian Lounsberry. Thanks were also expressed to Tim Martin, who, having served his term as Board chairman, now becomes the Board’s immediate past chairman and secretary. 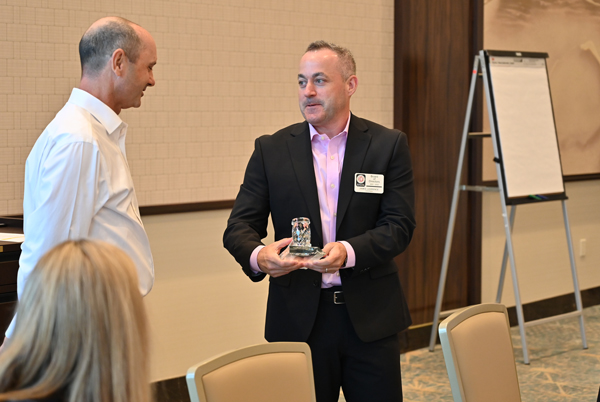 During a Board of Director’s session held July 30, James Lawrence (right) accepted the ceremonial gavel after being sworn in as Board chairman by Tim Martin (left), who became immediate past chairman.

Congratulations went out to former chairman-elect James Lawrence, who now begins his term as chairman of the Board, and Kyle Fickler who becomes the new chairman elect. Incoming Board members Lindsay Hubley (services category), Larry Montante (distributors) and Brian Reese (manufacturers) were likewise welcomed. (See the accompanying sidebar on p. 268 for the detailed list of incoming, outgoing and current Board members and their company backgrounds.)

Amid the salutes to industry volunteers, the evening’s festivities also included an unexpected surprise. Among the banquet’s noted guests was industry icon Ed Iskenderian, founder of Isky Cams and a legend of the motorsports world. Also a founding member of SEMA, Iskenderian turned 100 on July 10, 2021. After a video tribute highlighting his life and achievements, the centenarian was presented with a 100th-birthday cake as the entire room of guests sang “Happy Birthday” and burst into sustained applause. 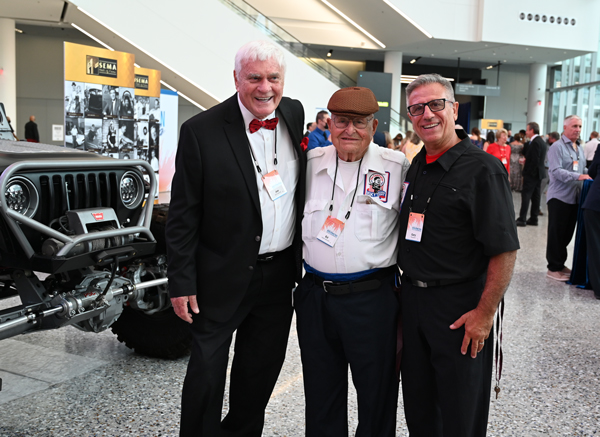 The legendary Ed Iskenderian (center) was among the evening’s distinguished guests. Flanked here on the left and right by SEMA Hall of Famer Joe Schubeck and Gary Topalian respectively, Iskenderian had recently turned 100, a triumph applauded at the gala.

For SEMA Senior Director of Special Events Jamie Eriksen—whose team was instrumental in the event’s planning—the well wishes for Iskenderian epitomized the spirit of the annual gathering.

“This year’s gala was especially inspiring,” Eriksen said. “After a year of being apart, the industry was able to come back together and celebrate the people and volunteers at the heart of our aftermarket community. We were also able to introduce the industry to the amazing new LVCC West Hall and demonstrate our support for Las Vegas. I see it as a symbol of the many meaningful reconnections to come.”

SEMA Board Members Honored at the 2021 Installation Gala

Since 1976, it has been customary to celebrate industry volunteers at the Installation Gala, and this year was no exception. For 2021, the association expressed special thanks to the following outgoing, incoming and ongoing SEMA Board of Directors members:

Members of the Board

Each year, the SEMA Installation Gala takes place in conjunction with the SEMA Cares Pinewood Drags fundraiser. The charity event offers participants the chance to sponsor a Pinewood race car or challenge colleagues head-to-head during the pre-banquet reception.

Donations enable SEMA Cares to help significantly improve the lives of children in need through the work done by the Austin Hatcher Foundation for pediatric cancer; Childhelp for the prevention and treatment of child abuse; and the Victory Junction camp for children with serious medical conditions.

Build It For Me Class