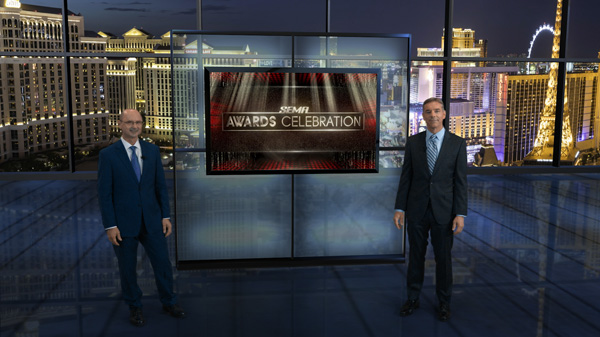 The annual celebration of industry excellence always marks a SEMA Week high point, no matter the venue. With SEMA360 bridging the gap left by a canceled 2020 SEMA Show, the 2020 SEMA Awards ceremony premiered online at the SEMA YouTube channel on Thursday evening, November 5. Emcee’d by automotive media personalities Jarod DeAnda and Kevin Oeste and featuring a musical band, the event struck an inspirational tone as the association honored the industry leaders, legends and innovators who shined amid a challenging year.

“We’re breaking some new ground with our format tonight, and though we really wish we could see you all in person, we think you’re going to dig what we have in store for you,” DeAnda said as he and Oeste opened the ceremonies. “This industry has been through tough times before. We have met each and every challenge with the grit and tenacity that defines our industry—always coming out the other side forged by our passion, our determination and our community.”

Oeste underscored the theme: “Tonight is about celebrating you—our community, leaders and trailblazers who make our industry the best in the world.”

With that, the two hosts handed the stage off to SEMA Chairman of the Board Tim Martin and SEMA President and CEO Chris Kersting, who together addressed the event’s global audience.

Welcoming participants to the event, Martin noted: “Many things have been different this past year, but one extraordinary thing has not changed. Despite the challenges and interruptions of COVID-19, certain individuals and companies in our SEMA world have continued to step up to make important contributions and impact. Ordinarily, the SEMA Awards Banquet in Las Vegas is our chance to spotlight these outstanding contributors. All are deserving of our appreciation, and this year we weren’t going to let COVID-19 deny any of them the recognition they deserve.”

“SEMA members have been exemplary in adapting to the challenges that 2020 has served up, and tonight is no different,” Kersting emphasized. “Instead of being at the awards banquet in Las Vegas, many of our honorees have gathered family and friends in their homes to share this special celebration. In some ways, this virtual event may be even better than a normal year, because lots of folks can’t always make it out to Las Vegas.

“These are folks who have rallied to accomplish a great deal, even when ‘normal’ business conditions are anything but, and demands in so many other aspects of their lives have increased.”

First to be recognized was the 2020 Class of SEMA Hall of Fame inductees, which included Rich Barsamian, Jack Chisenhall, John Gaines and Joe St. Lawrence. Although the four were named to the Hall of Fame in July, the awards ceremony introduced their achievements to a much wider industry audience.

Rich Barsamian has been actively volunteering and helping to improve the industry since he joined the Young Executives Network (YEN) in 1995. He helped bring many educational programs to SEMA members and worked tirelessly as an ambassador to help grow SEMA membership. Over the years, Barsamian earned numerous recognitions for his continued work in the automotive aftermarket, including SEMA Person of the Year in 2014, and he exemplifies the SEMA Hall of Fame criteria with regard to professionalism, dignity, integrity, stature and growth of the industry.

Jack Chisenhall is credited with making climate-control systems accessible by founding the Vintage Air company in San Antonio, Texas, and he also helped create what is now the Hot Rod Industry Alliance, among other innovations and contributions. His work made enthusiast cars more comfortable and easier to drive, and that meant more miles logged behind the wheel, more money spent on modifications, and more time wrenching, driving, building and enjoying the vehicles. His influence was a cultural shift and a true game-changer.

John Gaines was an early pioneer in automotive specialty-equipment warehouse distribution. His company, G&M Performance Parts, was one of the first of its kind in the automotive aftermarket. Gaines’ distributorship was one of the first in the country to utilize a fleet of vehicles to distribute product directly to local speed shops, truck accessory stores, car dealerships and machine shops, creating a much quicker and more streamlined process from manufacturer to end user. Gaines is credited with forward thinking early on that helped many manufacturers grow to where they
are today.

After brief interviews with the Hall of Fame inductees, DeAnda and Oeste turned to the annual industry awards portion of the ceremonies. For 2020, there were four categories: Gen-III Innovator of the Year, Manufacturer of the Year, the Chairman’s Service Award, and the SEMA Person of the Year. The honorees in the first three categories follow below. Myles Kovacs, co-founder of DUB magazine, was named Person of the Year and will be profiled in next month’s issue of SEMA News. 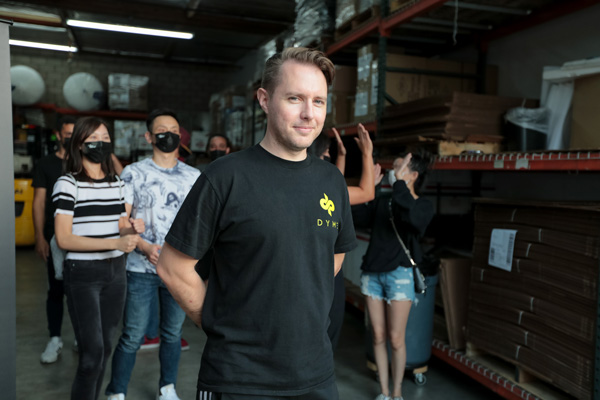 A GEN-III Innovator is defined as an industry individual under the age of 40 who is making breakthroughs in new products, new approaches to business, or trendsetting achievements. Nominees for the award must demonstrate truly innovative thinking that helps lead the industry forward. Awardees are selected by a panel of SEMA Board members and YEN representatives.

The 2020 honor went to Brendan McGrath, CEO of the relatively new-on-the-scene Dyme Performance Systems Inc. McGrath’s innovation brought to market the Dyme Rattlesnake toolkit—a revolutionary new system for designing, ordering and receiving crimped and fully tested high-performance hose assemblies. The product has already demonstrated its engineering and cost-saving potentials to racers, builders and a wide variety of other automotive creators.

Justin Hartenstein, Oracle Lighting director of product innovation, and Matt Kossoff, founder and owner of The Retrofit Source, were finalists for Gen-III honors.

Manufacturer of the Year: Redline Detection 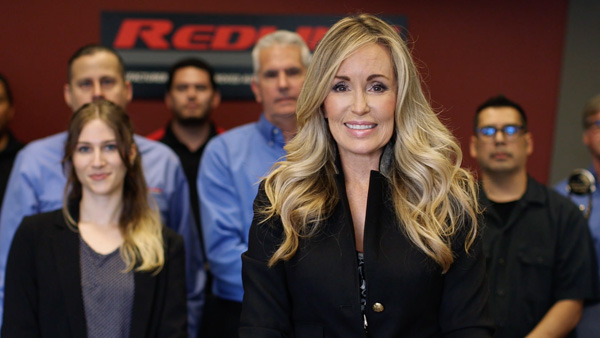 The Manufacturer of the Year award celebrates a specialty-equipment manufacturer demonstrating exceptional performance working with warehouse distributors, manufacturers’ reps and others in the retail community. In addition, the honoree shows leadership within both the overall industry and its aftermarket segment through its high standards in business practices, innovation and customer satisfaction.

For 2020, the award went to Redline Detection, manufacturer of a highly regarded line of professional leak-detection diagnostic equipment. Located in Orange, California, the family-owned company is also known for supporting community causes as well as working to help technicians to grow their businesses in developing countries around the world.

Advanced Clutch Technology and AEM Performance Electronics were finalists for the award. 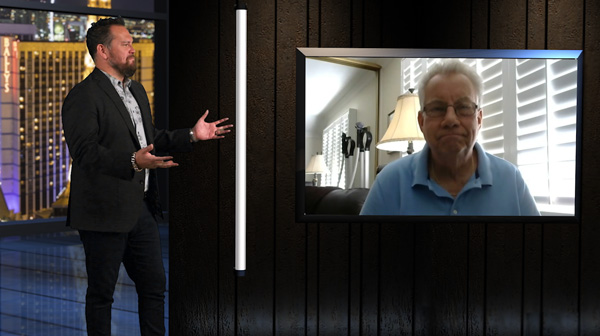 In the ’90s, Thompson established capable oversight of SEMA’s financial reserves by forming the SEMA Investment Committee. He then went on to provide that committee with leadership and guidance up to the present day, helping to build a solid financial foundation for the association that ensures its continuity even in the most difficult times.

With his strong background in commercial real estate development, Thompson also assisted SEMA in the early ’00s with the planning and ground-up construction of the building that today has become the SEMA Garage & Product Development Center. Then, in 2012, he worked closely with SEMA leadership on the acquisition of the PRI Trade Show.

Wrapping up the evening’s festivities, DeAnda commented: “This has been such a cool celebration of so many amazing people. It’s truly an honor to be part of an industry alongside these leaders and legends—and to be part of this big family.”

Oeste agreed, adding: “While this year’s celebration was nontraditional, it was still very special. And to everyone in the audience: Keep pressing forward, keep innovating, keep building, keep pushing the boundaries, and turn it up!”

The SEMA Hall of Fame Industry Awards Ceremony went online for 2020, breaking new ground with its November 5 premier on the SEMA YouTube Channel. Welcoming event participants, SEMA Chairman of the Board Tim Martin (left) and SEMA President and CEO Chris Kersting emphasized the industry’s determination, innovation and accomplishment in an unusual year.

Video of the 2020 SEMA Awards celebration can be viewed on the SEMA YouTube Channel at www.youtube.com/sema.

Each year, SEMA’s councils and networks recognize members whose volunteerism and achievement help advance their specific industry segment. During SEMA Week, these award winners were announced through the SEMA360 council and network pages, which also featured recorded interviews with the recipients. The honorees included the following: