Founded by Alex Shen 18 years ago, SP Engineering began as a tuner shop in a humble 4,800-sq.-ft. facility with three employees in City of Industry, California. The company has since expanded into retail with a 13,000-sq.-ft. facility, five lifts and 13 employees.

Business has changed drastically for SP Engineering since the Nissan GT-R launched in 2008. The company previously worked with a mixture of Japanese cars and European exotics, including the 2JZ, RX7, 350Z and V12 Lamborghini. Since 2008, the GT-R has represented about 90% of SP Engineering’s market.

In an effort to further reach consumers, SP Engineering has developed an online retail store for enthusiasts of the GT-R (www.r35tt.com) as well as Lamborghini and McLaren (www.sp-power.com) to inform them that the company still works on these cars and sells products for them.

SP Engineering offers a full build on a variety of cars, handling tuning and the building of engines and transmissions under one roof. Certain specialty parts—fuel cells, for example—are made in-house, while mass-produced parts may be outsourced for manufacture.

“We essentially manufacture our own parts and build cars upward from 700 to 1,600 hp, continually improving upon what we do with the car,” said Rory Rodgers, who handles sales and marketing for SP Engineering. “A lot of times, we’ll take care of other parts of the car, including suspension, brakes, body and interior. We give [customers] a completely new car. Our goal is to figure out and deliver on the end results of what they want from the car. There’s a lot more to it than just getting 1,200 hp on the dyno.”

The GT-R has gained such wild popularity that SP Engineering largely credits its launch for one of the primary reasons the company survived the 2008 recession.

“All our energy was put toward that,” Rodgers said. “In 2008 with the GT-R, rather than working on a bunch of different cars with all off-the-shelf-type products, it got more into stuff that we do here and a lot of little tricks that don’t get disclosed. If you want it, you have to come to us.”

“Other companies offer similar stuff, but it’s not the same,” Rodgers said. “When you have someone who wants to hit a certain number and it’s an array of different parts, it’s hard to figure out lead times and exactly how much money and labor will be put into the car when you have these custom builds. But when you have set packages that we’ve done over and over, you know your exact costs, how much money you’re going to make and when you can deliver the car. Knowing those things and limiting the cars that we work on helps.”

Evolving With the Market

SP Engineering used to do a significant amount of wholesale business that catered to smaller companies, but that died down when manufacturers started opening their doors to everyone after the recession.

“We had to evolve with the market,” Rodgers said. “It’s 2015, and we’re still here. A lot of the wholesale guys either fell out or had to downsize to the point where they’re not leaving a mark in the industry.”

According to Rodgers, the company’s biggest challenge is consistently staying up-to-date with the market and having to compete when certain cars get older, such as the GT-R, which is coming into its seventh year. There is an influx of imitations available at lower prices, and second and third owners of these vehicles don’t have the same purchasing power as first owners. More used parts start hitting the shelves. Those factors all affect businesses that are trying to develop new products and stay at the forefront of the market. They can’t bring in the same kind of money because people are getting builds done more cheaply.

Take Care of Your Clients

According to Rogers, the way SP Engineering takes care of its clients is what sets it apart from its competitors. The demographic is diverse; for horsepower builds of 1,000 or more, customers generally tend to be business owners in their mid-30s to early 50s. With simple bolt-ons and lift kits, the customer base varies across the board. Regardless, SP Engineering’s technicians take the time to describe to clients the process of what they’re doing.

“It’s the correct way to go about it if you are selling something to someone,” Rodgers said. “It’s not about just trying to make a buck; it’s about best fitting their needs in every single way.”

With some of the higher-end builds, they’re out there with their clients, providing trackside support. Some customers have GT-Rs with 700 hp, and others with 1,500 hp, but they all know each other.

“We bring everyone together,” Rodgers said. “We go out to the track, and we might have seven or eight clients there, then we’ll go out to eat afterward. It’s a level of service. Outside of building the car, we’re always there for them to give advice. We’ve gotten calls from our tuner at midnight that something happened with one of our guys on the East Coast. He’ll walk them through everything and make sure it’s taken care of. On my end, I’ve been called at 6:00 a.m. or on the weekend by a client who has some issues, and I’m completely fine taking care of them.

“Because we are a small company, a lot of us here, no matter if we’re on the clock or not, we’re always representing our work. It means a lot to everyone here. They want the business to grow. It’s not about what you can do for yourself; it’s about what you can do for the business. As long as we’re successful, everyone will be taken care of. That mentality translates over to how we take care of the people who choose to work with us, because we know how important every single person is.”

At the same time, Rodgers admitted that the company has to protect itself from liability issues. For instance, if someone brings in a 1,200hp GT-R for tuning that was built somewhere else, SP Engineering may have to turn down the work because the technicians don’t know anything about the car’s history or the people who built it.

“We stick with just the cars that come through with us,” Rodgers said. “We try to live up to the slogan of being an innovator, not an imitator. As long as we keep that kind of mindset, I think we will consistently evolve with the market.”

To maintain relationships with clients, Rodgers advised that businesses hold onto their word and be transparent whenever possible. If you say you’re going to be somewhere, be there. At the end, if everything goes well, everyone wins. On the business side, everyone has to make a buck, he said, but it’s imperative that customers are always happy with what they get.

Technological advancements, such as the R36 GT-R’s anticipated hybrid drivetrain, can make tuning more difficult, according to Rodgers, which may cloud the company’s future direction.

“It depends on what the manufacturers will allow us to do,” Rodgers said. “If we can’t properly tune a car, if all we can do is slap on an exhaust, throw on some wheels or a lift kit, that’s not what we’re about. We’re still going to always have a chassis that we consistently build up and not just offer the basics that everyone else offers. We want to ensure that we make use of the expertise we have here with transmission building, engine building, tuning and be able to offer that on whatever car we choose.”

At the same time, Rodgers said that the company wants to be a large distributor of a few different product lines. It’s necessary to carry inventory, which many companies lack. SP Engineering has to find a way to always stock at least a few lines to keep wait times down so that customers don’t have to wait weeks for certain products. Expansion isn’t out of the question in order to house product appropriately.

Rodgers said that the biggest key to success for retailers just starting out is to know their clients’ likes and wants and deliver on that. If someone wants 800 hp, can it safely be done? Is that going to keep them happy long term?

“Everything is long term; I don’t look at anyone as short term,” Rodgers said. “My goal is to always build as much clientele as I can where they trust me and they can call me and ask me questions and hopefully I’ll always have an answer and can deliver on what it is they want. Looking to make a quick buck will always lead to failure and probably tarnish your name in the end.” 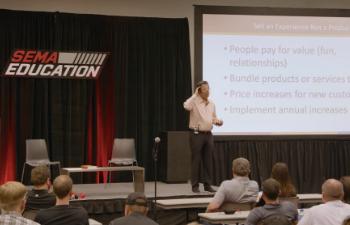