Off Road Warehouse Offers It All for Racers, Enthusiasts and Hobbyists

Off Road Warehouse (ORW) has been in business for more than 43 years. Off-road enthusiast and desert racer Howard Hughes (no relation to the business magnate and aviator) founded the company when he tired of having to get parts through mail order and recognized that others who raced and off-roaded felt the same. He started with a small location in a suburb of San Diego, California, and eventually opened two more stores in the area.

Businessmen Randy Weisser and Nate Mullen bought the business in 2007. Weisser had also been a Baja racer and still owns other enterprises in addition to Off Road Warehouse. A year or so after making the ORW acquisition, he and Mullen opened a fourth location, this time in Temecula in the Inland Empire region of Southern California. The timing turned out to be rather precarious as the Great Recession swamped the economy, but the store prospered despite the general malaise and is now one of the chain’s best.

“Off Road Warehouse is eclectic with its array of parts,” said Kevin Lessard, the company’s general sales manager. “We cater to every aspect of off-roading as well as the fabrication of parts for all types of vehicles. The Temecula store has become a mecca of fabrication for the Inland Empire.”

The company employs 54 technicians, salespeople and Internet experts at its locations in El Cajon (6,450 sq. ft.), Escondido (8,300 sq. ft.), San Diego (17,250 sq. ft.) and Temecula (6,200 sq. ft.). While each store uses a standard set of point-of-purchase displays from the well-known vendors they have in common, they have also been tailored to suit the interests of the customers where they are located, and so each has a unique design.

Displays are set up both by product type and by vehicle type. For instance, the El Cajon store is targeted at desert off-roaders and racers, and the San Diego store predominantly deals in Jeep products. As previously noted, Temecula is very much set up for fabrication, and the Escondido store caters to a lot of Volkswagen-based vehicles, both Baja bugs and VW-based desert-race classes. But each store can also handle any request.

“If a customer comes in with a vehicle and tells us what he wants—a custom bumper, lightbar or suspension components, for instance—we’ll do it on the vehicle in the store,” Lessard said. “We’re not just selling parts. We’re actually doing the fabrication and installing custom equipment on the vehicle. Most of the time, when it’s a truly custom-fabricated part, it will be for a dedicated off-road vehicle, and the customer will leave it with us until the job is complete. That might take a few days or a week. We also work with a lot of local fabricators, race-vehicle builders, powdercoating shops, Line-X guys and local muffler shops to ensure that the customer gets what he’s asking for.”

As with its diverse inventory, ORW’s customer demographics run the gamut from enthusiasts and racers to hobbyists, though each store’s customers reflect regional interests.

“The Temecula store has a youthful clientele,” Lessard said. “As the Inland Empire grows, it lends itself to younger people who are getting into racing and off-roading. Escondido, El Cajon and San Diego are demographically older. In all cases, though, we’ve been able to adapt to changes in the markets as they’ve evolved through sport trucks and lowered trucks and then lifted monster trucks, pre-runners and Jeeps. We adapt to the demographics that fit the vehicles.”

Lessard said that the Jeep JK is now the company’s bread-and-butter vehicle, and it has changed the sport.

“When Jeep came out with the four-door in 2007, more families—husbands, wives and their kids—began to share in the hobby,” he said. “Clubs are now catering to those vehicles, and they’ve grown probably 50% in membership over the last seven years. Children who grew up with off-roading are now starting families of their own, so the Jeep clubs are seeing two generations of members, and so are our stores.”

Lessard said that about 65% to 70% of ORW’s business comes from repeat customers, but utility task vehicles (UTVs) have also been a growth area. ORW has been carrying a UTV line for about three years, and accessory sales have doubled every year. Recreational users are the mainstay of that niche, with the most popular products currently, including doors, rollcages and lighting.

Even so, the crossover to UTVs is still a gray area for ORW’s customers, Lessard said.

“Their UTVs are purchased at motorcycle dealerships, so they feel that they need to purchase their aftermarket accessories there,” he said. “However, they need trucks to get their UTVs to where they’re going to play with them, and they find that we sell UTV accessories when they come in to customize their trucks.”

ORW places its greatest marketing emphasis on events, including races, poker runs and club meetings. The San Diego location is highly involved with Jeep clubs, for instance, but there are a lot more racers at Temecula, so the company sponsors and supports racing at various venues in that area. The El Cajon store takes part in a lot of the events that are held in the Superstition Mountains, and the Escondido store services a big concentration of desert race-vehicle builders and sponsors many individual racers.

“We’ll have a booth and also offer services at a lot of these events,” Lessard said. “We’ll bring a couple of mechanics to help our customers and other attendees. If a guy is out ’wheeling and breaks his Jeep, we can limp him back to us, fix the vehicle and get him back out on the trail. We bring replacement parts but also introduce new products with some of the vendors who attend with us. We also do giveaways and raffles, which is a huge part of giving back to the community.”

In addition to outside events, the company hosts customer-appreciation and military-appreciation days at each of the stores.

“We try to do them at least three times a year at each location,” Lessard said. “In September, all four locations will have one on the same day. We’ll have barbecues and raffles, and we’ll bring out all kinds of custom vehicles. We’ll also have vendors talking with the customers and displaying new products.”

As with other companies, the Internet has changed the sales picture at ORW, with the web now being a predominant revenue source and the company hoping to launch a brand-new site later this year. Its Internet operations are run from the San Diego location, where seven staffers are dedicated to web sales and occupy the entire upper floor of the building.

“We service a lot of out-of-country customers through our Internet business,” Lessard said. “In addition to customers all over the United States, we have clients in China and Europe, and our Internet division deals with all of that.”

ORW trains its employees through its own “university.” The curriculum consists of seven to 10 days of classroom instruction as well as hands-on practical training.

“We advertise for new employees in local media as well as in offroadcareers.com and the SEMA.org classifieds,” Lessard said. “The applicants are generally enthusiasts, and we try to fill the various positions with appropriate people. We have salesmen, technicians and the Internet guys, and each person is trained for specific jobs.”

Sales training is a particular emphasis at ORW. New hires are taught about the company’s computer system and the various parts each store inventories, but there is also a program of package deals that ORW has developed with its vendors.

“With just a couple of keystrokes, our salesmen are able to show customers complete builds based on their vehicles,” Lessard said. “They can then switch out wheels and tires, change shocks or add specifics to the design. That makes it very simple for a salesperson to select parts accurately and allows us to support the vendors that we believe are best for a specific vehicle.”

As with many businesses, ORW’s product offerings are chosen on the basis of experience, customers’ demand and the new products that vendors introduce. ORW has its own warehouse near the Escondido store, but it also deals with outside warehouse distributors, such as Transamerica, Competition Specialties and Keystone. In addition, each of the stores maintains sufficient inventory for the types of vehicles that it traditionally services. Intercompany deliveries reach each store daily from the Escondido warehouse, so products are available quickly if they’re not already in stock.

“This has always been a want industry, not a need industry,” Lessard said. “Our biggest challenge is to keep our ears to the ground and really listen to our customers. We’ve developed a reputation for being honest and providing excellent customer service. Even through the recession, we didn’t just survive—we grew. We’ve developed a reputation in the industry as the ‘go-to guys.’”

Off Road Warehouse has also flourished through diversity. From VWs and race trucks to Jeeps and custom fabrication, the company does it all. With more than 40 years of service, ORW helps design and build its customers’ dreams, whatever they may be. 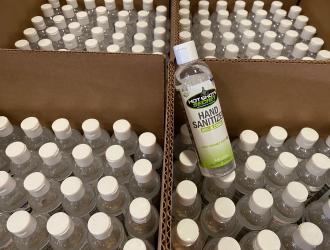