The Los Angeles Convention Center in downtown Los Angeles was the site of the 2011 Los Angeles Auto Show. Press days were very well attended by the media, with the majority of manufacturers announcing increased sales, new models and optimistic outlooks. We went to see what new cars might be on tap that would interest SEMA members and enthusiasts in general…and we found quite a few.

Ford displayed a modernized line of Mustangs that feature a new exterior, updated technology and new driver tools for 2013. The ’13 Mustang, in all its variations, will go on sale in the spring of 2012. Perhaps most interesting to enthusiasts will be the Boss 302 and 650hp Shelby GT 500.

The ’13 Boss 302 drew considerable attention at the show, paying homage to the ’70 Boss 302 with a hockey-stick graphics package. The newest Boss engine yields 444 hp and 380 lb.-ft. of torque but is designed to deliver a smooth idle and low-end torque for comfortable around-town driving. A race-inspired clutch with upgraded friction materials transmits power with a short-throw, close-ratio, six-speed manual transmission. Power is delivered to a 3.73-ratio rear axle with a torque-sensing (Torsen) limited-slip differential.

Working to make the Boss the best-handling Mustang ever, an enhanced version of the GT suspension is used, with higher-rate coil springs on all four corners, stiffer suspension bushings and a larger-diameter rear stabilizer bar. Boss models are lowered by 11 mm in front and 1 mm at the rear versus the Mustang GT. Adjustable shocks and struts will be standard on all Boss Mustangs. Pirelli PZero summer tires are sized specifically for each end of the car, with the front wheels receiving 255/40ZR19 tires while the rear gets wider 285/35ZR19 rubber. Brembo four-piston calipers are matched with 14-in. vented rotors up front. In back, standard Mustang GT brakes are upgraded with a Boss-specific high-performance pad compound.

The GT 500 represents another move in the game of one-upmanship in the musclecar world. Carroll Shelby was on hand to give the crowd a wave at pre-show media days—a fitting moment to announce more about the Shelby GT500, described as “the ultimate Ford Mustang with the most powerful production V8 engine in the world.”

Ford says that the GT500 will be geared for everyday drivers and track-day enthusiasts alike. The newest Shelby offers 650 hp, top speeds of 200-plus mph and optimized vehicle systems.

Next Up for Subaru: BRZ

Subaru revealed a “concept” called the BRZ—Subaru’s edition of a car jointly developed with Toyota that will also be offered by Scion. The auto show audience was told that the concept is very close to the actual vehicle as it will appear in Subaru showrooms in May.

The driveline seems to be all Subaru, with its trademark horizontally opposed boxer four-cylinder engine. The engine is a normally aspirated 2.0L. Brakes are by Brembo, and the suspension is STI-developed.

The Scion version of the joint venture was revealed November 30, and it’s likely that a SEMA Measuring Session will take place in the spring. Subaru/Scion tuners should stay tuned for more information on that subject. Word is that the BRZ and the Scion will be driftable rear-wheel-drive cars.

Regardless of how the two companies decide to divvy up the packaging and marketing chores, the new BRZ promises to carry on the WRX tradition of seriously fun, relatively affordable sport-compact cars.

Land Rover unveiled two concept vehicles intended to signal what the company might do about replacing the beloved military-grade Defender 4x4s, which were never adapted to comply with North American federal regulations. The two DC100 concepts unveiled were designed to retain essential elements of Defender and allow Land Rover to discuss and inspire dreams of a future Defender. The concepts were designed around 2.0L, four-cylinder gasoline and diesel engines with hybrid and plug-in capabilities.

Both concepts feature three-across front seating for increased versatility. The middle seat lifts to reveal a secure stowage area, while the outboard passenger seat can be folded away to increase carrying capacity. Historically, Land Rovers have been designed to accommodate a large catalog of accessories and upgrades.

Both interiors feature rugged, durable and sustainable modern materials designed for comfort. Those chosen for the DC100 are the latest in high-tech, tough fabrics that will survive a lifetime of the roughest treatment. In the shorter-wheelbase DC100 Sport, the materials are more luxurious, featuring leather with a subtle Tribal Tech pattern, referencing a legacy of exploration.

What the future holds for Defender fans in North America remains unclear. Land Rover confirmed its global intention to launch a new Defender in 2015 but with no current decision on whether or not the next generation Defender will come to the North American markets.

Chevy revealed the ’12 Camaro ZL1, now available as a convertible. The ’12 Camaro ZL1 Coupe accelerates from 0–60 mph in 3.9 seconds and can reach a top speed of 184 mph. Pricing starts at $54,995, including Performance Traction Management and Magnetic Ride Suspension.

“From the original Camaro to the current Corvette ZR1, Chevrolet has a long history of delivering world-class cars that outperformed competitors at several times the price,” said Chris Perry, General Motors vice president of global Chevrolet marketing and strategy.

“The ZL1 is no exception. There are very few cars at any price that can match the power, features and track capability of the Camaro ZL1.”

Chevrolet spokespeople noted that for the price, which includes the $900 delivery fee, the ZL1 compares favorably to much more expensive cars, such as the Audi R8 GT and the Mercedes SLS AMG.

The heart of the Camaro ZL1 is a supercharged 6.2L engine, SAE-rated at 580 hp and 556 lb.-ft. of torque, making it the most-powerful production Camaro ever. The LSA engine features a Roots-style blower with an efficient four-lobe rotor set and compact intercooler. The ZL1 also features a standard dual-mode exhaust system, with vacuum-actuated valves in the exhaust pipes for a refined exhaust note at low speeds as well as a free-flowing system for peak performance. Power is delivered to the rear wheels through either a six-speed manual or an automatic transmission.

Just two weeks after the diminutive Fiat 500 was named “Hottest Sport Compact” at the 2011 SEMA Show, head of Fiat Brand Worldwide and Fiat Chief Marketing Officer Francois Olivier unveiled the 500 Abarth at the L.A. Auto Show. Aimed at enthusiasts, the Abarth is named after Carlo Abarth, who tuned and raced the original Fiat 500 when it was first introduced in 1958. 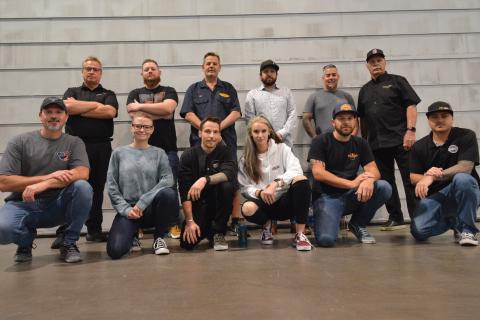 Events
Battle of the Builders: The 12 Finalists and Their Custom Creations
March 2022
View Article