Ringbrothers was presented several top awards at the 2022 SEMA Show in Las Vegas for two out of four of its most recent unveiled custom builds—a ’48 Chevrolet Loadmaster dubbed “ENYO” and a ’72 Chevrolet K5 Blazer code-named “BULLY.” The Wisconsin-based team’s build “ENYO” took home top honors for a variety of custom builder categories, including winning SEMA’s Battle of the Builders Presented by Mothers Polish as the 2022 Best Overall Build while also winning its class of Hot Rod & Hot Rod Trucks en route to being crowned the competition’s Grand Champion. 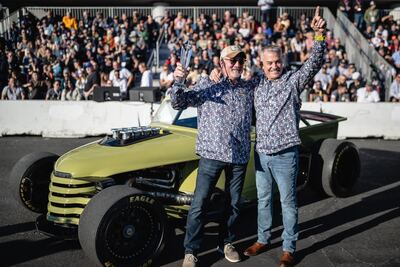 “Year after year, the SEMA Show gives us the opportunity to showcase what we are most passionate about,” said Mike Ring, co-owner of Ringbrothers. “This year, we had the opportunity to unveil four of our most extreme builds, both in design and execution. With the support from our partners and the enthusiast community, we continue to push the boundaries of custom car building which is what we originally set out to do.”

Bearing the name of the Greek goddess of war, the 1,010hp ’48 Chevrolet pickup “ENYO” was nearly 10 years in the making. Built through 10,000 laborious hours, the “anti-street rod” is chopped, channeled and sectioned to redefine the American classic. ENYO features CAD-designed trim and parts that were all cut in-house at the Ringbrothers machining facility to the way they seamlessly managed to mate a big-box truck cab and massive drivetrain successfully on a low-slung, Indy Car-style chassis. The pickup is powered by a Goodwin 1,000hp tall-deck racing engine and crafted using extensive carbon-fiber components.

“BULLY,” on the other hand, expresses extensive restomod build features with a 6.8L LS3 V8 topped with a massive 2.9L Whipple supercharger and heavy-duty off-road suspension. The four-wheel-drive Blazer makes 1,200hp. Other highlights of the labor-intensive build include a new chassis, four-link suspension, bespoke interior, heavy-duty drivetrain and many unique parts. This one-of-kind Blazer also won its class of 4 Wheel Drive & Off-Road in the Battle of the Builders Presented by Mothers Polish competition.