The SEMA Battle of the Builders Presented by Mothers Polishes top 12 finalists have been announced. The action continues to unfold throughout the week, with cameras following along to document the journey for a TV program set to air on Saturday, January 28, 2023, at 9:00 a.m. EST. (Visit www.semabotb.com for updates on TV airings.) 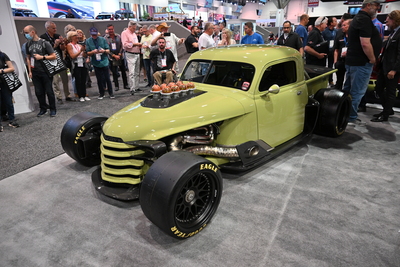 Ringbrothers' ENYO 1948 Chevrolet Pickup Loadmaster is among the top 12 SEMA Battle of the Builders Presented by Mothers Polishes finalists.

The competition recognizes one winner in four different categories:

While a panel of industry experts narrows down the selection of vehicles, it’s the builders themselves who ultimately select the four class winners as well as the overall winner. The top 4 will be announced Thursday, November 3, at 3:00 p.m., in North Hall #10139, and the winner will be crowned on Friday, November 4, at 3:30 p.m., on Silver Drive.